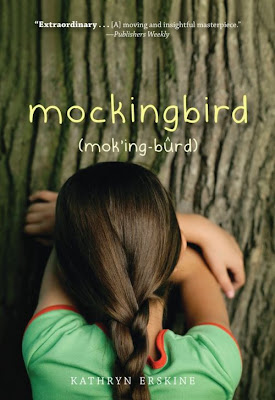 In Caitlin’s world, everything is black or white.  Things are good or bad.  Anything in between is confusing.  That’s the stuff Caitlin’s older brother, Devon, has always explained.  But now Devon’s dead, and her father cries a lot.  Caitlin wants to get over it, but as an eleven-year-old girl with Asperger’s, she doesn’t know how.  When she reads the definition of “closure” in the dictionary, she realizes that is what she and her father need.  In her search for Closure, Caitlin discovers that not everything is black and white--the world is full of colors--messy and beautiful, and it is through this discovery that she embarks on a road which leads her to find both healing and Closure.

Her brother was shot at school, by a fellow classmate. He left behind a half-finished Eagle Scout wooden chest, one little sister who is not allowed in his room and a father who now cries all the time.

Caitlin can’t understand how Devon died; the doctors said he had a hole in his heart that couldn’t be fixed or filled. But every time she walks past his closed bedroom door she half expects him to swing it open and invite her into his room, to read from his favourite book, ‘To Kill a Mockingbird’.

Caitlin can’t get used to life without Devon, but she’s trying. She goes to school and sees Mrs Brook, the counsellor who talks about feelings and how to express them. But Caitlin has never really understood how other people work, let alone how she’s meant to work. Caitlin relies on the dictionary and her precise drawings to understand the world. Feelings just get in the way and make things confusing.

Also not helping matters are the kids at school. Josh is the cousin of the boy who shot Devon, and he’s become meaner since the shooting, getting in other kid’s personal space. But there’s also Michael, whose mum was a teacher that died the same as Devon. Michael is younger than Caitlin, but they get along minding each other’s manners.

Caitlin is trying to get used to life without Devon, but her dad isn’t helping. He doesn’t make dinner on time anymore, and the TV news has him crying at the drop of a hat. When Caitlin discovers the word ‘closure’ in the dictionary, she’s sure it’s just what she and her dad need. . .  and she thinks the best way to get it will be by finishing Devon’s wooden Eagle Scout chest.

‘Mockingbird’ is the middle-grade book from Kathryn Erskine, which won the National Book Award in 2010.

Kathryn Erskine lives in Virginia, and was deeply affected by the 2007 shootings at Virginia Tech where 32 people were killed, and 25 others wounded. This event deeply impacted on Erskine, and in her author’s bio it says she was “driven to understand how community and family – particularly families with special-needs children – dealt with this violent event. . . ”

Erskine also has a daughter with Asperger syndrome, which is an autism spectrum disorder (ASD) that is characterized by significant difficulties in social interaction. Thus, in telling a story about how people reconnect after tragedy, Erskine thought to include a young protagonist whose very unique perspective of the world makes it difficult to connect at the best of times. ‘Mockingbird’ is told in first person through Caitlin’s unique voice, and the result is a novel of shattering brilliance.

We meet Caitlin shortly after Devon died in a school shooting – leaving Caitlin and her father to pick up the pieces of their fallen-apart life. But Caitlin and her father aren’t doing so well at picking up the pieces. A constant reminder to all that they have lost sits in the middle of their lounge room, a half-finished wooden chest intended for Devon’s Eagle Scout project.

At home I think about Devon’s Heart. I sit on the sofa and look at his chest. It’s still under the gray sheet. There are rays of light coming in through the blinds and the dust swirls around in the beams and hits the chest and I wonder if any of the dust particles are Devon and if I can feel him.
I close my eyes and remember some of the things that happened on The Day Our Life Fell Apart.


The chest becomes a symbol for everything Caitlin and her father have lost. It’s as hollow as the doctor’s say Devon’s heart was after the shooting, a CAVernous chest that cannot be filled or healed.

Caitlin is set adrift in this world without Devon. He used to say that they were like Jem and Scout from his favourite book, ‘To Kill a Mockingbird’. Like the kids in that book, Devon and Caitlin’s mother died when they were young, and ever since they only had their father . . . only, Jem didn’t die in the book and leave Scout all alone and Atticus crying into the night. Caitlin misses Devon; she misses her brother who used to tell her how to act around other people and when to stop throwing a tantrum. She misses her dad being her dad and not this person who cries at the TV news.

As the story progresses, Caitlin unwittingly finds herself connecting with other children affected by the school shooting. A younger boy at school called Michael lost his mother in the shooting, and Caitlin’s fellow classmates jump at loud noises, thinking it’s a gunman returned. But Caitlin still needs closure for her and her father – and she’ll get it by fixing Devon’s chest.

Erskine has beautifully crafted this book of black and white. Caitlin may prefer to see the world without colour and confusion, but she has a deceptively deep perception of what goes on around her. She draws pictures precisely and has her own understanding of how words work (even when her teacher’s tell her differently);

She has put an X over the H in Heart and written a lowercase h. It doesn’t look right that way. I’m sure she’s wrong about the special words and capital letters even though she’s a teacher. How can any word be more special than Heart?


‘Mockingbird’ had me blubbering and laughing throughout the whole book – Erskine’s stunning narrative regularly sits on the knife-edge between tragedy and beauty, hilarity and heartbreak. It’s amazing how quickly a scene can be flipped on its head – like when Caitlin decides to literally get some quarter-cut pine – her unique perspective of the world turns from endearingly calamitous to gut-wrenching.

Kathryn Erskine’s ‘Mockingbird’ is a novel about connecting. It’s about picking up the pieces after tragedy and finding a way to move on, with the help of other people. I adored this book, despite all the tears it wrought from me. I also had a few laughs at Caitlin’s endearing antics; she’s one of the best protagonists I have read in a long time, and Erskine’s precise Asperger’s narrative is masterful. This is an absolutely must-read book.

Email ThisBlogThis!Share to TwitterShare to FacebookShare to Pinterest
Labels: Kathryn Erskine, YA