'Once' series by Morris Gleitzman

Then the Nazis came


Felix is hiding. His parents left him at a convent with other orphans, and then they fled. Because Felix is Jewish, and it’s not a very good time to be Jewish at the moment, what with the war and all.

When Felix receives a sign (in the form of a whole carrot) he is sure it means his parents are returning for him. So he takes his beloved notebook, full of fanciful stories, and he leaves the convent to go in search of his parents.

Along the way he sees the truth of the war. He watches people marching, and soldiers fighting. He comes across a burnt down farmhouse, and finds Zelda – a young girl whose parents have been killed. Felix takes Zelda with him, in search of his parents, and on the promise that they’ll find Zelda’s… even though Felix knows that’s not possible. And the more they wander, the more Felix dreads finding out what really happened to his parents…

Morris Gleitzman’s ‘Once’ trilogy began in 2005, and was followed by ‘Then’ and ‘Now’. In 2012 the trilogy will be expanding, with one more book called ‘After’.

1.5 million Jewish children died in the Holocaust. Morris Gleitzman’s Jewish grandfather lived in Poland, but fled the country before the war. But his extended family perished in the Holocaust. Felix and Zelda are not real, but in writing ‘Once’ Gleitzman was inspired by true events and real-life heroes.

‘Once’ begins with Felix at an orphanage. He knows he is hiding amongst Catholics because he is Jewish, and for some reason Hitler doesn’t like Jews. But Felix has no comprehension of the true scope of the war, or of how Hitler’s Europe has turned against the Jewish people. It’s only when he interprets a carrot miracle and decides to leave the convent in search of his parents that Felix sees the truth of what the world has become.

Along the way he finds Zelda, a young girl who Felix discovers lying beside her dead parents in the midst of a burnt-down farmhouse. Together they escape Nazis, hide in a dentist’s basement and form a bond of friendship in the midst of war.

Throughut the first two books, ‘Once’ and ‘Then’, Felix and Zelda are searching for their parents. They meet characters along the way, and stumble into situations that have them uncovering the truth of this war, and how it’s impacting Jews;

We pause at the edge of the trees and squint down into the next valley. My glasses are smudged.
I take them off and polish them on my shirt.
Zelda gives a terrified squeak, and grabs me and points.
I put my glasses back on and peer down at what she's seen.
Zelda isn't pointing at a distant house belonging to a kind cook, because there aren't any houses.
She's pointing at something much closer.
A big hole in the hillside. A sort of pit, with piles of freshly dug earth next to it. Lying in the hole, tangled up together, are children. Lots of them.
All different ages. Some older than me, some even younger than Zelda.
'What are those children doing?' says Zelda in a worried voice.
'I don't know,' I say.
I'm feeling worried too.
They look like Jewish children. I can tell because they're all wearing white armbands with a blue blob that I'm pretty sure is a Jewish star.
Trembling, I give my glasses another clean.
'This wasn't in your story,' whispers Zelda.
She's right, it wasn't.
The children aren't moving.
They're dead.


Gleitzman’s ‘Once’ series has become hugely popular, both in Australia and overseas. The books have even been named in the prestigious Sydney Taylor Honor Books for Teen Readers. This series really is amazing… Gleitzman is looking at the Holocaust from a child’s perspective, and it’s made all the more horrifying and heartbreaking for Felix and Zelda’s naiveté and innocence.

The story is also brilliant for the secondary characters Gleitzman peppers throughout. A few seem to be inspired by real heroes of WWII, like Janusz Korczak who was a Polish-Jewish doctor and children’s author that helped run an orphanage for Jewish children, and ended up perishing along with them when they were taken to a concentration camp. In Gletizman’s book there’s a friendly Jewish dentist, who hides children in his basement and tends to the teeth of Nazi soldiers.

As an older reader you experience the horrors of war creeping into Felix’s reality slowly, bit by bit and with a gut-churning inevitability that you wish you could stop… It’s utterly horrendous. But the Holocaust is something that should always be remembered and taught to younger generations, and Gleitzman’s ‘Once’ series is incredibly accessible for young readers (10+), while never once refraining from the impacts of death or the gravitas of war and genocide.

First two books, ‘Once’ and ‘Then’, are set in Europe and concentrate on Felix and Zelda’s time hiding from the Nazis. ‘Now’ leaps ahead to Victoria, Australia in February 2009, and introduces us to a different Zelda… Felix’s granddaughter, named for his old friend.

February 7th 2009 is a date synonymous with death and destruction – the setting of the Black Saturday bushfires that claimed 173 lives.

When we meet her, Zelda is staying with her grandfather while her doctor parents are overseas on a mission. She is struggling to fit in the small country town, and struggling even more with the weight of her name. She has heard stories about Zelda, her grandfather’s brave friend who died during the war… she has always felt like she will never live up to her grandfather’s memory of the dead girl, or be as heroic as young Zelda was.

I turn back to the car. Felix is sitting there. I've never seen him look so miserable.
I get back in the car.
‘I’m not her,’ I say.
We sit looking at each other and I can see Felix is having a really big struggle deciding what to do.
‘Poor Zelda was killed,’ I say. ‘But that doesn’t mean I will be.’
Felix looks at me some more.
He looks at the bus.
He opens his mouth to say something, but before he can the bus drives away.
‘Anyway,’ I say. ‘There’s too much leaving in our family and not enough staying.’


When the day heats up and black clouds loom, Zelda and her grandfather find themselves in a fight for their lives.

I did read the ‘Once’ trilogy thinking it would not finish with ‘Now’. In the third book Zelda learns a few more stories of her grandfather’s time during the Holocaust, one of them being how he joined the Russian resistance in 1944 with his friend, Gabriek… So I was not surprised to learn of ‘After’, a fourth book to be released in 2012.

The ‘Once’ series is truly amazing and heartbreaking. Morris Gleitzman is writing about a horrific moment in human history – but it is vital that new generations know about this past, so that it may never happen again. The ‘Once’ books bring the Holocaust to terrifying life, as told through the eyes of young Felix and later realized by his granddaughter, Zelda. These books are vital reading, and I cannot recommend them enough. 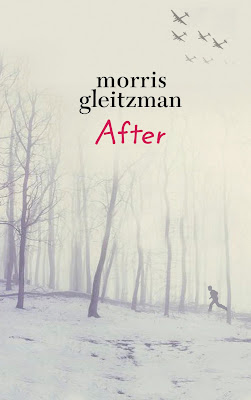 Email ThisBlogThis!Share to TwitterShare to FacebookShare to Pinterest
Labels: Australian YA, Morris Gleitzman, Once, YA