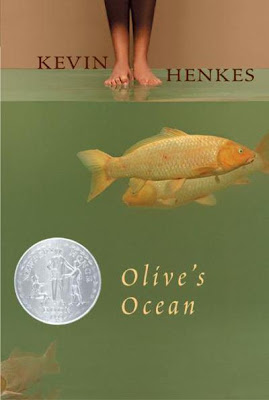 Sometimes life can change in an instant

Martha Boyle and Olive Barstow could have been friends, but they weren't. Weeks after a tragic accident, all that is left are eerie connections between the two girls, former classmates who both kept the same secret without knowing it. Now, even while on vacation at the ocean, Martha can't stop thinking about Olive. Things only get more complicated when Martha begins to like Jimmy Manning, a neighbor boy she used to despise. What is going on? Can life for Martha be the same ever again?

Olive Barstow died before anyone could really get to know her. She was the shy new girl who had only been in Martha’s class for a month before a tragic accident took her life. Her death was a shock and terribly sad, but it’s not like Martha really knew the girl . . .  at least, that’s what she thought. But right before Martha and her family leave for their annual holiday at her grandmother ‘Godbee’s’ house by the ocean, Olive’s mother pays Martha a visit. She has a note for Martha, a note that Olive wrote, about her hopes and dreams for the coming year; and it turned out that one of the things she most wanted, was to be friends with Martha.

I’m still on my Newberry/Printz book kick, and still on a winning streak with Henkes’s deceptively deep, ‘Olive’s Ocean’. The book is ultimately about death, and the moment in a young person’s life when they come to realize their own mortality and fleetingness. Martha Boyle is about to go to her Godbee’s house by the ocean, a trip she looks forward to every year, but she is waylaid by the appearance of Olive Barstow’s mother; who appears on Martha’s doorstep a month or so after the death of her daughter who was hit by a truck while riding her bike. Olive’s mother just wants Martha to know that her daughter had hopes of a friendship with her, that along with dipping her toes in the very ocean Martha is about to go visit, she most wanted to be friends with her because she seemed nice . . .  thus, Martha leaves on her family vacation with Olive’s note in her pocket, and her thoughts keep retuning to the dead girl.

Martha spends a good deal of her holiday thinking about the many small coincidences and links between herself and Olive, and she inevitably thinks about how Olive is no longer here to live out all those dreams she put into a note. Also turning Martha’s thoughts to life’s passing is her grandmother, ‘Godbeee’. Godbee is getting on in years, and she speaks cryptically about maybe not being around forever. Godbee devises a plan over a game of Parcheesi to get to know her granddaughter a little better, and impart some wisdom before it’s too late;

"I have an idea," Godbee said suddenly. "You have to tell me something about yourself each day you're here. Something I don't know." She paused. "And, to make it fair," she added, "I'll do the same for you. What do you say?"
"I guess." How could she disappoint her favourite grandmother?
"Good," said Godbee. "Who knows, this might be our last summer together." And then her eyes strayed and fluttered shut, and she tilted her head to take full advantage of the sun.


While the theme and touched-upon subject of death may seem a deep and dark one, I feel the need to stress that ‘Olive’s Ocean’ isn’t all doom and gloom. Martha is a twelve-year-old girl who is really only just starting to grapple with the concept of death, prompted by her classmate’s sudden tragic death and her grandmother’s obvious aging. Henkes does a truly marvellous job of counter-balancing all the talk of dying and mortality by also including all the typical things that matter to twelve-year-old girls.

There’s Martha’s rambunctious family; her one-year-older brother, Vince, whom Martha is in a constant tug-of-war, love/hate battle with. Her toddler sister, Lucy, who likes to give “good one” kisses. And then there’s Martha’s parents – her radio-host mother who mortifies Martha on a daily basis in her drive-time program. And Martha’s father; a lawyer turned stay-at-home dad who is starting to feel the strain of babysitting Lucy day in, day out with little else to occupy his mind (not even the novel he’s attempting to write). Henkes does a phenomenal job of writing a very tight-knit and complex Boyle family unit; imbuing the story with little familial struggles and side-stories. I loved reading about her father’s boiling over temper, about to flare at any moment under the strain of banana baby food and too little sleep. I also really loved Martha’s talks with her grandmother – especially one in which they both lament Godbee’s aging, crab-like hands which were once so beautiful a boy asked to draw them. . .

The other distractions in Martha’s holiday are the Manning brothers. Five brothers who live down the beach from Godbee’s house, and who Vince always falls into easy friendship with, while Martha has gone through summers of loathing and tolerating the pack of brothers. Except this year Martha is paying attention to oldest Manning brother, fourteen-year-old Jimmy (which has her unknowingly putting a dampener on Tate Manning, the brother closest to Martha in age).

And then there’s the fact that this summer, Martha has decided what she wants to do with her life – be a writer. She wants to write novels, and she’s starting her first one this summer – about a girl called Olive who escapes to the ocean. . .

I loved ‘Olive’s Ocean’. It’s a powerful young adult novel, delving into a young girl’s first confrontations of death and dying while life and love move all around her at the holiday house she visits every year with her family and which, she’s coming to realize, may not ever be the same without her grandmother. Kevin Henkes’s Newberry-winning novel is smart and thoughtful, a serious look at the frail fleetingness of life, but still including a story about a twelve-year-old girl’s first kiss. Loved it!