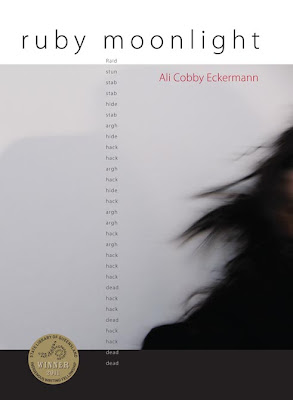 In the mid-north of South Australia, on Ngadjuri land, a young Aboriginal woman survives the massacre of her entire family. Alone and grieving, her fear of discovery is overcome by the need for human contact. . .

Told through a series of interconnected poems, ‘Ruby Moonlight’ elegantly weaves a story that captures the essence of the natural world, colonialism in late nineteenth century Australia and the emotional turmoil borne out of love and human desire.

A few weeks ago I read a fantastic modern poetry collection, and vowed to seek out more prose in my reading life. Lo and behold, Ali Cobby Eckermann’s latest book, ‘Ruby Moonlight’, landed in my hands, and continues to feed my craving for beautifully sorrowful lyricism. . .

‘Ruby Moonlight’ has power from the dedication to the very end. Eckermann has dedicated her book thus;

for my Kami
who disappeared in 1976

for all our mob who died
innocent


When the dedication alone was so commanding, I just knew that what was to come would be something special . . .  and in the case of ‘Ruby Moonlight’, I wasn’t wrong.

A young Aboriginal woman named Ruby survives a massacre – a morning ambush, “the clan slaughtered” and only Ruby is left. She wanders the South Australian landscape, on Ngadjuri land – “she staggers to follow bird song” and trusts in nature to guide her to safety. Ruby is “of the Shadow tribe”, a tribe that is now lost. She is alone.

Eventually, Ruby meets an Irishman trapper called Jack. She finds solace in human contact with this seemingly kind man who offers her food and fire . . . and, for a little while at least, Ruby knows some semblance of peace;


it is the oasis of isolation
that tolerates this union

neither know
the other’s language

they never speak
during the day

only at night
where no-one can hear

he whispers his endearment
ruby moonlight

she is a gem glistening
in a night’s blackness


I have never had quite so much satisfaction in reading a complete poetry book, as I did with ‘Ruby Moonlight’. Although filled with pretty/painful prose and cascading words, ‘Ruby Moonlight’ is also telling a sad story. We follow Ruby from massacre to Jack’s embrace, to a world unlike any she has ever known, and a man “with no music in his heart”. This is Ruby’s story; in all its tragedy. Unfortunately, it’s also the story of many Aboriginals who bore the brutality of colonisation in the 1800’s, and the continued ramifications.

Ali Cobby Eckermann’s ‘Ruby Moonlight’ is heart-wrenchingly beautiful. It is a book of death and violence, loneliness and isolation. But, it’s also a book that glories in nature and, and carries a young woman’s strength while telling of Australia’s dark and brutal past. Equal parts fanciful and factual; ‘Ruby Moonlight’ was powerful from dedication to final line.