'The Age of Miracles' by Karen Thompson Walker 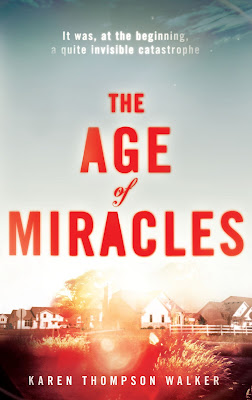 'It is never what you worry over that comes to pass in the end. The real catastrophes are always different - unimagined, unprepared for, unknown…'


What if our 24-hour day grew longer, first in minutes, then in hours, until day becomes night and night becomes day? What effect would this slowing have on the world? On the birds in the sky, the whales in the sea, the astronauts in space, and on an eleven-year-old girl, grappling with emotional changes in her own life..?

One morning, Julia and her parents wake up in their suburban home in California to discover, along with the rest of the world, that the rotation of the earth is noticeably slowing. The enormity of this is almost beyond comprehension. And yet, even if the world is, in fact, coming to an end, as some assert, day-to-day life must go on. Julia, facing the loneliness and despair of an awkward adolescence, witnesses the impact of this phenomenon on the world, on the community, on her family and on herself.


It starts with an hour. One simple hour gained, and the world irrevocably altered.


In her sleepy California cul-de-sac, Julia and her family tune in with the rest of the world as a scientist explains that the earth’s rotation has slowed, and we have gained an hour.


The change is really, barely perceptible. There are several more minutes of sunlight and darkness each day. Maybe balls fall a little harder when dropped? But otherwise, there are more catastrophes in people’s reactions than the change itself.


And then our 25-hour day increases to a 26-hour day. We have gained more time, and they call it ‘the slowing’.


Eleven-year-old Julia watches the changes around her. Her mother, a failed actress, takes the news with her marked outlandishness, immediately stock-piling for doomsday. Her father meanwhile, a doctor, is the calming force in their family and he continues with his routine. But Julia’s Mormon best friend, Hanna, escapes to Utah with the rest of her family and congregation, to wait out what’s to come. Many other students stop attending school – families scatter, preparing for the worst. And, ever so rapidly, the worst comes.


First, the birds die. They fall from the sky and no one knows why. Insects thrive without their natural predators. The world steadily slows and gains more hours. Crops start dying. There are 50-hours of sunlight. Magnetic fields are off-kilter, changing tides and beaching whales en masse. Sunlight radiation becomes a very real threat.


Government’s around the world implement the 24-hour day, in a bid to stabilize the economy. Those, like Julia’s family, who wish to follow the old, antiquated clock are called ‘clock-timers’ and find themselves waking in the night and sleeping during the day.  The rare ‘real-timers’ try to adapt their human circadian rhythms; sleeping for twenty-four hours in the night and barrelling through the day – they are shunned by society for not following governmental norms.


All the while Julia watches the town and people around her as they change. The boy she has liked for so long, Seth Moreno, already touched by tragedy since losing his mother to cancer, becomes a mysterious obsession for Julia. She observes the ‘real-timer’ across the street from her, Sylvia who used to teach her piano. And Julia observes her parents – her mother’s increased paranoia, her father’s stoic acceptance . . .  and she watches how they grow further and further apart. Meanwhile, Julia too separates herself from everyone around her – finding herself a social loner cast adrift in these times of change, this age of miracles.


‘The Age of Miracles’ is the much-anticipated debut novel from Karen Thompson Walker.


I have had my eye on this book since reading the rumblings of a huge bidding-war for the manuscript. It seems that Thompson Walker is a bit of a literary Nostradamus, her book predicting (in a very small way) the shortening of our day by the fraction of a second after the Japanese earthquake and consequent tsunami. The earthquake knocked the world off its axis, but this was a very small, true happening compared to the disastrous going’s on in ‘The Age of Miracles’. Regardless, in a time when earthquakes, tsunamis, bushfires and general climate change fears are running rampant – Karen Thompson Walker wondrously taps into our deep fears and expounds on the possibility of “what if?”


The book is narrated by eleven-year-old Julia, looking back on the events that defined her childhood, and changed the world.

There was no footage to show on television, no burning buildings or broken bridges, no twisted metal or scorched earth, no houses sliding off slabs. No one was wounded. No one was dead. It was, at the beginning, a quite invisible catastrophe.

We follow Julia’s recollections from the moment of announcement, to the birds dying and whales beaching, all the while she remembers the reactions and fall-outs from those around her with the meticulous detail of someone who cannot forget the events that defined her, and continue to impact on the world.

We were living under a new gravity, too subtle for our minds to register, but our bodies were already subject to its sway. In the weeks that followed, as the days continued to expand, I would find it harder and harder to kick a soccer ball across a field. Quarterbacks found that footballs didn’t fly as far as they used to. Home-run hitters slipped into slumps. Pilots would have to retrain themselves to fly. Every falling thing fell faster to the ground.

Suddenly Julia’s childhood becomes history sooner than she ever thought it would. L. P. Hartley wrote, "The past is a foreign country: they do things differently there"– for Julia and her generation, this rings alarmingly, brutally true. Birdsong becomes a distant memory. Julia presses flowers in dictionaries with the thought to preserve a little something of now. What once was commonplace becomes archaic and irrelevant, and we read as Julia and those around her struggle to follow this new world order;

How quaint the old twenty-four-hour clock began to look to our eyes, how impossibly clean-cut, with its twin sets of twelve, as neat as walnut shells. How had we believed, we wondered, in such simplistic things?

Karen Thompson Walker has most certainly written a horrifying disaster novel, made all the more frightening for the way that she makes it so very, very plausible. Her succession of events following the fall-out of gained hours has clearly been well-researched, and throughout my reading I was amazed at the little changes that I'd never even considered when first presented with the idea of more hours in the day. A little thing like birds dying (nobody knows why, but theories abound from altered eating habits causing starvation, to warped migrations) creates a domino-effect in the world. No birds means more insects. More insects affect already-failing crops. Crops failing mean greenhouses being built and growing by artificial light. More greenhouses and artificial light sources put a strain on electrical grids. And so on and so forth; a tumbling effect of one minor disaster after another. All caused by a slowing earth, gaining hours. Incredible.


The triggering disaster in ‘The Age of Miracles’ is, to be sure, a terrifying one when written with  Thompson Walker’s entirely convincing pen. But what’s equally fascinating about this book is the observations of human interaction in the wake of the disaster. Julia has a keen eye that she trains on those around her, and she notes their habits and foibles, especially her parents and her own. A grown Julia, recollecting these events from some distant future, wonders about cause and effect – would her parents have drifted apart, even without the slowing and what followed in the grown days? They are maddening but fascinating questions that  Thompson Walker nuts out – and in a book that so beautifully focuses on an earthly disaster, it’s incredible that the ripples of Julia’s daily life are just as intriguing as the large-scale catastrophes going on in the world around her.


This novel is, simply, stunning. Karen Thompson Walker writes this disaster with a menacing lyricism – deconstructing the domino-effect of the world’s slowed turning through the eyes of an eleven-year-old girl, whose world is thrown off-kilter in more ways than one. No wonder ‘The Age of Miracles’ triggered a bidding war – this is one of the must-read books of 2012, equal parts exquisite and terrifying.