'After' Once series #4 by Morris Gleitzman 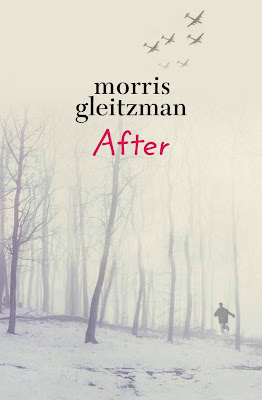 In the fourth part of Felix's story, continuing his adventures in World War Two, he faces perhaps his greatest challenge - to find hope when he's lost almost everything, including his parents. As Europe goes through the final agonizing stages of the war, Felix struggles to reconcile hatred and healing. He's helped by a new friend, but if he should lose her as well ...


Felix has been hiding in a hole. He prays to storybook hero, Richmal Crompton, that the Nazis do not find him and that the war may be over soon. Felix has already lost so much to this war and Hitler – his parents died in a death camp, simply for being Jews. And two years ago his dear friend, Zelda, and their protector, Genia were hanged by the Nazis. Now it’s just Felix and Genia’s husband, Gabriek, left on the farm, along with trusty working horse, Dom.

But when people emerge from the forest, people with guns who claim they are not Nazis, Felix’s world is turned upside down yet again.

He and Gabriek are thrown into the middle of the Partisan war – a group of guerrilla fighters hiding in the Polish forests, who are doing everything they can to stop the Nazis – by stealing their guns, and blowing up their trains . . . and they want Gabriek and Felix to help them.

‘After’ is the fourth book in what was originally Morris Gleitzman’s ‘Once’ trilogy.

The first three books in Morris Gleitzman’s ‘Once’ series are vital reading. I cannot recommend them enough – and I made it a particular point to persuade my cousin, a primary school teacher, to read them to her Year 6 class. I told her that the books are actually intended for ages 9+, and that Gleitzman has a lovely sense of humour to balance out the darker themes . . . but it’s those dark themes that do in fact make this series so very vital.

With the ‘Once’ series, Morris Gleitzman has said: “This story is my imagination trying to grasp the unimaginable.” By that he of course means WWII, and in particular the events surrounding the Holocaust and genocide of roughly six million Jews.

Gleitzman’s subject matter is heartrending, but it’s a story that should always, at some point, be told and explained to younger generations . . . and I don’t think there is a better way to help young children understand the gravity of such unimaginable events, than by introducing them to Morris Gleitzman’s epic ‘Once’ series. Particularly now that there is a fourth book with ‘After’, and this truly feels like a series that has come full-circle, and took a long, rough road to get there.

‘After’ slots in between books two and three, ‘Then’ and ‘Now’. In ‘Then’, Felix and his young friend Zelda were still on the run, hiding from Nazis and getting help from farmer, Genia. That second book finished on a note of utter heartbreak, and in book three ‘Now’, Gleitzman skipped ahead to Victoria, Australia in February 2009 and the Black Saturday Bushfires. In ‘Now’, Felix is an old man and looking after his granddaughter, Zelda, when the bushfires strike and they are forced to take shelter, just as Felix remembers he did as a young boy hiding from the Nazis . . .

‘Now’ did seem to be the final book of the series for Gleitzman. But it didn’t feel like the end, not really. It was a comfort to read ‘Now’ after the harrowing events of ‘Then’ – it was sweet relief to know that Felix grew old, that he’d become a doctor after the war and dedicated his life to helping people. It was bittersweet to learn that he’d named his granddaughter for his own personal hero, Zelda. But Felix made mention throughout ‘Now’, to events that happened in 1944, when he was part of the Polish Home Army, hiding in the forest and helping to blow up Nazi trains. That was a tale too good to let lie, and I was thrilled to learn that Gleitzman extended his trilogy to include ‘After’.

In this fourth book, Gleitzman delves into the resistance/partisan war effort carried out by the Polish people. Felix and Gabriek meet some nice partisans hiding in the forest, like Doctor Zajak, who wants Felix as his medical apprentice. There’s also Yuli, a Russian woman who escaped from a Nazi work camp and is fierce in her fight against their injustice. Not all the partisans are nice, however, and most of them have the same intolerance for Jews as the Nazis do.

Gleitzman has clearly done a lot of research into the war resistance movements going on across Europe during this time, and he weaves a lot of crucial information expertly into Felix’s story. And it’s during his time with the resistance movement that Felix starts asking some big questions of himself – when he has life and death in his hands, when he is witness to more killing and more violence.

I wish Gabriek had some weapons to help him escape. But he’s not interested in weapons. He’s only interested in mending things. He’s a genius at that. Machinery, animal equipment, electrical objects, anything except weapons.
If my best friend Zelda had met him, she’d have called him a mending person. Zelda was only six but she had the loving heart of a ten-year-old and she knew when a person was good.
That’s another reason Gabriek has to be kept safe. The world needs all the mending people it can get at the moment. There are too many people around who just break things.


I loved that in this book, Felix saw violence being performed by more than just the Nazis. He really sees what human beings are capable of doing to one another during desperate times, and it’s very telling that he often comes to the conclusion that fighting fire with fire just makes more violence, and an eye for an eye makes the whole world blind. In this book it’s quite easy to see how the Felix of ‘Once’ went on to become a doctor, and kind old man in ‘Now’.

Be prepared. Morris Gleitzman holds nothing back in ‘After’, as well he shouldn’t if these books are going to inform an entire generation of younger readers about the true horrors of the war. You will cry, but you will also feel that spark of indignation and hopelessness that comes when you look back on the events of WWII and comprehend just how awful human beings can be to one another.

I loved Morris Gleitzman’s initial ‘Once’ trilogy, and I was so thrilled to learn that he had a fourth book planned, to properly conclude the series and brave Felix’s journey. ‘After’ was everything I hoped it would be. Morris Gleitzman’s series is a hallmark of Australian young adult literature, and I maintain that it is vital reading for young children. Yes, the story is sad and violent, but that is unfortunately the very true human history that Gleitzman is exploring. Take comfort in the knowledge that Felix is a wonderful narrator on this harrowing journey. He is the best kind of young protagonist; for he sees the wrongs and atrocities being carried out around him, and he vows to be better and do better, and I feel better for having read his story.

UK covers
Posted by Danielle at 12:00 AM

Email ThisBlogThis!Share to TwitterShare to FacebookShare to Pinterest
Labels: Australian YA, Morris Gleitzman, Once, Publisher Review, YA