'Fire in the Sea' by Myke Bartlett 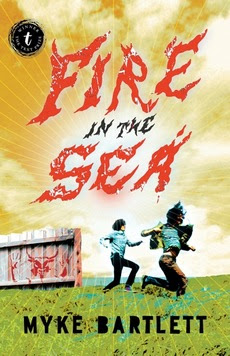 Sadie is sixteen and bored with life in Perth. It’s summer, and lazing on the beach in the stifling heat with her cousins and Tom is a drag. Then something comes out of the sea.

Dark menacing forms attack an old man, leaving him for dead and Sadie wracking her brains to understand what she saw. Then there’s a mysterious inheritance, a strange young man called Jake and a horned beast trampling the back yard.

Sadie finds herself caught in the middle of an ancient conflict that is nearing its final battle, a showdown that threatens to engulf Perth and all those she loves in a furious tsunami.

Fire in the Sea is a fast-paced thrilling adventure with a feisty heroine who is not afraid to fight for what she knows is right.

Sadie Miller needs to get out of Perth. This town is too small to hold her, and has too many bad memories that keep a hold of her. Like the memory of her parents’ death, and every one of her sixteen years that should have been shared with them. Instead, Sadie lives with her grandparents and keeps to her close-knit bubble of friends, including her two cousins Heather and Kimberley, and her best friend (who wants to be more), Tom.

But just as Sadie starts fiercely wishing for anything to change, everything does . . .

At Cottesloe beach one night, Sadie and Tom watch an old man be set-upon by two masked thugs, and Sadie steps in to help. The attackers disappear into the water, and the beaten man tells Sadie to beware of “men with wet shoes.”

But the strangeness is only just beginning. It seems that the old man, a one Mr. Freeman, signed the entirety of his will and estate over to Sadie while on his deathbed – she now owns an old Gothic house and everything in it, and is tasked with taking care of the premises, including a vicious guard-dog called Kingsley.

One night, in the process of guarding Mr. Freeman’s house (now hers) Sadie finds herself pinned by a shirtless, posh, sword-wielding boy demanding to know the whereabouts of the ‘relic’. Even stranger than finding this shirtless, posh, sword-wielding boy in Freeman’s abandoned house, is discovering that the same boy claims to be Mr. Freeman – Jacob ‘Jake’ Freeman. One in the same. Reincarnated. Like the Dalai Lama.

Sadie wouldn’t believe all this rubbish, normally . . . but stranger things keep happening. Like Tom having a close-encounter with a horned man. Or a siren song that keeps calling from the sea, or the appearance of those men with wet feet that Mr. Freeman warned Sadie about.

This really is just the beginning. And if Sadie doesn’t help the reincarnated Jake Freeman find his ‘relic’, an old wooden box worse than Pandora’s, then all hell will break loose . . . literally.

Only one thing is certain – Perth just got a whole lot more interesting for Sadie Miller.

Myke Bartlett’s debut novel, ‘Fire in the Sea’, was the 2011 winner of the Text Prize for Young Adult and Children’s Writing.

I love an Australian young adult paranormal novel that relishes being an Australian young adult paranormal novel. Case and point – Myke Bartlett’s incredibly compelling ‘Fire in the Sea’. This novel marks the first Aussie paranormal I've read that is set in Western Australia, and makes a focal point of the City of Light, Perth. A good portion of the drama and supernatural shenanigans take place at the iconic Cottesloe Beach, with the grandiose Surf Life Saving Club in the background standing watch. It’s clear from the moment that Sadie Miller laments her Perth surroundings (dreaming of a move to Oxford or Melbourne) that Bartlett is himself well-acquainted with the teenage pastime of wishing to be ‘anywhere but here’. Sadie knocks around the beach with her friends, and rides her bike through suburban neighbourhoods, but is thoroughly sick of it all. Not only does this small town hold vastly painful memories of her dead parents, but the fact of the matter is: nothing happens . . . until a beaten old man leaves Sadie with everything, almost more than she can handle.

Bartlett’s particular brand of supernatural is more like a patchwork of monsters, myths and imagination. I don’t think I’ll be spoiling anything if I say that he covers a broad spectrum of paranormal from the Minotaur to sea sirens, while providing a harrowing explanation for Pompeii’s eruption and an even more chilling mystery surrounding a famous long-lost city. It’s a most peculiar mix of myth and mayhem that works brilliantly when woven by Bartlett. But what really saves ‘Fire in the Sea’ from just being a hodge-podge of fantasy is its young protagonist, Sadie Miller.

We are with Sadie every step of the way – from Mr. Freeman’s attack to his seeming reincarnation to a particularly handsome young man. She is as cast adrift in the supernatural sea as readers, but her particular brand of brittle, sarcastic loyalty makes navigating Bartlett’s mythical waters so very easy (and downright enjoyable);

Jake lifted the talisman from the front of his shirt. ‘This marks me as a servant of the Gods. As long as I wear it, I’ll always come back.’
‘Good for you. So you don’t die. You don’t get old.’ Sadie looked down at the dog by his feet, the dog with the same name as countless dogs before him. She saw herself, staring at a dog, standing on grass she’d played on as a child. ‘No. Seriously, what is wrong with me? Demons, Gods. A magic box. I mean, I've never ever read Lord of the Rings. I hate all that stuff.’


I loved Sadie. She’s just the sort of young heroine I love to read – she spends a good portion of the novel being scared witless, but never lets her fear get in the way of saving her friends or doing what’s right. She's quick-thinking and fierce, and just the sort of friend I'd like to have in my corner (should a Minotaur ever attack). But she’s also thoroughly relatable – combating Perth-fatigue, a best friend who wants to be more and trying not to succumb to the grief that constantly pulls at her.

I really shouldn’t be so surprised that another Text Prize novel is incredible, but I am. ‘Fire in the Sea’ is a fantastic new addition to the Aussie young adult paranormal scene – set in the beautiful (if lamentably dull) city of Perth, and featuring everything from sea sirens to crazy reincarnated boys. Myke Bartlett has written a parade of paranormal creatures and a thrilling sea-depths mystery . . . I, for one, hope that this is just the first of many more novels from an interesting new Aussie YA voice.