'Not Quite a Husband' by Sherry Thomas 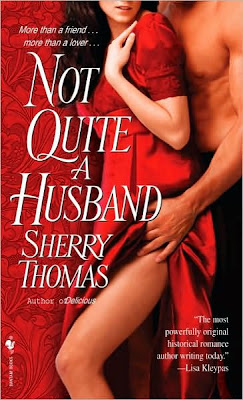 Their marriage lasted only slightly longer than the honeymoon—to no one’s surprise, not even Bryony Asquith's. A man as talented, handsome, and sought after by society as Leo Marsden couldn't possibly want to spend his entire life with a woman who rebelled against propriety by becoming a doctor. Why, then, three years after their annulment and half a world away, does he track her down at her clinic in the remotest corner of India?

Leo has no reason to think Bryony could ever forgive him for the way he treated her, but he won't rest until he’s delivered an urgent message from her sister—and fulfilled his duty by escorting her safely back to England. But as they risk their lives for each other on the journey home, will the biggest danger be the treacherous war around them—or their rekindling passion?

Bryony Asquith tried for happiness three years ago, and it failed miserably. Not only a spinster, Byrony was also a female doctor and disgrace to her illustrious family. Regardless of her unappealing profession and over-the-hill age, she took a chance and proposed to Leo Marsden, the fifth son of an Earl and her old childhood neighbour from the Cotswolds. No one was more surprised than Byrony when Leo accepted, but it didn’t take long before the prediction of London high society proved true and the marriage ended in disaster and annulment. . . and Byrony has a constant reminder of her failure in a white streak of hair, the last sign she needed that it was time to cut and run from her husband.

Three years later, in the North-West Frontier of India, Bryony Asquith is in her third year of running from the memory of her disastrous marriage. She has been to Germany and America, and now finds herself doctoring in the Rumbur Valley. So she is beyond shocked to hear Leo’s voice one day, and even more shocked to learn that he has hunted her down upon order of her young half-sister, to drag Byrony home and to the bed-side of their ailing father.

Will a trip through India, during the dangerous Pathan Revolt, bring Byrony and Leo closer together? Or will laying all her secrets bare shatter an already broken relationship beyond repair?

‘Not Quite a Husband’ was the 2009 stand-alone historical romance novel from Sherry Thomas.

Where the heck have I been? Seriously! ‘Not Quite a Husband’ is the first Sherry Thomas book I have ever read – and I am so annoyed at myself that I didn’t rectify that situation sooner! Thomas is quite a romance heavy-weight, having previously won the ‘Publisher’s Weekly Best of the Year Book’, and with ‘Not Quite a Husband’ she was the 2010 RITA Award recipient for Best Historical Romance. I have heard her name bandied about before, and someone at some point has recommended her books to me. I just can’t believe it has taken me this long to finally pick her up, because after ‘Not Quite a Husband’ I think I have discovered a favourite new romance author!

It always bothers me that historical romance novels are regarded as amongst the lowly literary genres. True, sometimes the bodice-ripper front covers don’t help the cause, but for the most part it’s frustrating when so many wonderful authors and their fantastic writing are overlooked and sneered at for being none other than ‘romance’. That’s how I feel about ‘Not Quite a Husband’ – the ravishing red cover, showing a lot of thigh, really doesn’t communicate the depth within.

We meet Byrony Asquith in India; her third continent in three years, since the end of her marriage. A travelling doctor, who used her skills as a convenient excuse to get away from prying, gossiping London society, Byrony is stupefied when her ex-husband Leo Marsden appears one day, and announces his intentions to escort her safely home to her father’s bedside. She reluctantly accepts, and their trek through India sees them caught in the middle of the Swat Valley Uprising of 1897.

Byrony and Leo have a complicated past. They were neighbours during their childhood in the Cotswolds, and Leo loved the older Byrony from afar – a serious and solemn young girl who had already lived through the death of her mother and step-mother by the time she was eight, abandonment by her father left her a lonesome teenager. Four years her junior, Leo was captivated by her, and delighted when they reconnected in London in their 20’s – he, a renowned mathematician and sought-after dinner companion, and she a much gossiped about female physician. Leo was especially delighted and surprised when Byrony proposed to him soon after their reconnection, and they enjoyed a wonderful engagement. But not long after they took their vows, their marriage began to deteriorate. Whereas Leo went in with a full heart and heady optimism, Byrony turned from him and eventually barred him from their marital bed. Annulment shortly followed.

During their trek through India, we are given insight into both Leo and Byrony’s memories of their marriage . . . and it’s most curious to read how very differently they view the deteriorating year. Byrony reminisces about her embarrassing infatuation with Leo – her prideful feelings towards such a handsome, popular husband which eventually turned bitter and embarrassed. Leo, meanwhile, remembers his infatuation as a young lad and his being blind-sided by her sudden turning away from him;

“What’s the matter?” she asked, her tone subdued.
“Nothing,” he said softly. “I forgot that you could make me laugh, that’s all.”
Her reaction was a slow, downward sweep of her lashes. When she raised her eyes again, her face had assumed a plasterlike smoothness.
The Castle. He’d seen this expression far too many times during their marriage. The Castle was Byrony drawing up the gates and retreating deep into the inner keep. And he’d always hated it. Marriage meant that you shared your goddam castle. You didn’t leave your poor knight of a husband circling the walls trying to find a way in.


As their trek continues, Leo and readers slowly become privy to the event which ultimately undid the marriage for Byrony . . . and it’s a hurt that even three years of running has not managed to heal;

Her heart was made of glass: It could break, but it could not expand.


I loved the point at which Sherry Thomas wrote Leo and Bryony’s rekindling. Really, this book could have quite plausibly began with Byrony’s proposing to Leo, or it could have followed them through their first disastrous year of marriage . . . but I love that Thomas throws these two damaged, wounded people into the wilds of India during anti-colonialism uprisings. Fear of death crystallizes their feelings for one another – and prompts an outpouring of truths and hidden hurts. Everything is ramped-up, every emotion all the more powerful for Thomas having set ‘Not Quite a Husband’ during turbulent times, and concentrated on the even more turbulent falling-apart marriage.

I also loved Leo and Byrony’s pasts. They are both very complicated people, Byrony in particular. She had already experienced so much death at such a young age, and that really shaped her into the woman she became . . . an introverted, brittle woman who didn’t trust in love. Leo, on the other hand, had loved Byrony from afar for such a long time (without her knowledge) that when their marriage crumpled he had to deal with the crushing blow of all his highest hopes being dashed.

As much as I loved Byrony and Leo’s unusual love story, I especially loved all the tid-bits of information Thomas throws in about the Swat Valley uprising. She goes into fantastic detail on her website about the India setting and colonialism underpinnings.

‘Not Quite a Husband’ is one of the best historical romance novels I have read in a long time. I am ashamed to say that it was the first Sherry Thomas novel I read, but I vow that it won’t be my last!