'Shadows' The Rephaim #1 by Paula Weston 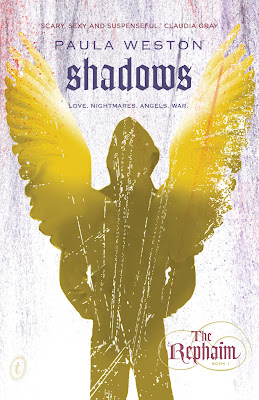 It’s been almost a year since Gaby Winters was in the car crash that killed her twin brother, Jude. Her body has healed in the sunshine of Pandanus Beach, but her grief is raw and constant.

It doesn’t help that every night in her dreams she kills demons and other hell-spawn. And then Rafa comes to town. Not only does he look exactly like the guy who’s been appearing in Gaby’s dreams, he claims a history with her brother that makes no sense.

Gaby is forced to accept that what she thought she knew about herself and her life is only a shadow of the truth—and that the truth is more likely to be found in the shadows of her nightmares.

Who is Rafa? Who are the Rephaim? And most importantly—who can she trust?

Gaby Winters is hiding; hiding from her grief and anger, her parents, her life and from missing her dead brother, Jude. And as far as hideouts go, Pan Beach is a pretty nice one. Even better is that within a few days of arriving at this seaside town, Gaby met and befriended Maggie, a local beauty still reeling from her own loss and looking for a roomie. And working at the local library isn’t such a bad way to keep productive and avoid constantly thinking on the car crash that killed Jude, and left her with permanent scars.

But Gaby’s grief is constant, and even after months in Pan Beach, Jude’s absence still keeps dragging her under. So Gaby starts writing about her dreams, and posts stories of them on a fiction-sharing website. Dreams about a beautiful sword-wielding, green-eyed boy and slobbering, hellish creatures that need beheading. Fantastical dark dreams, a literary glimpse into Gaby’s aching heart.

And then Gaby meets Rafa.

One night at the local bar Gaby spots him looking at her – and she can hardly believe it. He’s the boy, the beautiful sword-wielding, green-eyed boy from her dreams. He’s real, and within a few minutes of talking to him it becomes clear that he has been appearing in Gaby’s subconscious because she and Jude have met him before . . . except Gaby has no memory of him.
According to Rafa, he and Jude were best friends. He has holiday photos to prove it. And, according to Rafa, he and Gaby have never gotten along – in fact, the last time they spoke she gave him a broken nose. But Gaby has absolutely no recollection of this – much to Rafa’s anger. She leaves him, unamused by his cryptic talk and insistence on calling her ‘Gabriella’. But she can’t forget about him – his green eyes, nor the fact that he stopped out of her dreams and into reality.

As Maggie finds herself falling for a tourist called Jason, Gaby is in a similar situation with Rafa. Despite his infuriating suggestions that she is faking her memory loss, not to mention his enviable past friendship with Jude, Gaby is intrigued by him, and maybe even a little bit smitten . . .

And then she is attacked. A group of teenagers, no older than her, descend on her in a park late one night. And, like Rafa, they accuse Gaby of faking her memory loss – and demand that she start acting like herself, like Gabriella. This band of beautiful thugs even expect her to fight them (as though she could?) and when she doesn’t, she is thrown bodily and beaten bloody.

Rafa is there to help her recover – in the most inexplicable, incredible way. And so the truth slowly starts leaking out . . . Gaby’s past and her memories are not her own. She and Jude were in fact Rephaim – bastard children of fallen angels, fallen angels who centuries ago broke out of hell and are still on the run. It is the Rephaim’s task to find their fathers and bring them to justice – though Jude and Gaby found themselves of differing opinions regarding what to do with their fallen fathers once they were found.

Gaby’s memories are not her own, she is not even human. But she cannot remember her past as the Rephaim ‘Gabriella’, or what happened to Jude except that he is dead. Which begs the question – who (or what?) would take Gaby’s memories, kill Jude and try to assassinate her?

‘Shadows’ is the debut book from new Australian YA author, Paula Weston and the first in a new paranormal series called ‘The Rephaim’.

Now, I have read a lot of YA-angel books lately. They are one of many supernatural species in the overcrowded YA-paranormal scene, and I have read some truly brilliant angel books over the years, and some God-awful (pun totally intended) angel books. But I've got to make a big call and say that Paula Weston’s is, in my humble opinion, the best of the angelic bunch.

Told from Gaby Winters’s perspective, the book begins innocuously enough on Pandanus Beach in Queensland, where we meet our heroine whose thoughts are clouded with her dead twin, Jude, and a feeling of unease from the surrounding trees. We learn that Gaby has been living in Pan Beach for a few months, rooming with the beautiful Maggie who recently lost her father to cancer. In a bid to rid herself of dark dreams and a constant sense of dread, Gaby has been posting some of her short stories on a fiction website, a bit of purging literary catharsis. But when the boy from her dreams (and stories) turns up in a local bar, Gaby’s entire world is turned upside-down and inside-out . . .  enter, Rafa.

With the appearance of this smirking, green-eyed boy comes the revelation that Gaby has lost huge chunks of her life since the car accident that also killed Jude – as Rafa explains that he is one of Jude’s oldest friends, and an unhappy acquaintance of Gaby’s. Confused by Rafa’s protestations that Gaby is Gabriella, and somehow ‘pretending’ to forget who she is and the infamous falling out she had with Jude – the situation is further compounded when she is attacked by sword-wielding teenagers who likewise call her Gabriella and expect her to fight back. Lo and behold, it is revealed that Gaby’s memories of an innocuous childhood with Jude, raised by loving if ambitious parents are all false – so too are the memories Gaby clings to of backpacking around the world with her twin before his death. All of them are a lie, presumably planted by whatever or whoever killed Jude, and tried to kill her too. The truth is far more complex, and closer to the stories Gaby has been writing . . . she is one of the Rephaim; progeny of fallen angels, now tasked with hunting those same angels down and returning them to hell.

My head is pounding.
‘What did Jude and I argue over?’
Rafa uses his thumb and forefinger to rub his eyes. ‘Does it matter?’
I wait.
Another sigh. ‘For the moment, let’s just say you, me and Jude, we’re part of a very large and dysfunctional . . .  association. Within our ranks, there’s a difference of opinion about how to tackle a particular problem, and you and Jude chose different sides.’
That makes no sense. ‘And you and me?’
‘Not on the same side. The last time you saw me, you broke my nose.’


Paula Weston beautifully sets Gaby’s story up – leaving cluey breadcrumbs from page one and effectively hooking readers from the get-go. It helps that one of the biggest, tastiest breadcrumbs is bad-boy Rafa – whose appearance is the trigger that starts Gaby off on her quest to discover who she really is.

And Gaby’s true identity is a doozy – she is a Rephaite, offspring of fallen angels. The story, mired in the Hebrew Bible, goes that God’s fallen angels were sent to hell as punishment for their lustful ways: "Destroy all the souls addicted to dalliance, and the offspring of the Watchers...” (Book of Enoch). But centuries ago they escaped from hell and went on a lustful rampage across earth – impregnating thousands of mortal women before going into hiding. The product of those pregnancies were the Rephaim – not to be confused with the Nephilim (bastard children of Fallen Angels), because the Rephaim have dedicated their lives to the ‘Angel Garrison’ and hunting down their fallen fathers, to return them to their punishment. . .

In lots of angel-YA books, I do find that God is taken out of the story; which often makes sense. If you bring religion into anything it tends to confuse everything – and I have often praised angel-themed books for avoiding those murky waters and treating the angel species as just another, malleable supernatural group with their own mythology to be played around with – the same way that not all vampire books hold to the lore’s passed down by Bram Stoker (hello, sparkly Edward!). However, I think Paula Weston tips her hat more to the Biblical underpinnings of her angels, and the book is far more interesting for it.

The big guy (God) is mentioned in passing, and in a most plausible referential way that doesn’t entirely sweep him under the rug. What I’m talking about with relation to Weston’s angels is the rather pious attitudes of the Rephaim as Gaby gets to know a few of them and their cause. Turns out that ‘Gabriella’ and Jude were on different sides of the Rephaim’s hunt for the Fallen Angels – with very different views on how to live as the product of their lustful fathers, and opposing opinions on how to deal with the fallen when (or if) they are found. It’s interesting that a band of these Rephaim have dedicated their long, immortal lives to hunting down their fathers and living ‘pure’ in the meantime. There’s definitely lots of room for future explorations into the repercussions of a life dedicated to virtue, thanks to the sins of their fathers.

Paul Weston’s angelic world is an epic one – taking us from pretty Pan Beach, to picturesque Patmos and the snowy peaks of a Cliffside Italian monastery. The history surrounding her Rephaim is utterly compelling, and filled with enough Biblical-intrigue to warrant quite a hefty series . . . but it’s Weston’s characters that ultimately carry ‘Shadows’, and have me desperate for book number two.

Rafa and Gaby steal the show – or I should say their chemistry steals the show. Their quips and sharp wit come out like claws the moment they cross paths – but their biting repertoire masks a lot of lustful curiosity and delicious possibility. Even though Gaby doesn’t remember Rafa from her past, she’s intrigued by him – and, heck, she has been dreaming about him for months now! Rafa seems equally curious as to why this amnesiac Gaby doesn’t loathe him like the Gabriella he remembers. It’s certainly an interesting romantic conundrum for these two – and Paula Weston plays it beautifully. Even more interesting than Rafa and Gaby’s present-tense flirting is the slowly revealed truth about their past. . .

As much as I loved bad-boy Rafa (LOVED him!) and Gaby together, I also have a lot of praise for Weston’s secondary characters. Ruthless Rephaim like Daniel, Mya and Malachi are a rude-awakening for Gaby concerning her past. While her human friends; Maggie, Jason and Simon are a fantastic counter-balance to the fantastical goings-on in her life. I really look forward in future books, to how Gaby’s past will keep creeping up on her and how she now relates to her old Rephaim friends (more like frenemies?).

I really can’t praise ‘Shadows’ enough. It’s a tough, smart and refreshing new Australian paranormal YA, not to mention it’s the best angel-themed book I have read. I am so excited for book two in ‘The Rephaim’ series, and desperate for more Rafa.