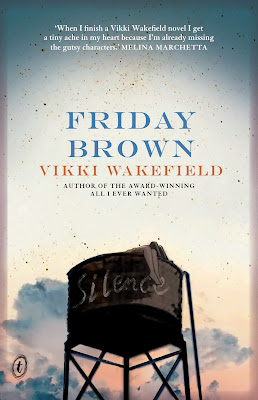 Seventeen-year-old Friday Brown is on the run—running to escape memories of her mother and of the family curse. And of a grandfather who’d like her to stay. She’s lost, alone and afraid.

Silence, a street kid, finds Friday and she joins him in a gang led by beautiful, charismatic Arden. When Silence is involved in a crime, the gang escapes to a ghost town in the outback. In Murungal Creek, the town of never leaving, Friday must face the ghosts of her past. She will learn that sometimes you have to stay to finish what you started—and often, before you can find out who you are, you have to become someone you were never meant to be.

Liliane ‘Friday’ Brown is a wanderer. She and her mother, Vivienne, spent Friday’s formidable years bouncing from one outback town to the next, chasing drover men and trying to escape a watery Saturday curse … Friday has been hearing the tales of her drowned women ancestors since she was a child. Brown women always die by drowning, and always on a Saturday. Saturday is the reason Vivienne nicknamed her daughter Friday, it’s why she kept them wandering around the desert outback, and in the end it killed her anyway.

Now Friday is alone, but she still feels the need to follow in her mother’s wandering footsteps.

Friday packs up her swag and leaves her grandfather’s quiet home, with the concrete pool. She hoofs it into the city, and there feels more lost and alone, never more aware of the hole Vivienne left in her heart.

And then Friday meets Silence. Or, rather, they perform a small miracle together and ignite a fateful friendship that Friday is never likely to forget…

Silence is a street kid. He does not talk much, and upon her pleading he leads Friday to the abandoned house where he and his street ‘family’ live. There’s little boy AiAi who jangles when he walks, for all the bones his old daddy broke. Darcy makes her living from men, and she hates Friday on sight. Joe is a straight-talking wise boy, and Carrie has fangs and a wounded past. Bree is an indigenous girl whose family perform street music, and Mailk is the muscle who sells drugs on the side. And reigning over all these lost boys and girls is Arden, a veritable Peter Pan Amazonian with dreadlocks and a vengeful tattoo.

Friday is reluctantly drawn into their tough and wild life, even though she feels the emptiness in her grow everyday she stays. It’s Silence that keeps her hanging around, Silence and the walls of this abandoned house that he papers with worded shapes. And then it’s Arden, her fiery temperament and rough loyalty.

… And then it’s Wish. An old street kid Arden used to know. His smile reminds Friday, for the first time since her mother died, that people can connect again. Not all who wander are lost.

But when Arden insists on moving her street kin to the outback wild, when she gets it into her head to keep them all isolated in one faraway place, Friday gets the sinking feeling that she and Silence should have left a long time ago …

I read Wakefield’s debut novel last year, and found a new favourite Aussie YA author in the process. Like many others I was eagerly anticipating her second outing, and feeling that sick see-saw feeling, between hoping it will be just as good as her first, but worried lightning won’t strike twice. Well, rest assured, ‘All I Ever Wanted’ was no lightning in a bottle and ‘Friday Brown’ is a glorious thunderstorm after the fact.

This second novel is nothing like Wakefield’s first. Except, perhaps, in their young female protagonists who are a little bit lost, lonely and loyal. We meet Friday Brown shortly after her mother’s death, when she’s stuck at her grandfather’s house but knows the only place for her is where she and Vivienne left off – wandering, bouncing between towns and never laying roots. So she takes her swag and heads into the city – where she meets Silence, Arden and her place in their street family sends them all on a fateful collision course.

I am Friday Brown. I buried my mother. I ran away from a man who buried a swimming pool. A boy who can’t speak has adopted me. A girl kissed me. I broke and entered. Now I’m fantasising about a guy who’s a victim of a crime and I am the criminal. I’m going nowhere and every minute I’m not moving, I’m being tailgated by a curse that may or may not be real. They call me Friday. It has been foretold that on a Saturday, I will drown . . .


This novel feels a love letter to Australia. As in ‘All I Ever Wanted’, Wakefield doesn’t put a hard and fast name on her settings – Friday could be knocking around the city of Sydney or Melbourne, or even Wakefield’s hometown of Adelaide. But it doesn’t matter – because Wakefield excels in writing the feel of a place; the city streets with throngs of people that can make a person feel terribly alone. Friday takes to writing her thoughts in chalk on the pavement, and the many suited pedestrians who stroll by without making eye-contact could be from any Aussie city at all, it doesn’t matter. So too with the outback setting of the novel’s second half – a red-dusted stage where the city kids are chasing shade at an abandoned town. Wakefield does a sublime job of writing Australia for everyone – by not naming the places, readers instantly transpose their own memories and feelings to the unfolding scenes, and I loved that. But the anonymity doesn’t mean Wakefield’s settings have any less heart. As I said, ‘Friday Brown’ feels like a love letter to Australia, and never more than when Friday is recounting her childhood spent traveling from town to town;

Those were the unforgettable summers. There were outback towns where you couldn’t see the roads for red dust, grids of streets with wandering dogs and children who ran wild and swam naked in creeks. I remembered climbing ancient trees that had a heartbeat if you pressed your ear to them. Boomboom-boomboom. Dreamy nights sleeping by the campfire and waking up covered in fine ash, as if I'd slept through a nuclear holocaust. We were wanderers, always with our faces to the sun.


In reading ‘Friday Brown’, I kept thinking that Vikki Wakefield is a hard writer to pin down, and I love that too. That she’s a new shining star for Australian YA is a given. But her explorations in ‘Friday Brown’ are urban and fantastical, coming-of-age mixed with thriller. This is a hard novel, and that’s partly what makes it so good, but there’s something magic here too. Friday has only one crying eye, a drowning curse stalks her Saturday’s and her mother lives in the stories she remembers. There’s a touch of Alice Hoffman to Vikki Wakefield, I think.

What’s also unmistakeable is that Vikki Wakefield writes the tough stuff. ‘All I Ever Wanted’ gave us Mim, a girl from a troubled family and dangerous suburb who just wanted to get out. ‘Friday Brown’ presents us with life on the street, and the myriad of reasons a child might want to become a face on a missing poster. I cried and cried reading ‘Friday Brown’, but I so enjoyed the journey that I can’t begrudge Wakefield my tears. She earned them, every one. Her characters are so vivid and endearing, or vicious and infuriating that she makes you feel everything down to your bones. Silence was a beautiful, quiet boy who spoke with a rasp and felt in visible. Arden, by contrast, is a beautiful danger – and her characterisation was gorgeous, from her animal-like dreadlocked hair to the way Wakefield describes her fighting stance, she reminded me a bit of Alex Garland’s Sal, from ‘The Beach.’ I was dragged into these character’s lives and enjoyed every minute with them.

One thing I will say is that I don’t think Wakefield excels at writing traditional romance, and shouldn’t try to. I actually love that Wakefield often writes the antithesis to the romance of most young adult novels. Wish comes in the middle of Friday’s story, and she feels an almost instant, kismet attraction to him that comes to hold a bit more gravity towards the end – and for that reason may have needed to be strung out more in the middle. But I didn’t feel overly invested in that particular connection. I was more interested in Friday’s tender friendship with Silence, a different kind of love story but far more powerful, in my opinion. It happened in ‘All I Ever Wanted’ too, where I was glad that Mim’s daydreamed romance with Jordan Mullen soured in reality, and it was her relationship with his sister, Kate, that I found myself more enthralled by. I feel like Wakefield almost veered towards the more traditional love story stuff with Wish and Friday, and I didn’t need it at all – not when there was plenty more to be read in Friday’s relationships with Silence and Arden.

I’m so happy to have Vikki Wakefield for Australian YA. She definitely brings something vital and individual to the genre – writing about tough but lonely girls, the friendships that save them and the past that haunts them. ‘Friday Brown’, like her debut, is Wakefield writing the tough stuff – this time about street life and missing someone so much that you lose yourself when you lose them. I loved this book from the bottom of my heart to the tips of my toes. But now, of course, comes the terrible downtime between Vikki Wakefield releases, when I have to wait for her next book to come into my life. Sigh. 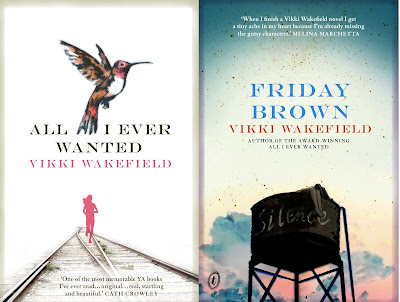