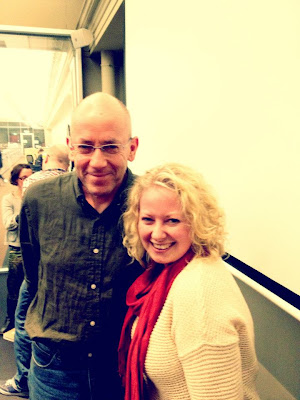 Me and Morris Gleitzman (yes, I'm bright red and a little teary. IT WAS AN EMOTIONAL EXPERIENCE! Shut up.)

Yesterday I went to a wonderful Melbourne Writers Festival event. In a little room of The Wheeler Centre, I attended ‘The Art of Writing for Children and Young Adults’ seminar, chaired by the lovely Penni Russon (‘Only Ever,Always’) and featuring two of my all-time favourite writers: Morris Gleitzman and Melina Marchetta.

Between them, Gleitzman and Marchetta are perhaps the pinnacles of Australian children’s and young adult literature, and there was a wealth of knowledge between them that we really only scratched the surface of in three (glorious!) hours.

The session started with Morris Gleitzman; he really focused on his ‘Once’ series (which came to a close this year with fourth and final book, ‘After’) but he also spoke at length on the limitless topics that should be explored in children’s books (no matter how dark or taboo adult ‘gatekeepers’ may deem them).

I madly scribbled notes throughout the three hour seminar, and for that reason I’ll be breaking my post up between Morris’s session and Melina’s.

So, first up, the man who narrated my childhood and continues to tug at my heartstrings with the ‘Once’ series . . . the wonderful, Morris Gleitzman!


•    He suggested that, if at all possible, make your first book a controversial one. Morris Gleitzman’s debut novel was ‘The Other Facts of Life’, released in 1985, but it wasn’t until the 1990 release of ‘Two Weeks with the Queen’ that he really catapulted into the bookish stratosphere. ‘Two Weeks’ was not only about a young boy coping with his brother’s terminal illness, but it also featured two gay male characters in a loving relationship. For this reason the book was often subjected to the ‘gate-keeping’ of teachers and librarians, and really found its audience by word-of-mouth amongst children, who passed it on to friends until it found a life (and success) of its own. Of course, Gleitzman didn’t set out to make ‘Two Weeks’ deliberately divisive, but it certainly helped him get noticed. It was also a boon when the novel was adapted for the stage, and performed across Australia and the UK.

•    He warned that those writing for young people will have to accept that there is a certain stigma attached. Young adult and children’s authors don’t fit into the ‘mainstream’ (and by that, he means adult fiction).

•    When it comes to writing – all stories are about problems, but the plot of any book should be about the BIGGEST problem in the protagonist’s life at that particular point in time. Remember, there is no such thing as a problem-free life (and wouldn’t that be boring anyway?), storytelling is really all about problem-solving. When writing your story, you should make the main character’s problem as feasibly big as it can be, and always have the option for two possible endings (if not more – to keep the reader guessing). And there are really only three outcomes for any problem: Solve. Improve. Survive. Even if you can’t solve a problem, you learn from the struggle (and survival) and everyone changes in the problem-solving process, and learn from what works and what doesn’t. He said that people are capable of anything, even failing – and it’s important to write that too, to show that there are no guarantees in life (this is a common theme in Gleitzman’s work: vital honesty)

•     With his ‘Once’ series, the initial idea behind the books was ‘friendship’. In his many years as a children’s author and speaking to so many young people, Gleitzman really loved the concept of friendship as universal, and prevailing even in the face of catastrophe (watching the nightly news and seeing how truly horrible the world and human beings can be to one another). But to explore the concept of ‘friendship’, while also giving his protagonist one of those BIG problems – he thought to ask the question ‘what is friendship capable of?’ Gleitzman has family-ties to the Holocaust (his grandfather was a Jew living in Poland, who left before the war but lost most of his extended family) and that’s where the idea for a WWII setting started for him. But he also remembered the words Elie Wiesel, a  prominent Jewish author who was also Holocaust survivor, and believed “if you weren’t there, don’t write about it.” It is a very sensitive subject, but Gleitzman truly believes (and I 100% agree) that children need to know the history of the Holocaust. Children are going to take over the reins of the world one day; they should know what human beings are capable of in our darkest hours. So the idea to explore friendship and its capabilities came, with one young Jewish protagonist called Felix, and his non-Jewish friend called Zelda.

•    Gleitzman warned that in this session, since it was a fairly intimate workshop, he would discuss some ‘Once’ spoilers. So, SPOILER ALERT. . .  he discussed how Zelda and Felix were really ambassadors for the some two million Jewish children of the Holocaust. Tragically, many of those children did not survive – so to be truthful to the history he was writing, he knew Zelda had to die in ‘Then’. He maintains it was the hardest thing he has ever had to write, and many of his young readers have never forgiven him (he then said, “I have never forgiven myself.”) But it was because of Zelda’s death that he felt the need to carry on Felix’s story with ‘Now’, and revisit him as an 80-year-old man. Gleitzman gave Felix a chance to confront his childhood with the Black Saturday Bushfires – a modern, Australian disaster that would force Felix to reflect on his own childhood, prompted by the fire’s size, power and blind malevolence. And then of course, Gleitzman decided to revisit Felix in the last months of the war with his latest novel, ‘After’. In this fourth and final book, Gleitzman wanted to show Felix’s experience that made him into a surgeon – and, in particular, that he had a choice between healing and killing.

•    Morris Gleitzman said so many clever, wonderful things – but what really stood out and resonated with me was when he said that everything in the world has a place in young people’s stories. If it’s in the world, it’s for them. Gleitzman has certainly proven this with his books over and over again; in his writing about AIDS (‘Two Weeks with the Queen’), refugees and the Australian boat people debate (‘Girl Underground’), corruption of extreme religion (‘Grace’) and of course the Holocaust in his ‘Once’ series. I love that he writes without boundaries or taboos for young people – that’s partly why I think he is an enduring voice in children’s literature, because he doesn’t write down to his audience and nothing is off-limits.

•    Now, on the mechanics of how he writes. Penni Russon asked if he considers himself a ‘planner’ or a ‘pantser’ (fly-by-the-seat-of-your-pants writing) Morris really loved this term, and called himself “a planner with pantser moments.” He always starts by meeting  characters in his imagination, and will often spend 1-2 years ‘getting to know them’ until his relationship with them develops, just like a real friendship (interesting to note that he often has 2-3 story ideas circling his head at any given time, but he *writes* them one at a time). He did mention that the needs of the novelist VS needs of the characters can often be at loggerheads. As a writer who becomes ‘friends’ with his protagonists (and even says the collective ‘us’ when talking about them) he would love nothing more than for them to have a problem-free life, free of heartache and struggle. But really, as a novelist he needs to put those characters through hardships and write those BIG problems. It’s the push-pull of being safe, or writing a good story.

•    He plans by writing 2-4 pages of chapter notes, which covers the character’s emotional and physical journey (he picked up this planning habit from scriptwriting, where every minute of screen-time costs lots of $$$ so every scene has to be vital). He will often re-write and draft these chapter notes 10 times.

•    Gleitzman likes to think of his chapter plans as a road-map; that in the actual writing process he might go ‘off-road’, meander down a pretty side-street or take a shortcut, but if he ever gets lost he can refer to those notes and know where he was always meant to be to get back on track and retrace his steps. But he also noted that “some people are just pantsers from day-one” and it’s okay that not all people are planners. But he did make a valid point that whereas he writes about three drafts, the pantser authors he knows can write up to 11 drafts.

•    Really interesting that he mentioned the two seeming ‘taboos’ in children’s literature are sex and religion. But it’s important to remember that the world of Young Adult and Children’s literature will always be mediated by adults – they are gatekeepers and have a great deal of influence over what young people have access to reading. But it’s also important to note that all readers bring their own prejudices and experiences to the page – which changes the innocence of a scene with adult readers (he used the example of ‘Adults Only’ in which a young boy hides under a bed when two adults come into the room, obviously for a nap, and then become restless as they toss and turn on the bed above him. Many librarians asked Morris why he wrote such a lewd sex scene – and he maintains that many young people won’t read more into that than what the protagonist assumed was going on).

•    Morris finished the session on another gem of a thought, which I've been mulling over ever since. He said that it’s important to impart empathy and resilience on children, to teach them those two vital life skills. He also said that kids have an innate resilience and optimism (which the world, life, and growing up seems to knock out of them – all the more reason to emphasise those life lessons early on, so that they hopefully become ingrained). 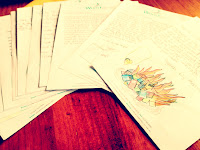 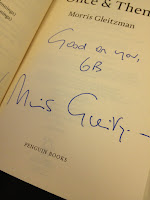 I would also like to give a quick shout-out of THANKS to my Penguin insider (the lovely Felicity, who is also an awesome photographer!) who made sure I was able to give Mr Gleitzman a stack of letters that my cousin’s year six class wrote for him. They were studying ‘Australians at War’ this term, and I suggested she read his novel ‘Once’. Well, she only intended to read the first book but the kids did a little investigating, and when they discovered that ‘Once’ was the first in a series they wouldn’t let her get away with not reading the others. She was a little concerned about the tragic events of ‘Then’ (and her kids were devastated) but they all LOVED the series so much – she had many reluctant readers in her class, but they were all converted by Gleitzman’s story of Felix and his best friend, Zelda. But, perhaps most importantly, the kids really started to connect Felix’s story with the real events of the Holocaust. What seemed unbelievable in a history lesson suddenly took on life and tragedy when reading Felix’s first-hand account of the heartbreak. I also got their class copies of the books signed by Morris, and apparently the kids are OVER-THE-MOON! They can’t quite believe that there’s a real-life, actual human-author behind the books. Or that their teacher’s cousin actually met him!