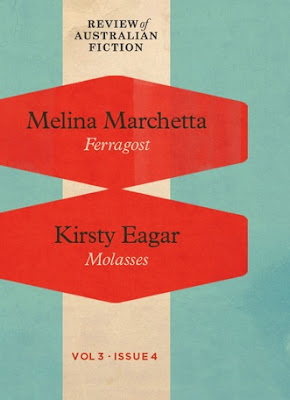 This is the fourth issue of Volume Three of the Review of Australian Fiction. It contains a new story by Melina Marchetta, Ferragost, a 15,000 word Lady Celie adventure, and a story Kirsty Eagar, Molasses.


‘Review of Australian Fiction’ has been a wonderful short story enterprise that pairs an established writer with an ‘emerging writer’ every issue. The latest offering, Volume 3 Issue 4, has Melina Marchetta headlining along with the emerging writer she hand-picked to share her issue, Kirsty Eagar. As the Editorial for the issue mentions, when Ms Marchetta was first approached to contribute to the Review, Eagar was an up-and-coming author. But that has all changed since the 2009 release of her debut novel ‘Raw Blue’, which went on to win the Victorian Premier's Literary Award and is one of the few Aussie YA books to make the prestigious NPR ‘Best-Ever Teen Novels?’ poll (quite a feat, considering ‘Raw Blue’ has never been released in the US!). And so this particular issue of the ‘Review of Australian Fiction’ is a veritable Aussie YA boon – pairing two of our most beloved and respected young adult authors and offering up two delicious slices of short story from both.

‘Ferragost’ opens with the discovery of Borealis Luby’s dead body. He is found amid jagged rocks, having seemingly flung himself from the high window of his room in Ferragost Castle. But Lady Celie of the Lumateran Flatlands is not convinced that his death is as simple as suicide, not with his head bashed in and Ferragost maids whispering of devious deeds being carried out in the name of the Queen . . . .

Celie turns to Castellan of Ferragost Castle, Mr Banyon, for help in her suspicions. But Banyon has his own investigation underway, one that places a great deal of suspicion (correctly) on Lady Celie being a spy sent by her Queen Isaboe. Meanwhile, Celie also seeks help in her private investigations from Ferragost native, Argus Laraunt who is a walking mystery unto himself;

‘Do you believe in curses and damnation, lady Celie?’ Argus Laraunt asked, and she saw fear in his eyes.
Celie shuddered. ‘Oh Mr Laraunt, I’m a Lumateran. My people were torn apart for ten years because of curses and damnation. I’m not the one to ask such a question of.’


‘Ferragost’ is a wonderful, twisting mystery from Melina Marchetta. This short story has a feel of Umberto Eco to it; with a pervading sense of menace stalking Celie in the darkened halls of Ferragost Castle, while whispers of death hint at a delicious combination of politics and horror. The events in ‘Ferragost’ are happening at the same time as the events in ‘Quintana’, so we’ll understand the larger role Celie plays when ‘Quintana of Charyn’ is released next month. I can’t wait to read more of Celie, for she proves herself to be quite a conundrum and interesting character – with a sickly, timid appearance belying steely resolve, quick thinking and even more admirable traits readers can see are, partly, influences of the wonderful Queen Isaboe.

I also loved reading about Celie and ‘Keeper of Ferragost’, Mr Banyon. By now followers of her work know that Ms Marchetta favours the unexpected in her characters’ romances, and that’s especially true of Celie and Banyon. I feel like we have only just scratched the surface of them in ‘Ferragost’, and I can’t wait to read more in the highly-anticipated ‘Quintana of Charyn’.

Kirsty Eagar’s ‘Molasses’ is set just outside of Rockhampton, Queensland and concentrates on four friends whose lives, already rocked by one seeming miracle, are set to change yet again . . .

The story focuses on Amelia Coady, who is bearing witness to the evolving relationship between her brother, Chris, and her best friend Megan. Feeling like a bystander in their changing dynamic, Amelia reminisces about the seismic shifts that started happening long before Chris started casting long looks at Megan from the back of the school bus . . .

Amelia remembers a few years back, when Chris was bed-ridden with Guillain–Barré syndrome, ascending paralysis in his legs leaving him dependent on their needlessly cruel mother, Jessie. She and Chris started devising plans and promises to one day escape their home, where Jessie and their step-father Ray are in a constant battle of wills over a safe cemented into the shed floor . . . but their escape depends on Chris getting better, by some miracle. But it’s not until Chris’s best friend, Trevor, and his cousin, Megan, enter into their orbits that real change begins.

‘Molasses’ is a wonderful ode to small country towns, and the suffocating lives being lived within them. Eagar’s pitch-perfect descriptions had echoes of Honey Brown for me, for her precise and heartbreakingly lovely setting;

Town. It looked better in the dark, or when viewed from a distance. From Jarmoya at night, it was a glow in the belly of the southern sky. A calling. Street lights, night clubs and fights. By day, the town was sun-slapped and sweaty, lying like a dying pet at the foot of the Berserker Range; snaked by an old brown river, fed by the Bruce Highway, and striped by the Tropic of Capricorn. It was a place where people crossed the road slowly, the bitumen sucking at their thongs. A beef town with sale yards and abattoirs, two bridges – the ‘old’ bridge and the ‘new’ bridge – and a bigger population of both people and bull statues than those down south realised.


The heart of this short story is the foursome of Amelia, Chris, Megan and Trevor – all seventeen and meaning more to each other with each passing day they spend stuck in this town together. There’s something magic in this friendship, and I loved that Eagar didn’t feel the need to drag out or strip down their barest hint of enchantment – it may even just come down to something as intangible as belief, but it’s beautiful for being understated. 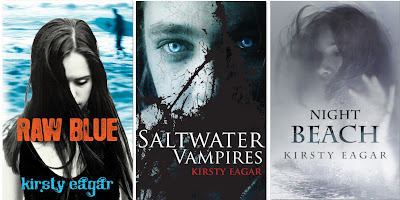 Volume 3 Issue 4 ‘Review of Australian Fiction’ is a little Aussie YA gem – fans of both Melina Marchetta and Kirsty Eagar will know what a prize these two short stories are, from two of our most beloved young adult authors. But I also hope that those unfamiliar with Marchetta and Eagar (perhaps even unfamiliar with the entire glorious underbelly of Aussie YA?) will read these stories and be prompted to delve deeper.