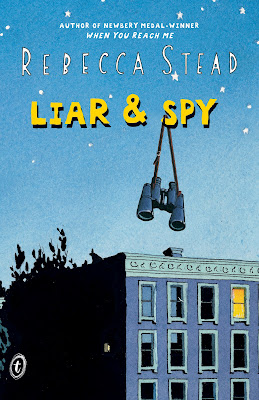 When Georges moves into a Brooklyn apartment building, he meets Safer, a twelve-year-old coffee-drinking loner and self-appointed spy. Georges becomes Safer’s first spy club recruit. His assignment? Tracking the mysterious Mr X, who lives in the apartment upstairs. But as Safer becomes more demanding, Georges starts to wonder: how far is too far to go for your only friend?

Rebecca Stead’s characters are delightfully engaging, and she has woven intricate ideas into a beautiful story. Liar & Spy is an inspired, often-funny novel for middle grade kids about friendship, fears, bullying and how to deal with your worries. It will keep readers guessing until the very end.

Georges is named after Georges Seurat, a famous French Post-Impressionist painter. Georges (the painter) was famous for using the pointillism technique; whereby small, distinct dots of pure colour are applied in patterns to form an image. Georges (the boy) can apply the pointillism technique to his life, the way his mum taught him. He thinks of the small dot that was his best friend, Jason, who no longer hangs out with him, and has become friends with the bullies who call him ‘Gorgeous’ (thanks to that silent ‘s’ in his name). He thinks of the small dot that is his dad losing his architecture job, and them having to move out of their perfect house into a small Brooklyn apartment. He thinks his mum’s longer work shifts at the hospital are one small dot. He thinks of the small dot that is the upcoming taste-test in Mr. Landau’s class, which may or may not decide his destiny. And all of these small dots, when Georges connects them, make up the big picture of his life and represent how insignificant the tough stuff can seem in the grand scheme of things . . .

Mom says that our Seurat poster reminds her to look at the big picture. Like when it hurts to think about selling the house, she tells herself how that bad feeling is just one dot in the giant Seurat painting of our lives.


And then Georges meets Safer, who becomes a very big dot in the grand scheme of George’s new life. . .

Safer is the dog-walker and resident spy of the apartment complex Georges and his family have just moved into. Safer’s sister is Candy who is aptly named for her sweet tooth. Safer’s parents are ‘smart bohemians’ who home-school their children and let them express themselves in odd ways. Safer expresses himself by being a spy, and his latest mission (obsession) is the mysterious black-clad tenant of their apartment complex. And Safer wants Georges’s help in his latest spy-club mission.

Confession: I think I have a bit of a telepathic bond with Rebecca Stead. I don’t want to sound crazy, but it’s true. Because after reading Stead’s brilliant ‘When You Reach Me’ earlier this year, I likened the book to a Seurat painting – whereby all the dots of characters and plots seemed indecipherable and disconnected for much of the book, until the ending made you step back and admire "A Sunday on La Grande Jatte". 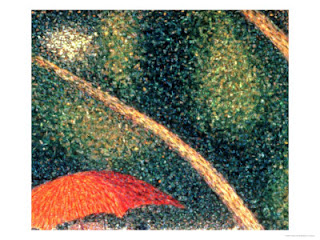 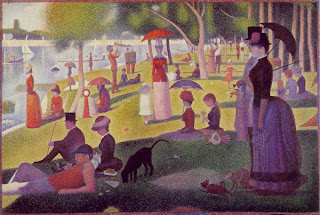 After my review went live, Rebecca Stead even Tweeted to me the coincidence that Seurat would be mentioned in her next book. Hence, my totally legitimate telepathic bond with Rebecca Stead. See? Not crazy.

But there’s a lot more to ‘Liar & Spy’ than just this wonderful Seurat (‘Sir Ott’, to Georges) analogy. This is a book about a young boy living day-to-day; trying to get through the school week with minimal collateral damage from the bullies who tease him and the ex-best friend who doesn’t seem to want him anymore. Actually, a lot of Georges’s life is spent just grinning and bearing it – getting from Point A to Point B with the least amount of fallout. And his mum’s Seurat dot analogy about the grand scheme of things is fine, but Georges seems to spend a good deal of his time focusing on the BIG PICTURE while wading through the misery of all those little dots.

And then Georges meets Safer. Safer is a brilliant and cunning young man who Georges swings between being impressed and distressed by. Because his dad’s idea of a joke is signing him up for a Spy Club Meeting, Georges gets pulled into Safer’s latest mission involving the tenant who lives in the apartment below him, who never seems to be home, always carries a briefcase with indeterminate contents and is frequently seen wearing black. And suddenly Georges can’t just look at the big picture, because Safer is teaching him that to be a spy you have to look at the minute details and pay attention to all the dots and how they connect.

I loved ‘Liar & Spy’. What Stead does so well is explore seemingly minor occurrences in a young person’s life – but gives them the weight they deserve. And usually, it’s those small instances that make a much bigger impact. For Miranda in ‘When You Reach Me’ it was coming to terms with the sudden loss of her friendship with Sal, for some unknown reason he does not care to explain to her. For Georges, it’s his dad losing his job and his family having to move from their perfect house his dad designed, to a small Brooklyn apartment and his mum working late all the time and sounding forever tired on the phone. I think this is what grabs her young readers; these small problems they can relate to (and find an author who gives them the importance and exploration they deserve), but I also think this is where her older readers can vividly remember and be transported to their youth.

I also enjoy how Stead so perfectly articulates little everyday things, but it’s not until I read them that I realize I've experienced them too. Example?:

I’m hearing a sound. It’s a funny, high-pitched buzzing that I think maybe I've been hearing for a while, without noticing. There should be a word for that, when you hear something and simultaneously realize that it’s been swimming around in your brain for five minutes without your permission.


I will say that ‘When You Reach Me’ is still my favourite Stead book, purely because the aforementioned bigger picture was so epic and brilliantly woven throughout that book. The big reveal at the end of ‘Liar & Spy’ was not so grandiose. Whereas my reaction to all the dots forming at the end of ‘When You Reach Me’ was OMIGOD, my reaction at the end of ‘Liar & Spy’ was more “Oh. Huh.” But that’s not to say I didn’t immensely enjoy everything that came before the somewhat ho-hum ending. Rebecca Stead is still, without a doubt, one of the best children’s authors writing today. 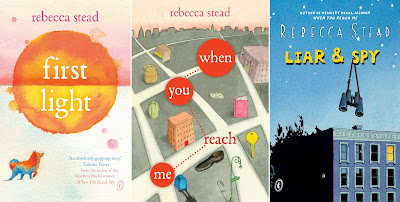