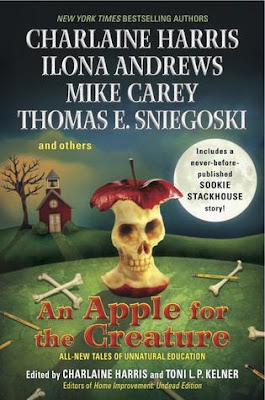 What could be scarier than the first day of school? A crash course in the paranormal from Charlaine Harris and Toni L. P. Kelner, editors of ‘Home Improvement: Undead Edition’. Your worst school nightmares will pale in comparison to these thirteen original stories that take academic anxiety to new realms.

This is only a review of ‘Magic Tests’ by Ilona Andrews


Julie Lennart-Olsen is princess of the Pack and ward to pack-master Curran and his mate, Kate Daniels. She knows her important place in the pack hierarchy, and what is expected of her as ward to two of the most powerful people in Atlanta. But what Julie cannot abide, what is far too awful for words, pomp and circumstance is . . . school. Julie once went so far as to mail herself back to Kate rather than remain at her hated boarding school. That’s why Julie can’t quite believe that Kate is insisting Julie start attending a new school, and the horrible cycle is going to begin all over again. Or is it?

Kate has ulterior motives for sending Julie to a particular Atlanta school, where a young girl called Ashlyn has gone missing – and nobody seems to be lifting a finger to find her. Luckily Julie is up for the task, but she may not be prepared for what she uncovers in her search for a missing schoolgirl . . .

‘Magic Tests’ is the new short story set in the ‘Kate Daniels’ universe, by Ilona Andrews and appearing in the paranormal anthology ‘An Apple for the Creature’.

I said it after reading ‘Gunmetal Magic’, and now I really, truly believe it. Kate Daniels’s young ward, Julie, is utterly deserving of her very own spin-off. If not a stand-alone book, then Julie could most assuredly carry her own young adult spin-off series. And to anyone who doesn’t think she’s up to the task, I would direct you to ‘Magic Tests’, which highlights Julie’s mettle and sprouts a cast of interesting secondary characters around her.

On her first day of school (and on the hunt for missing Ashlyn) Julie is paired with Brook, a straight-A student with blinkers on but who nevertheless agrees to help Julie in her investigations. Tagging along, if only to nag at Brook, is class clown Barka and keeping a weathered eye on Julie’s progress is class telekinetic, Lisa, who is adamant that Ashlyn is dead and Julie is wasting her time.

But the story takes a particularly interesting turn when Julie’s investigations lead her to the “odd Chinese guy” who everyone seems convinced is an ex-convict, and mafia-affiliated. Yu Fong certainly encourages the rumours swirling around him, even going so far as to appoint two student bodyguards to watch over him in the cafeteria. When Julie lays eyes on him, she’s amazed at his physical perfection and clear magic force – and speaking to him clears nothing up. He recognizes Julie’s ‘Lennart’ surname, and seems disturbingly knowledgeable about all things pack. But in the midst of her investigations, Yu Fong also becomes rather interested in Julie;

Thin tendrils of smoke escaped from his book. The table near him must have been much hotter than on my end. That had to be something because the metal was now hurting my fingers.
“If I find out that you hurt Ashlyn, I’ll hurt you back,” I said.
“I’ll keep that in mind.”
“Do. Your book is smoking.”
He picked it up. I slowly raised my hand, blew on my skin, and got up to leave.
“Why do you care?” he asked.
“Because none of you do. Look around you – a girl is missing. A girl you saw in class every day got so scared by something, she had to hide from it. Nobody is looking for her. All of you are just going on with your business as usual. You have all this power and you didn’t lie a finger to help her. You just sit there, reading your book, comfy behind your bodyguards, and demonstrate how awesome your magic is by heating up your table. Somebody has to find her. I decided to be that somebody.”


There was nothing better than reading Julie turn gumshoe and finally get a chance to see how much of an influence Kate has had over her moral character. Julie absolutely shines in ‘Magic Tests’, and it was wonderful to read her own world (at once connected, and outside the Pack) take shape and expand.

The real highlight of this book is the mysterious Yu Fong. Not necessarily a romantic connection for Julie (she has more than enough on her hands, between Derek and Ascanio) but once we discover what Yu Fong is, and the potential power he wields, there’s no mistaking he could be a formidable force in Julie’s life . . . and this is Julie’s life now, we are left to assume. She makes connections and friends at this school, and finds that she can stand on her own two feet away from Kate and the Pack (much as she may love them both, respectively.) Of course what this short is missing is the aforementioned Derek and Ascanio – but like I said in the beginning, ‘Magic Tests’ reads like a delicious teaser of endless possibility. I dare think that if (or is that, when?) Derek and Ascanio move into Julie’s new orbit, Ilona Andrews will have yet another hit on their hands. . .