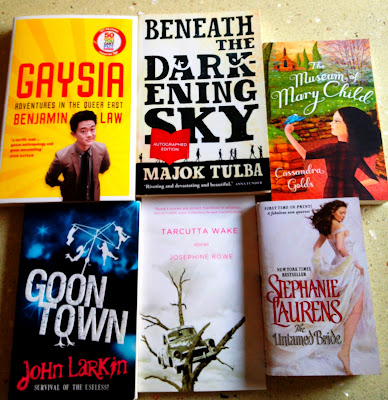 In the meantime, I was admiring my MWF book haul and how wildly eclectic my tastes appear based on these book purchases. But quite a few of my bookish choices were either directly informed by events I attended, or by word-of-mouth buzz from around the festival. So I just thought I'd go through my purchases as a last little ‘sayonara’ to the happiest, bookish time of year.

1.    ‘Gaysia: Adventures in the Queer East’ by Benjamin Law

I’m probably most upset that I didn’t attend any Benjamin Law events. It simply came down to time-constraints and event clashes. Nevertheless, I showed my appreciation for this author by squealing when I saw his second book at the MWF bookshop (it wasn’t slated for release until September). I loved ‘The Family Law’ and have been really looking forward to his follow-up.

2.    ‘Beneath the Darkening Sky’ by Majok Tulba

I attended a session for work, called ‘The Other Africa’ in which Majok was one of four African writer panellists. He was introduced, and the event chair spoke about Majok’s true story, which was absolutely harrowing – raised in South Sudan, his village was raided by Sudanese Armed Forces when he was nine-years-old, and many members of his family were killed. Majok barely escaped the SAF and life as a child soldier, but became an Australian refugee at age 13 and then spent much of his time in limbo. Now, from that story (and being told that ‘Beneath the Darkening Sky’ is about child soldiers) the audience were in a certain frame of mind, until Majok spoke. He was so warm and funny; and told the story of being eight and a half years old when he was handed an AK47 by a Sudanese soldier, but toppling over because his head was too big and body too small to hold the gun. That was, ultimately, what saved him from the fate of a child soldier. The audience laughed, and I immediately promised myself I'd go and buy his book, I was so fascinated to read about a man who had such tragedy in his past, but could still be so warm and inspiring. Really looking forward to reading this one, but my grandma has already ‘called dibs’ and asked to read it first. I await her very valuable opinion.
•

3.    ‘The Museum of Mary Child’ by Cassandra Golds

This was partly me being suckered in by a gorgeous cover, and partly the convenience of having the GoodReads app on my iphone to see that most of my trusted GR friends have read this book, and raved about it. I think I saw someone's description of the book as ‘psychotic orphanage’ and was sold. Looking forward to reading this one.

I made the supreme mistake of waiting an hour or two after attending the ‘Reading into Writing’ session, before I went down to the MWF bookshop. After that session I was really curious about John Larkin’s novel ‘The Shadow Girl’, because he said she was based on a real homeless girl he met at a school event once, who lived on the trains and cried when he gave her one of his books to read. Sadly, after the fabulous ‘Reading into Writing’ seminar all the school kids must have descended on the MWF bookshop – because the only John Larkin novel left was, literally, a single copy of ‘Goon Town’. So I snatched this sole surviving copy up (and felt a little heroic when the cashier commented, “last one left in the shop!”) and intend to read this, but also go hunting for a copy of ‘The Shadow Girl’, so moved was I by Larkin’s talk during ‘Reading into Writing’.
•

I am sooooooooooo upset that I didn’t get to attend the Josephine Rowe event. Literally a week before the Festival started, I borrowed her first book of short stories, ‘How a Moth Becomes a Boat’, from my public library and fell in love. But it wasn’t until I was in the MWF bookshop and spotted that very same book on the shelves (and made the connection that Ms Rowe must be attending MWF!) that I looked her up and saw that I'd missed her ‘Micro Fictions’ session that had already been and gone. Drats, drats, drats! Rowe writes (as the title of her event suggested) ‘Micro Fiction’ – short stories that are sometimes 500 words or so, but no less beautiful for being so much shorter. I’m really quite in awe of her, and had started hunting (unsuccessfully) for copies of her second book of micro fiction before striking gold and finding it at MWF. So that’s good. And now I intend to write a review of the two books together. But I still would have loved to listen to her and maybe meet her. Like I said, ‘drats!’

6.    ‘The Untamed Bride’ by Stephanie Laurens

I heard from two blogger friends that the Stephanie Laurens romance sessions were fantastic! Apparently she spoke at length on a pet-hate subject of mine – gaudy, smutty romance covers that seem targeted at male buyers of ‘Playboy’, but are actually intended for female readers (apparently marketing departments are going for that split-second-decision sale at the checkout line of a supermarket, the more eye-catching, the better – which in itself is an insult to the historical romance genre and its readership. *sigh*) Another friend said she learned an interesting factoid, which is that Bryce Courtenay is often cited as being the highest-selling Australian novelist, but in fact it’s Stephanie Laurens (who doesn’t get the kudos because her genre-of-choice is seen as being ‘less worthy’, perhaps?). Anyway, both of these second-hand accounts of Stephanie Laurens sessions made me want to read her, so I bought the first book of her ‘Black Cobra Quarter’ out of solidarity with the historical romance readership! I was quite chuffed to see that in the MWF bookshop, Ms Laurens had the most shelf space of any author, taking up 3-4 with her many, many books. 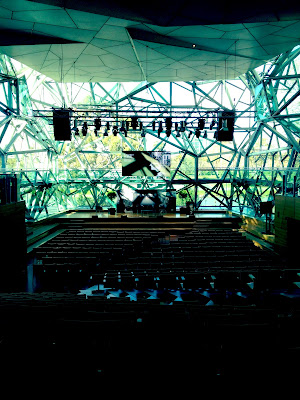 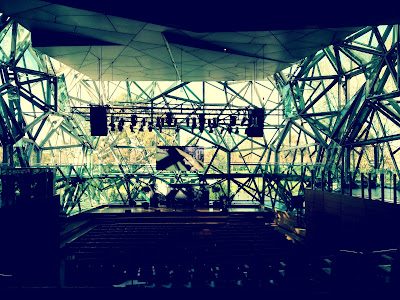