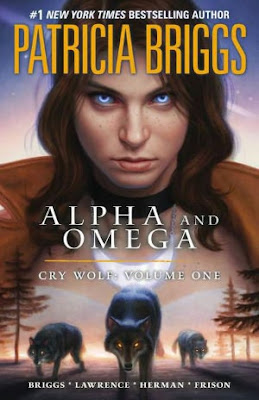 Anna never knew werewolves existed, until the night she survived a violent attack…and became one herself. After three years at the bottom of the pack, she’s learned to keep her head down and never, ever trust dominant males. Then Charles Cornick, the enforcer—and son—of the leader of the North American werewolves, came into her life.

Charles insists that not only is Anna his mate, but she is also a rare and valued Omega wolf. And it is Anna’s inner strength and calming presence that will prove invaluable as she and Charles go on the hunt in search of a rogue werewolf—a creature bound in magic so dark that it could threaten all the pack…

‘Cry Wolf: Volume One’ is the first graphic novel instalment of ‘Alpha and Omega’, an adaptation of Patricia Briggs’s urban fantasy werewolf series of the same name.

‘Alpha and Omega’ is the second of Briggs’ series to get the graphic treatment, after her New York Times Bestseller ‘Mercy Thompson’ series was adapted in 2009. I was a very big fan of ‘Homecoming’, so was thrilled to learn that Anna and Charles (themselves a spin-off from Mercy’s world) would also be bought to drawn life. I was especially happy that the adaption would be based around the first book in their series, ‘Cry Wolf’ which follows Anna and Charles shortly after their first meeting under terrible circumstances in Chicago.

Anna was turned against her will by a crazed werewolf and beaten into submission at the hands of a sick and weakened Chicago pack. And then Charles Cornick, son to the Marrok in charge of the North American wolves, was sent to investigate the brutal goings-on in Chicago, where he met and fell quickly in love with Anna (with the help of their wolves too). After the terrible, bloody ending of the Chicago pack, we meet Anna and Charles at the beginning of ‘Cry Wolf’ when Anna is new to his Montana wilds home and finding her feet in Charles’s pack and family. 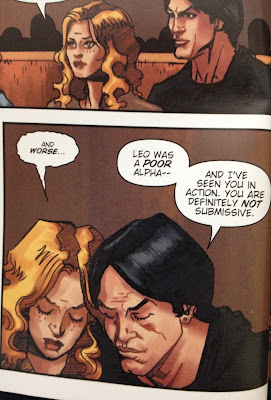 But Charles and Anna don’t get much of a honeymoon period – first because of the nightmares Anna still has, remembering her abuse at the hands of the male Chicago wolves, and then because of wolf attacks in the Montana mountains forcing Marrok, Bran Cornick, to send his son and executioner to investigate. Charles’s new wolf mate insists on tagging along, if only to take care of the injuries he sustained while saving her in Chicago. 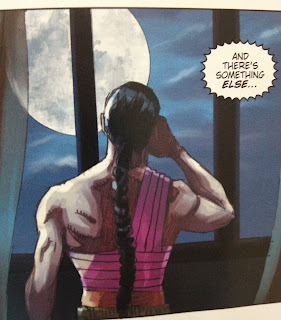 So, there’s plenty in Briggs’s ‘Cry Wolf’ story for readers to sink their teeth into – and the storyline was sure to offer some interesting illustrations. Particularly because quite a bit of ‘Cry Wolf’ is based at the pack home of Aspen Creek, and I’m sure curious fans will be eager to know the look of this werewolf hub. But just generally, ‘Cry Wolf’ has some lovely settings – with the snow-covered Montana Mountains making the backdrop for the second-half of the story.

This is also a really important story for Anna and Charles, because it’s really a chronicle of their coming together and I knew that would be hard to communicate in images. There’s a lot of tension and push-pull between Anna and Charles in ‘Cry Wolf’ – because they have only known each other for a few days, but their wolves have played a big hand in choosing one another for their ‘mates’. Their human sides are yet to catch up, and with Anna’s abuse still fresh in her mind, it makes for some friction between them. 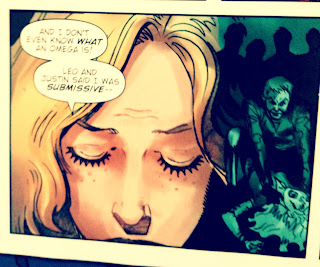 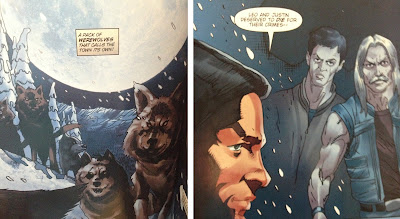 First of all, I think the story of Anna’s abuse at the hands of the Chicago pack is handled beautifully. I really didn’t want to see any awful images, and while artist Tod Herman has relayed the brutality, he doesn’t go too graphic with these. I also thought it was very telling that the flashback images of the violence Anna suffered often mimicked the images of wolf packs – to give the impression that Anna’s abusers were very much acting with a pack mentality separate from their human conscience. 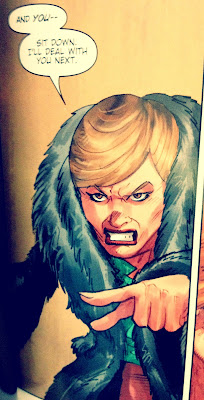 I also loved ‘Cry Wolf’ simply for being able to see what a few of my favourite characters look like. I will say that there were times when Herman’s drawings didn’t like quite right; not edgy enough or just a bit too simple. But then there were times when he nailed it; like Bran’s mate Leah (who reminded me of Claudia Furschtien from ‘The Chipmunk Adventure’ – but that oddly suits). I liked Asil and Samuel’s looks, and particularly appreciated Charles’s masculinity (even with the infamous pink bandage). But perhaps my favourite images were the issue covers by Jenny Frison – which I think beautifully captured the look of Anna and Charles, and were closer to how I pictured them in my mind. 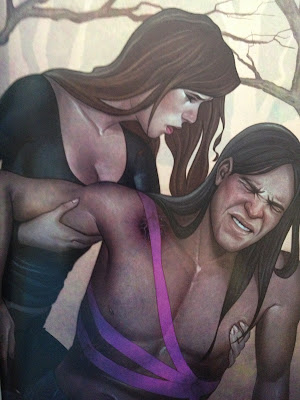 I’m a big fan of graphic adaptations; I think they add layers to the already intricate worlds built in urban fantasy stories and I think Briggs’ werewolf world is one of the most interesting to see drawn to life.