'This is Not a Test' by Courtney Summers 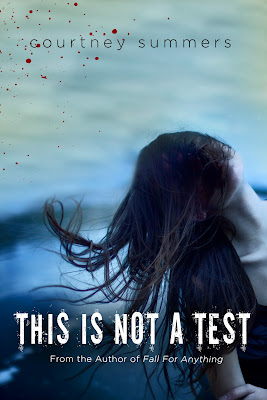 It’s the end of the world. Six students have taken cover in Cortege High but shelter is little comfort when the dead outside won’t stop pounding on the doors. One bite is all it takes to kill a person and bring them back as a monstrous version of their former self. To Sloane Price, that doesn’t sound so bad. Six months ago, her world collapsed and since then, she’s failed to find a reason to keep going. Now seems like the perfect time to give up. As Sloane eagerly waits for the barricades to fall, she’s forced to witness the apocalypse through the eyes of five people who actually want to live. But as the days crawl by, the motivations for survival change in startling ways and soon the group’s fate is determined less and less by what’s happening outside and more and more by the unpredictable and violent bids for life—and death—inside. When everything is gone, what do you hold on to?


Sloane Price was meant to escape a very different horror story, before she found herself in the middle of another one. She thought her life couldn’t get any worse than it has been these last six months – six months since her sister, Lily, left without her. Six months being her father’s only target. Six months wondering how Lily could do that to her, just leave. Just like that.

And then they came. People with grey-clouded eyes, mottled skin, slathering mouths. They do not die. They just keep coming.

Seven days later, Sloane is holed up in Cortege High with a cast of misfit survivors.

Harrison is only fifteen and new to the town of Cortege – he cries all the time. Grace is beautiful and compassionate, just as Sloane remembers from the brief time when they were childhood friends. Grace’s twin brother, Trace, has a hot temper and he is not accepting the fact that their parents are dead. Cary Chen was a no-hope stoner in school, but has proven himself a skilled survivalist since the world changed around them. Rhys was famous at school – he was an impossibly cool senior, always seen smoking with a bevy of beautiful girls. And then there’s Sloane … who carries a note in her pocket and a dark wish in her heart.


‘This is Not a Test’ is the new young adult novel by Courtney Summers. The novel was released in June this year, and I am woefully late in singing its praises.

I should start by saying I was aware of Courtney Summers before this book came out. I read ‘Cracked Up To Be’ back in 2009 and was blown away by it – by this infectiously interesting but unsettling teen book. I made a promise to myself then to read more of Summers’s work, so I’m ashamed to say that I’ve only just fulfilled that promise with ‘This is Not a Test’.

This is a zombie novel. But you must dispel any misconceptions you have about zombie novels before you start reading Courtney Summers’s take. Right from chapter one, even before any flesh-eating undead have lumbered onto the page, readers will quickly cotton onto the fact that our protagonist, Sloane Price, is already living a horror story of a very different nature. Her father has endless rules, one of the biggest being that she cannot leave the house with visible bruises. So she stays home, until they heal, and then he can give her fresh ones. Sloane must also eat everything on her plate before she can leave the table. She does not have friends. She does not talk back to her father. And she desperately wants to kill herself.

Sloane had a very different plan originally, one that included running away with her older sister Lily … but then Lily left without her. When we meet her, Sloane thinks she is at the brink of her life – she can go no further. And then a slathering, limping, mottle-skinned woman crashes through their front window, and Sloane’s horror story changes.

The novel then skips ahead to seven days later. The town of Cortege is burning, and six students may very well be all that is left. They have made a fortress of their High School, and now they wait. And wait. And wait.

Courtney Summer’s novel stings. That’s the first word that comes to mind with this very raw, very brutal but starkly beautiful and original novel. It stings, a little. She writes an incredible balance between Sloane’s personal struggles and dark memories, playing out against a high-octane thrill-ride that’s heart palpitating and scary. She’s also written an intense and fascinating novel about human nature, as these six teenagers come to terms with a crumbling world and their battle for survival.

But Sloane is really the stand out of this novel. She is a most curious character, and it’s a sort of chicken and egg debate as to whether she’s interesting because of the zombie storyline, or in spite of it? For starters, the zombie-apocalypse forces Sloane into a survivalist situation – which is darkly ironic when all she wants to do is die. At one point she muses about her suicidal wish that she’s already dead, she’s just waiting for her body to catch up. Oh! See what I mean about ‘this novel stings’? It’s those sorts of precise little gems that Summers pops into your head and makes you mull over – no matter how uncomfortable the question, you admire her for even asking it.

Sloane also offers an odd dichotomy for readers – because on the one hand, we’re rooting for her – we like her, we feel sorry for her and we know she deserves a better life than the one she has been dealt (even before the zombies came to town). The clash comes because while readers are hoping that Sloane survives in this post-apocalyptic world, Sloane herself doesn’t want to live. We’re barracking for a character who has given up on herself – so we’re just waiting for her to catch up and realize what we, as readers, figured out very early on – that she’s a survivor, and stronger than she could ever imagine. And she deserves to live.

The thing no one tells you about surviving, about the mere act of holding out, is how many hours are nothing because nothing happens.


Of course, this is still a zombie novel. Courtney Summers never forgets that, and certainly never lets readers forget it. But before you claim fatigue with the undead that seem to be over-populating bookshelves at the moment, I would implore you to read ‘This is not a Test’ for a beautifully different zombie-horror story. Summers stills asks sharp end-of-the-world questions;

It’s a while before she opens it and when she does, I glimpse cutouts of actors and musicians taped to the door and I wonder what they’re doing now, if they’re dead. I wonder if they’ve saved all the celebrities. When this is over, society will need entertainment to get past it. We’ll make movies about it, hundreds of movies, and in every one of them, we’ll be the heroes and the love interests and best friends and winners and we’ll watch these movies until we are so far removed from our own history, we’ll forget how it really felt to be here.


‘This is Not a Test’ is a scary, scary book. The undead are only ever just outside the High School doors and a succession of plot twists and OH-MY-GOD curveballs will have you holding the book in a sweaty-handed death-grip. As fascinating as Sloane’s inner turmoils are, Summers is equally brilliant at the action and base horror. Cortege High becomes ‘Lord of the Flies’ when there are power-struggles amongst the three boys and the undead start pounding on the doors.

‘This is Not a Test’ stings, just a little. It’s unsettling and thought-provoking, beautifully crafted with equal-parts human story and horror story. I must send out a big ‘thank you’ to Adele Walsh, for recommending me this book. And now I must read every single book in Courtney Summers’s back list. She’s one to watch, you mark my words.

Email ThisBlogThis!Share to TwitterShare to FacebookShare to Pinterest
Labels: Courtney Summers, YA