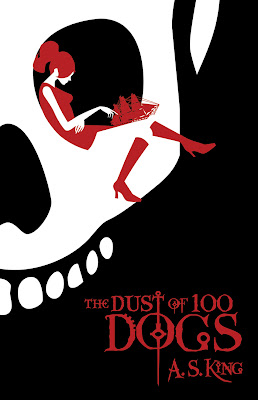 In the late seventeenth century, famed teenage pirate Emer Morrisey was on the cusp of escaping the pirate life with her one true love and unfathomable riches when she was slain and cursed with "the dust of one hundred dogs," dooming her to one hundred lives as a dog before returning to a human body-with her memories intact.

Now she's a contemporary American teenager and all she needs is a shovel and a ride to Jamaica.

Saffron Adams was born in 1972 in Hollow Ford, Pennsylvania. She is a genius daughter with alcoholic, pill-popping parents and a junkie brother called Junior. Saffron’s family are pinning all their hopes on her – to graduate valedictorian, get a full scholarship to a good college, study medicine, open her own practice and dig the family out of debt, depression and deprivation.

Saffron was also re-born and lived 100 lives as dogs of various breeds – Dobermans to Chihuahuas, Labradors and Terriers. Her canine reincarnation was thanks to a curse. A curse inherited by Saffron’s other memory…

Saffron Adams also remembers being Emer Morrisey, growing up in 1650’s Ireland when Cromwell’s army marches through, burning her home to the ground and murdering her entire family. She remembers her uncle coming for her, and not speaking at all during the years she lived with his tyranny, amongst her cowering aunt and cousins. She remembers falling in love with Seanie Carroll and planning to marry him – only to have her uncle ship her off to a rich French husband she quickly escaped from … and Saffron remembers Emer venturing to Tortuga, and falling into a life of piracy and villainy in which she sailed the high sea, killing Spaniards, taking rum and jewels and nearly out-running a mad Frenchman.

I’m doing it all backwards. My first experience reading one of A.S. King’s mad-cap young adult delicacies was with her 2010 novel ‘Please Ignore Vera Dietz.’ Since then she has most definitely cemented her place as one of my all-time favourite authors; particularly for ‘Everybody Sees the Ants’ in 2011 and most recently ‘Ask the Passengers’ this October. I was, of course, aware of ‘The Dust of 100 Dogs’. I bought a copy of the book immediately after reading ‘Vera Dietz’. But I didn’t read it. I put it off. It languished on my to-be-read pile for a whole year – that gorgeous silhouetted skull colour calling to me. I guess I was treating ‘The Dust of 100 Dogs’ like the last potato on my dinner plate – so good, something I knew I’d enjoy but I also wanted to savour it and save till last… And now, here we are. And let me tell you, ‘The Dust of 100 Dogs’ was thoroughly, golden-delicious.

This is a hard book to summarize – and if you want to know why, just look at the Verso (copyright) page and its keywords: Pirates. Reincarnation. Dogs.

Basically, Saffron Adams is growing up in Pennsylvania a seemingly normal American teenager. Except that she has the memories of the previous 100 lives she lived as various dogs. And she has the memories of a female pirate who roamed the high seas during the 1600’s, called Emer Morrisey. Even worse, Saffron remembers all of Emer’s worst memories – her family dying in Ireland, losing the love of her life and little bits of her humanity as she transformed into a cutthroat pirate. But the upside is that Saffron also remembers where Emer buried her biggest haul of treasure. Now all Saffron needs is to graduate high school, save some money and find a way to get to Jamaica.

There are three narratives woven throughout the novel. First there is Emer’s story – set in 1600’s Ireland and then moving to France and eventually Tortuga and surrounding famous pirate strongholds. Then there is Saffron’s modern-day story (leading up to 1990’s) as she struggles with her dependent, destructive family and all the hopes and dreams they’re pinning on her while she plots her escape to Jamaica. Half-way through the novel we start getting chapters based in modern Jamaica – told by a vile man named Fred Livingstone who yells at the voices in his head while spying on unsuspecting women through his telescope and reliving his ‘glory days’ as a date rapist. And interspersed throughout the book are a number of vignette tips on dogs (which could also work for humans) – this is Saffron recounting all that she learnt in her days as a canine – everything from why dogs like pack safety, to why you shouldn’t spoil your dog.

What’s really fantastically tricky about this novel is the distinction between Reincarnation and Rebirth. In the novel, Saffron is not Emer – she has her memories, just as she has the memories of those 100 dogs. But Saffron is her own entity, living her own life and with her own woes and worries. Saffron treats Emer like a sort of dear friend who she comes to rely on for bursts of strength and bravado (Saffron actually takes to fantasizing about pirate torture on those who annoy her, courtesy of Emer’s left-over memories).

First, she had me in college and running a local practice. Now, she had me having babies and obligingly understanding her warped view on life. I was only sixteen years old. Why was she making me imagine slicing her eyes out? Why was she forcing me to take my cutlass to the ligaments at the back of her knees?


I was reading it almost like Emer was a wonderful imaginary friend Saffron has carried around with her. Saffron and Emer actually have a really fascinating relationship – and I thought it was great to see how Saffron gained strength from Emer’s memories. The relationship is actually a very fond one, and considering these two women never meet on the page – in fact, one of them has been dead for some 300 years before the other is even born – the warmth and trust between them came across crystal clear to me. Particularly when Saffron finally gets to Jamaica, but feels somewhat abandoned by Emer whose memorial-courage isn’t as readily on tap:

Every part of me wanted to burst into miserable tears but instead I emptied my duffel bag on the quilted bedspread and looked at my stuff. I unfolded the army shovel and stared at myself in the mirror again, waiting to catch a glimpse of the woman who’d dragged me here – but all I saw was some skinny kid from Hollow Ford who was fooling herself.


And as the novel progresses, a larger question surfaces in which Saffron has to ask herself; is she really searching for physical treasure? Or is it a case of the more she follows Emer’s footsteps, the closer she gets to herself?

Anyone who has ever read any A.S. King novel knows that she likes the kooky. Her particular brand of surreal is often in the form of ghosts made manifest – whether they be Socrates, a dead best friend or a long-lost grandfather invading dreams… A.S. King has this wonderful preoccupation with the dead and buried who are still alive and kicking in her protagonist’s imagination. With that in mind, I could definitely see how ‘The Dust of 100 Dogs’ was a sort of story springboard for King’s subsequent novels. In ‘Dust’, death is made manifest within Saffron’s reincarnated memories. Emer lives on through Saffron, and continues to suffer the memories of losing her family, her love and her life all those hundreds of years ago.

I found one or two other minor connections in ‘Dust’ – little things that I imagine (in my fan-girl, obsessive way) provided the germs for thought that would become A.S. King’s next novels. Things like a ship Emer commands being called the Vera Cruz. Or those little doggy vignettes reminding me of similar side-stories of love’s impact in ‘Ask the Passengers’. So I actually came away from ‘The Dust of 100 Dogs’ thinking how wonderful it was to have read this first book last – to see where it all started, in a way, and to read A.S. King at the most extreme end of her kooky scale.

And this novel is kooky. There’s no denying that. It’s kookier than Vera talking to paper cut outs of her dead best friend, or Astrid sending her love up to planes or Lucky dreaming of saving a grandfather he never met. But, like all of King’s novels, ‘The Dust of 100 Dogs’ also balances the crazy with the beautiful. So even though it’s a novel about being a reincarnated pirate with memories of being reincarnated dogs – that’s just the interesting, helter-skelter plot. Underneath that I think ‘The Dust of 100 Dogs’ is about exploring this idea of whether or not history is doomed to repeat itself, and whether or not human beings can ever learn from past mistakes.

Email ThisBlogThis!Share to TwitterShare to FacebookShare to Pinterest
Labels: A.S. King, YA