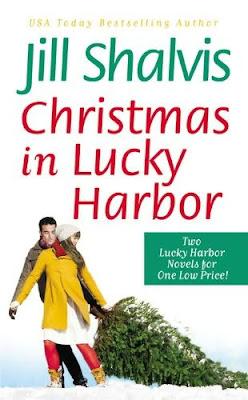 After losing her boyfriend and her job, Maddie leaves L.A. to claim her inheritance-a ramshackle inn nestled in the little town of Lucky Harbor, Washington. She sees the potential for a new home and a new career-if she can give the inn the makeover it needs. Enter Jax, a tall, handsome contractor who knows exactly what Maddie needs...

Helping her sister set up the family inn is just the thing to make Tara forget her ex-husband and focus on her new life. Until she meets a sexy, green-eyed sailor determined to keep her hot, bothered, and in his bed. When her ex reappears, Tara must confront her past and decide what she really wants.


If the sisters are lucky, they might just find that everything their hearts desire is right here in Lucky Harbor.

Phoebe Traeger died the same week that Maddie Moore finally got away from her abusive boyfriend and lost her job. Maddie really isn’t all that surprised – bad luck seems to follow her around like a plague. But if there’s a silver lining in the whole sad situation, it’s perhaps that although Maddie didn’t get to know her mother in life, after dying Phoebe left her three daughters with property inheritance in Lucky Harbor, Washington. Jobless, homeless and somewhat aimless, this may very well be the fresh start Maddie needs to cancel out her bad luck curse – and it might mean that her mother is giving her in death what she never could in life – stability and family.

Maddie’s older sister, Tara, and younger sister, Chloe, are also making the trek out to Lucky Harbor. But while Maddie is coming to Phoebe Traeger’s run-down hotel in the hopes of rebuilding it and starting a life there, Tara and Chloe are coming to settle their mother’s will and hopefully sell the property.

Phoebe’s three daughters all have different fathers, and were raised separately. While Chloe and Tara sometimes spent time together in their childhood, and are somewhat familiar with Lucky Harbor, the sleepy Washington town is all new to Maddie. And while Tara and Chloe were acquainted with their mother, Phoebe was a virtual stranger to Maddie.

But Lucky Harbor is not the saving grace Maddie was hoping for – it’s more of a demolition job than a fixer-upper, and her sisters will take a lot of convincing to stick around and make a go of the place.

But right when Maddie is at her lowest point, she meets Jax. Town mayor and local heartthrob with a few secrets regarding Phoebe Traeger – he’s also instantly attracted to Maddie and desperate to keep her in Lucky Harbor.

But as much as Jax and Maddie want to stay in the idyllic harbour town, oldest sister Tara is desperate to leave. Tara spent a summer in Lucky Harbor when she was a teenager; it’s the place where she fell in love, made the biggest mistake of her life, and likewise felt the biggest regret.

Ford Walker remembers Tara, and the summer they spent together. He can’t quite believe that she’s back, or that she still feels so hurt over what happened to them all those years ago. . .  but Ford isn’t surprised to discover that they still have spark and longing between them, because some things are forever.

‘Christmas in Lucky Harbor’ is a compilation book of the first two instalments in Jill Shalvis’s ‘Lucky Harbor’ series. ‘Simply Irresistible’ is the first book and concentrates on Maddie’s story, second novel is ‘The Sweetest Thing’ and follows Tara.

I have heard so much about the infamous ‘Lucky Harbor’ series. These are the books that have come most highly recommended to me since the series began in 2010. But it wasn’t until I stumbled across this convenient combo book at one of my favourite Melbourne bookshops, Rendezvous Books that I decided it was high time I travelled to Lucky Harbor, Washington. . .

Jill Shalvis’s ‘Lucky Harbor’ is really the best kind of over-arching contemporary series – it hits all the right notes. There’s a solid setting in Lucky Harbor, Washington, that’s populated with well-meaning busy-bodies, colourful locals and hunky bachelors. But the backbone of the series so far is really the daughters of Phoebe Traeger – all with different fathers who have never had the opportunity for sisterly bonding, until their wayward hippie mother dies and leaves them all with an estate to rebuild. There’s definitely a long-game involved, in that Shalvis sets up future romances in each book – Tara and Ford’s chemistry was palpably mysterious in ‘Simply Irresistible’, and throughout ‘The Sweetest Thing’ youngest wild-child sister Chloe is circling the stoic local cop, Sawyer. The setting, character history and delicious hints all make for a really compelling contemporary series.

Then there’s the fact that Jill Shalvis just writes darn good romances, with flawed but compelling characters. Take, for instance, Maddie and Jax’s romance. It’s a case of attraction at first sight, but both Maddie and Jax come with so much baggage and history that turns their ho-hum idyllic insta-romance into something really fascinating. Maddie has just come out of an abusive relationship, now she’s getting to know her estranged sisters and by extension her absentee mother. Jax, meanwhile, is hiding some family secrets from Maddie that could change everything. Shalvis plays these complications beautifully, which balances their spontaneous romance with real-life hurdles;


His eyes were heavy lidded now and locked on her mouth. Beneath her hands, he was warm and hard with strength, and she tightened her grip. To keep him at arm’s length, she told herself. “You don’t want chemistry with me,” she said. “I have. . . faults.”
“Like you can’t hold your liquor?”
“Ha. And no. I mean. . . ” She searched for something suitably off-putting. “I’m twenty-nine, and I keep a flashlight on me, just in case I need to hold the closet monsters at bay. I can’t let foods touch on my plate, everything has to be in its own quadrant. And my go-to movies is ‘The Sound of Music’. I can sing every song.”
There. Didn’t get more embarrassing than that. But just in case, she added one more. “I can also burp the alphabet. I won an award for it in college, and sometimes when I’m alone, I practice in the mirror.”
“The whole alphabet?”
“Yeah, so it’s for the best that we don’t . . . you know.”
“You’re right. That ‘Sound of Music’ thing is totally a dealbreaker. Thankfully, we have no chemistry at all.”
He was teasing her, but when she met his gaze, he wasn’t smiling. Nope. His eyes were lit with something else entirely, and it wasn’t humour.
And she knew something else, too. She hadn’t scared him off. Not even a little.


Then there’s Tara and Ford. They have as much tangled history as they do combustible chemistry – and for them it’s a war between who they were and what they’ve become, and how old wounds are still healing;


Outside the night was gorgeous, and inside there was this man, also gorgeous. She shook her head and closed her eyes. “How is it that we still feel the pull?”
Ford stepped into her, letting her feel exactly how much he still felt it.
“I mean, it shouldn’t still be here,” Tara whispered against his throat as his arms came around her. “I shouldn’t. . . ”
Ache for you . . .
“Some things just are,” he said softly against her hair. “Day turns to night. The ocean tide drifts in and out. And I want you, Tara. Damn you, but I do. I always have.”


I was really surprised after finishing these first two ‘Lucky Harbor’ books, to discover that the series is currently seven books deep, with #8 and #9 coming in 2013 and 2014. By ‘The Sweetest Thing’ I was really excited for Chloe and Sawyer’s story (so wonderfully teased out in the second book) but I thought this would be a trilogy that ended with the third sister getting her man. So imagine my surprised delight to discover that Shalvis continues this series – with the backbone shifting from a family-based story to a setting-based one. This makes perfect sense, as with each book Lucky Harbor sets down roots in the heart of the reader.

I love this series and now I’m impatiently waiting for books 3—7 to arrive for me to dig into. It took me a long time to finally read this series, but it was well worth the wait and now I’m excited to spend much more time in Lucky Harbor.