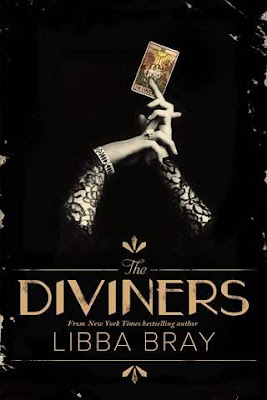 Evie O'Neill has been exiled from her boring old home town and shipped off to the bustling streets of New York City - and she is pos-i-tute-ly thrilled! New York is the city of speak-easies, rent parties, shopping and movie palaces, and soon enough Evie is running with glamorous Ziegfeld girls and rakish pickpockets. The only catch is that Evie has to live with her Uncle Will, curator of the Museum of American Folklore, Superstition, and the Occult - also known as 'The Museum of the Creepy Crawlies'.

When a rash of occult-based murders comes to light, Evie and her uncle are right in the thick of it. Even Evie's new pals - hoofers, numbers runners and activists, but all swell kids - are drawn into the investigation. And through it all, Evie has a secret: a mysterious power that could help catch the killer - if he doesn't catch her first...

Evie O’Neill has gone and done it now. She has always been that girl of her small town in Zenith, Ohio. She’s been that girl since her brother, James, went to war and never came home. She’s been that girl since she realized her parents would never stop missing James and neither would she. Evie is the wild-child – the ones old ladies tut-tut over, mothers tell their daughters to stay away from and boys follow with their eyes. But when Evie uses her unique talent of reading inanimate objects to out a popular young lad for the lout he is – Evie finds herself on the outs with the whole town. Evie’s parents have no choice but to bundle her onto a train and send her to Manhattan, to live with her uncle William Fitzgerald at his Museum of American Folklore, Superstition, and the Occult (affectionately called Museum of the Creepy Crawlies by local New Yorkers).

Evie’s just fine with moving to New York for a stint. She’s seventeen-years-old with a bob of hair and a kick in her step – she’ll be the talk of the town! Except a hustler by the name of Sam Lloyd douses her excitement when he pick-pockets her at Grand Central Station; leaving her with nothing but a smile and stolen kiss.

At least Evie has her old friend, Mabel Rose, to keep her company. Mabel lives with her socialist parents at the Bennington apartment building. Poor Mabel is just nuts over Uncle Will’s assistant, Jericho Jones – an absolute giant of a boy who Evie thinks is dull as ditch water but Mabel’s just a little bit crazy over. Also residing at the Bennington is Theta Knight and her ‘brother’ Henry Bartholomew Dubois IV – Theta is a Ziegfeld girl and Henry plays the tunes for the show, but both of them have stars in their eyes and hopes for the bigger and the better.

All these bright young things are crossing paths and making friends, and there’s a heady sense of possibility twinkling in the New York skylight.

Over in Harlem, seventeen-year-old Memphis Campbell is a numbers-runner for the illegal lottery, which funds his poetry writing. He used to be miracle Memphis who could heal with his hands – until the one person he wanted to save died. Now Memphis lives with his Aunt Octavia and looks out for his little brother, Isaiah. But his brother is special – so special Memphis takes him to Sister Walker to read the cards . . . but lately, Isaiah has been seeing dark things and warns of what’s to come. . .

On the lonely streets a man whistles an eerie tune as he stalks his victims. “Naughty John, Naughty John, does his work with his apron on. Cuts your throat and takes your bones, sells ’em off for a coupla stones.” He calls himself The Beast, and he’s only just begun.

I hate to point out the obvious, but ‘The Diviners’ is simply divine. Here is a clever, creepy and unique new paranormal novel that’s so fascinating and delightful for basing its fears partly in reality and possibility and gives us a cast of bright young things on the fringe of New York’s Jazz Age.

Libba Bray sets the stage perfectly in the opening chapter, involving a Ouija Board at a party with curious flappers and gents who do not know what they unleash on the night. From there we meet our cast of curious cats – starting in Zenith, Ohio with Evie all the way to Harlem, and a Broadway stage right to a beautiful, old occult museum. Each of these characters has secrets and abilities to hide and unfold throughout ‘The Diviners’ – and as an occult serial killer creeps ever closer to the night that Solomon’s Comet will streak across the skyline, each of our characters will cross paths and realize they are not alone in their unusual abilities.


Elsewhere in the country, there were similar stirrings: A mother dreamed of her dead daughter and woke, she could swear, to the chilling sound of the words Mama, I’m home. A Klansman who’d left his meeting in the woods to piss by an old tee jumped suddenly, as if he’d felt hanging feet dragging across the tops of his shoulders, marking him. There was nothing there, but he brushed at his shoulders anyway, scurrying back towards the fire and his brothers in white. A young Ojibway man watched a silvery shimmer of a hawk circle overhead and disappear. In an old farmhouse, a young boy nudged his parents awake. “There’s two girls calling me to play hide-and-seek with them in the cornfields,” he whispered. His father ordered him sleepily back to bed, and when the boy passed by the upstairs window, he saw the incandescent girls in their long skirts and high-necked blouses fading into the edges of corn, crying mournfully, “Come, come play with us. . . ”


The setting of ‘The Diviners’ is brilliant. New York is the perfect stage for this paranormal murder mystery to unfold – and 1926 New York is particularly clever. I've seen a few reviews in which people have suggested that this series is a steampunk one, an alternate history of America. That wasn’t my impression of the novel, although I do think Bray is offering us a more fantastical version of American history. I was just under the impression that 1926 was a small window in history as an age of great opportunity and possibility. The Great War has been over for eight years, The Great Depression is four years away and World War Two is thirteen. This time period of 1926 was a very small window of opportunity in which America could feel optimistic about the future – that they’d survived the war and been victorious – but at the same time were none the wiser about what devastation lays ahead. I mean, that’s why it was called the Roaring Twenties and the Jazz Age – it was a time when many women were granted the right to vote, Russia was moving towards socialism, Sigmund Freud and Albert Einstein were among the great thinkers and music became daring. It was, quite literally, the age of possibility. And supernatural exploration seems to be the most delightful, chillingly-exciting “what if?” of this modern age.

New York really is a stand-out in this novel – and it’s quite clear that this is Libba Bray’s hometown. As much as she casts a sinister shadow on street corners with Naughty John, Bray also shows her big love for the city that never sleeps through Evie’s fresh eyes. I’m actually visiting New York for the first time next year, and I felt a lovely little thrill down my spine when Evie describes stepping out into the city and taking it all in;

She craned her neck to take in the full view. Far above the busy streets, men balanced daringly on beams of steel, erecting new buildings like the ones whose tops already pierced the clouds, as if even the sky couldn’t hold back the ambition of their spires. A sleek dirigible sailed past, a smear of silver in the blue. It was like a dreamscape that could change in the blink of an eye.


I do believe ‘The Diviners’ is intended as a trilogy (and I should note that movie rights have already been sold to Paramount Pictures!). It is certainly set on an epic scale, if the 578-pages weren’t enough to tip you off along with the strong ensemble cast. Libba Bray makes sure to leave plenty of breadcrumbs in this novel, pointing towards a larger arching story set in this alternate America universe. So while the mystery of Naughty John the occult killer is a delicious one (which scared the bejesus out of me!) I was also vastly interested in the clues Bray peppers throughout, indicating what’s in store for Evie, Jericho, Sam, Mabel, Theta, Memphis and Henry;

The music had stopped. The record hissed with a few seconds of silence, and then a man on the record began talking. “Been able to see the dead all my life,” he drawled. “Some of ’em just wants peace and rest. Not all of ’em, though. Not by a long shot. There’s evil in this world, evil in the hearts of men, evil that live on –” Evie scraped the needle across the record and ran from the room without turning out the lights.


Libba Bray’s ‘The Diviners’ has been a hot book from the moment film rights were bought before it even hit shelves. Bray’s impressive track record as the Printz-winning author of ‘Going Bovine’, along with her bestselling ‘Gemma Doyle’ debut series was sure to entice fans both new and old. But Libbra Bray really outdoes herself with ‘The Diviners’. This mammoth book is spectacularly creepy with a large cast of characters who have twisting stories and cutting secrets – that this is a supernatural series set in the Roaring Twenties is particularly delicious for the heady sense of possibility and starry-eyed hope that fills the character’s hearts and tints the air alongside investigations into death and never letting go. This is a favourite book of 2012 and it has certainly set the bar very high for all other paranormal YA from here on in.