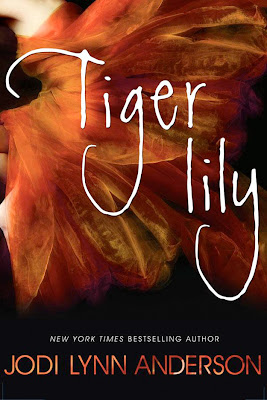 Before Peter Pan belonged to Wendy, he belonged to the girl with the crow feather in her hair. . . .

Fifteen-year-old Tiger Lily doesn't believe in love stories or happy endings. Then she meets the alluring teenage Peter Pan in the forbidden woods of Neverland and immediately falls under his spell.

Peter is unlike anyone she's ever known. Impetuous and brave, he both scares and enthralls her. As the leader of the Lost Boys, the most fearsome of Neverland's inhabitants, Peter is an unthinkable match for Tiger Lily. Soon, she is risking everything—her family, her future—to be with him. When she is faced with marriage to a terrible man in her own tribe, she must choose between the life she's always known and running away to an uncertain future with Peter.

With enemies threatening to tear them apart, the lovers seem doomed. But it's the arrival of Wendy Darling, an English girl who's everything Tiger Lily is not, that leads Tiger Lily to discover that the most dangerous enemies can live inside even the most loyal and loving heart.

Neverland is a dangerous place, tucked away in the farthest corners of the world and home to some of the most dangerous creatures … there are rules and order amidst the chaos of Neverland. Captain Hook’s pirates promise not to bother the indigenous Sky Eaters tribe so long as they likewise promise no violence against the pirates. And the pirates, in turn, are known to always be on the hunt for the Lost Boys and their leader, forever-young Peter Pan. Likewise, everyone on the island knows that the Lost Boys will just as soon kill you as look at you – and Peter Pan has no mercy.

Young Tiger Lily, of the Sky Eaters, is at once constrained and reliant on the orders of Neverland and her tribe. On the one hand, tribe is family, and that means a lot to Tiger Lily who was found abandoned as a baby, hidden underneath the flower of her name … found by medicine man, Tik Tok, who took her in and raised her as his own daughter. Tiger Lily has grown up trying to adhere to the rules of her tribe. The rules that say she shouldn’t go swimming with her best friend, the boy Pine Sap, and she shouldn’t hit his cruel mother upside the head when she degrades and belittles him. Rules that say she should enjoy weaving and shucking and other activities that require her to stay still and chat with the other women of the tribe. And the rules that say she should not help a stranded Englishman when his ship his torn apart by the rocks, and he the only survivor … resulting in a new rule that says Tiger Lily must marry the oafish man, Giant, by the end of the season or else be thrown out of the tribe.

While trying to bow down to the latest round of rules that has Tiger Lily’s wild heart thumping and skin itching, she takes to the forest … only to run into Peter Pan, who introduces her to the Lost Boys, a taste of love and a whole new set of rules to break.

The faerie, Tinkerbell, is narrator in Anderson’s wickedly beautiful tale, and early on she warns readers that; “This is a love story, but not like you’ve heard.” So begins a tale which at once flips Barrie’s story on its head and adds delicious layers to Neverland and the boy who never grew up, Peter Pan.

Tink is explained as a rather ingenious narrator, a perpetually curious faerie who witnessed Tiger Lily’s tormented childhood in the tribe of Sky Eaters … tormented, that is, until she found a sure-fire way to stop other children from teasing her hurting her. Tink was enamoured with Tiger Lily from the first, and has taken it upon herself to be the girl’s perpetual companion, whether she knows it or not. Tink watches over Tiger Lily as she hunts, tries to find her place among the tribe’s women, is tormented by her future mother-in-law, eventually breaks the rules by rescuing a stranded Englishman and then risks it all by falling in love with Peter Pan.

But it’s when Tiger Lily, and Tink, meet Peter that the story really takes flight – and Tiger Lily is torn between what she knows and loves, and the secrets of her heart that only Peter seems to ignite. Likewise, while Tinkerbell cares deeply for Tiger Lily and is forever fascinated by her, it’s Peter who owns her little faerie heart;

A faerie heart is different from a human heart. Human hearts are elastic. They have room for all sorts of passions, and they can break and heal and love again and again. Faerie hearts are evolutionarily less sophisticated. They are small and hard, like tiny grains of sand. Our hearts are too small to love more than one person in a lifetime. Aside from rare instances, like in the case of my father, we are built to mate for life. I went back to the burrow many nights, and watched Peter. I tried to talk sense in to my hard little heart. But it had landed on Peter, a creature two hundred times my size and barely aware of me, and there was no prying it loose.


Anderson’s tale is so beautifully woven, with small intricacies and lovely odes to Barrie’s original story. Take, for instance, her describing the suspended time in Neverland – where people don’t grow old. Anderson explains that age is just another aspect of people on the island, like hair-colour or eye-colour. It’s rumoured that people stop growing after a momentous moment in their lives, so Tiger Lily’s guardian, the medicine man Tik Tok seemed to stop aging once he discovered Tiger Lily and took her in as his own. The Lost Boys also care for a baby (called simply ‘baby’), which they discovered, and who appears to have stunted growth as an infant since being taken in by the Boys. Likewise, Tiger Lily’s future husband, Giant, is in his 40’s and seemed to stop aging after the death of his brother. It’s these little tid-bits that Anderson adds as delicious flourishes to an already endearing tale.

Likewise, she has improved some aspects of Barrie’s story. Her background story for Captain Hook is pure, Dickensian, genius. One drunken night, Hook confesses to first-mate (and psychopathic killer) Smee, that he never lost his hand to Peter Pan in a sword fight – the truth is, he once worked on a shoe assembly line, in London. He was paying his way through school, until one day he wasn’t paying attention and his hand got caught in the machine. It’s truly wonderful that Anderson brings a rather Dickensian theme to Hook’s story, suggesting that he left industrialized London in search of a land that’s closer to nature and promised an intangible fountain of youth.

Anderson also brings in themes of colonialism and examines Puritan ideals with the story of an Englishman bought into the Sky Eaters. It’s only when this man enters the village, and starts teaching them about his God and the way one should live so as to get into heaven that things start to go awry for the tribe. Take, for instance, Tik Tok, who dresses in women’s clothing but is a man – his tribe simply accept that he was born to both and that’s the way it is. But the God-fearing Englishman sees things differently, and his distaste starts to influence the rest of the tribe. This was a case of Anderson bringing a touch of harsh reality and historic context to Barrie’s story, and it definitely resonates in a powerful way.

Peter is also painted in far more complex layers. He’s at once a selfish and brattish young man, with a big heart for his lost boys, but no tolerance for Tiger Lily’s competitive streak (which often beats out Peter’s stubbornness). He’s quite a conundrum in this book, where he boasts of his prowess with women, but seems entirely fascinated by Tiger Lily and her duelling femininity and Tom Boyish behaviour. Peter is made all the more fascinating for being an imperfect character, as both Tiger Lily and Tinkerbell accept about him. But it’s also that he shows them his soft side, what he fears and what he regrets in his life, it all goes a long way to painting a rather fascinating picture of the infamous boy who never grew up;


Peter sighed into the water, and his breath sent a small circle of it into tiny ripples. “It seems cowardly, getting old. Don’t you think?”

She rolled onto her side to look at him, pillowing her ear with her right arm, and letting her fingers dangle in the water beyond her head. “How is it cowardly?”

Peter kept his eyes on his reflection. “You just curl up around yourself, and sit by the fire, and try to be comfortable. When you get old, you just get smaller inside, and you try not to pay attention to anything but your blankets and your food and your bed.”

“Being comfortable isn’t a bad thing.”

Peter shrugged and turned his head to look at her as if it was a matter of fact. “Of course it is. Old people lock out all the scary, wild things. It’s like they don’t exist.”


Tinkerbell is recounting Tiger Lily and Peter’s love story with a sense of catharsis and awe. You see, Tinkerbell mentions many a time that her faerie father left her and her mother for a nymph he now lives with, and Tink hasn’t seen him since (though she keeps her eyes peeled for him, out of habit). This might go some way to understanding why Tink feels no jealousy about Peter’s love for Tiger Lily – she seems to be searching for a real love story, as proof against her father’s abandonment (which just goes to show – even Anderson’s Tinkerbell is given a more well-rounded character arc!).

Wendy does appear towards the end of this book, but her presence really just goes to show how she pales in comparison to the fiery and fascinating Tiger Lily, as a character. Definitely, after reading Anderson’s fuller reimagining, you’ll wonder why anyone ever thought that pale, gown-clad Wendy was the heroine to Peter’s hero in Barrie’s story. She doesn’t hold a candle to the vicious Tiger Lily.

Jodi Lynn Anderson’s book is beautiful and haunting; at once a rich character examination, but still with the flights of fantasy readers love about J.M. Barrie’s original. This is a favourite book of 2012 for me; from Anderson’s lush writing, to her piercing characterizations and highly original reimagining of a much-loved classic, this is one book that will never get old.

Email ThisBlogThis!Share to TwitterShare to FacebookShare to Pinterest
Labels: Jodi Lynn Anderson, YA