‘Alex As Well’ by Alyssa Brugman 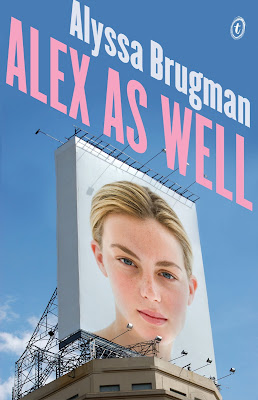 What do you do when everybody says you’re someone you’re not?

Her mother is not happy, in fact she’s imploding. Her dad walked out.

Alex has turned vegetarian, ditched one school, enrolled in another, thrown out her clothes. And created a new identity. An identity that changes her world.

And Alex—the other Alex—has a lot to say about it.

Alex has never liked herself. She didn’t like herself in kinder, so she pushed the other kids down. She hated herself at that boy’s school, especially after the incident. And she hates who she is at home – having to follow mum and dad’s rules, taking their damn pills.

So maybe it’s time for Alex to change herself, by being herself.

Alex has never felt like herself because she’s always been told that she’s a boy. But she doesn’t look like a boy, and she doesn’t feel like a boy. But all that’s about to change, because she’s going to give herself permission to be exactly who she’s always wanted to be. She’ll start by attending a new school where she gets to wear a twirling skirt. She’ll visit the Clinique counter and come away looking like a Clinique girl. She’ll make girl friends at school; maybe even enter the catwalk fashion show. And she’ll pay a visit to one Mr. Crockett, to see about getting her birth certificate changed. She’ll flirt with a boy called Ty, make friends with girls called Sierra and Julia and fantasize about a beautiful girl called Amina.

No more medication. No more boy’s school. Maybe even no more parents . . . it’s time for the real Alex to have her turn.

I became interested in this book when the blurb promised a story “questioning identity” and “discovering sexuality” – coupled with that gorgeous androgynous cover, I knew Alyssa Brugman’s book was going to touch on some big issues not often explored in Australia YA, and I knew I had to read it. Brugman didn’t disappoint – ‘Alex As Well’ is a smart, moving and confronting portrayal of a transgendered girl trapped in a boy’s body.

What will suckerpunch readers right from the first page is how strong a voice Alex has. Much of the time she’s speaking directly to the reader, sharing intimate details of her wrecked home life and constant conversations she has with the other ‘Alex’, reasoning with him or trying to quell his voice in her head. She speaks casually to the reader, inviting us into the story as a silent observer, so you’ll get some great rhetoric like this:

We’re just one person. Did you get that already? You guess it from the blurb, right? I put in some clues.


Alex and I are the one person, but I feel like two people, and this is the problem. It’s always been like that, but since I stopped taking my medication five days ago it’s so totally clear that I can’t be the other Alex anymore.
And what’s why my dad left us.
Me.

This intimate voice draws us in to Alex right away, from the get-go we’re on her side. It helps that she’s got wit and snark in spades and tries to see the world with blinding optimism, despite her struggles. But this intimacy also means we get first-hand understanding of what Alex goes through everyday – her internal struggles with the two sides of Alex, and other people’s reactions to her.

Putting yourself into the shoes of a transgendered youth is no mean feat, but Brugman accomplishes the seemingly impossible. She does so by peppering Alex’s narrative with memories of her youth, particularly her parents’ conditioning and sexuality prompts (father encouraged wrestling, boy’s toys were bought and open discussion about Alex’s ‘noodle’ which didn’t look like other boys private parts, but was normal nonetheless). We also read other people’s responses to Alex – back when she was a boy, and her fellow male pupils were clearly confused and angered by her. This, in particular, is something I never thought about with explorations of transgendered youth, but Alex discuses it openly and at length. This idea that so much of who we are is dictated by other people, simply because they’re uncomfortable with the unknown. It’s beautifully articulated in this passage:

Why does it matter whether I am a boy or a girl?


But it does. It really, really matters. People want to know which one you are. They want to be able to decide what you are, even when they are just walking past on the street and will never see you again. It’s crazy. Most people don’t see it as a grey area. They are physically affected when there is confusion.
They are repulsed.
For me it’s a very grey area. Greyitty grey. We are the Earl and Countess of Grey, Alex and I.

While ‘Alex As Well’ is narrated by Alex, there are short asides on the website forum of Motherhood Shared, where Alex’s mum goes to vent about her son’s changing attitude and the sudden appearance of a very feminine Alex. Here we learn more about Alex’s ‘condition’ and medical history than even she knows. But the excerpts narrated, essentially, by Alex’s mum in her forum-like diary are critical and fascinating. It is here that the ‘greyitty grey’ emerges, and readers will begin to realize that Alex may very well be an unreliable narrator . . .  or perhaps a not entirely self-aware one.

True, Alex’s parents handle her transition abysmally, but for all the right reasons. Initially readers may side entirely with Alex, but through Brugman’s clever narration we’ll slowly start to put ourselves in her parent’s shoes and realize the reasons that they fear Alex’s changing sexuality.

In a few of my recent book reviews I've been harking on this issue of LGBTQI young adult literature, or the lack thereof. I've become very aware of how little is out there for the young lesbian, gay, bisexual, and transgender community because of brilliantly insightful blog posts like this one. Such posts make a really good point, and it’s all there in the title – ‘the invisible minority’. Because even a cursory glance at the current crop of popular YA books will alert you to the fact that they’re all pretty homogenous, particularly in their ‘boy meets girl’ tropes. Forget ‘girl meets girl’ or ‘boy meets girl’, let alone the complicated examinations of Brugman’s novel, which is more ‘boy is actually a girl who is also attracted to other girls’.

But why is it important that the young LGBTQI community are represented in young adult literature? Well it’s what I always talk about with young adult books – that they’re meant to be holding a mirror up and reflecting society. Young adult literature is about making connections for young readers who find a little of themselves in these stories and take comfort from reading characters go through similar hardships and survive all the stronger for it. This is perhaps especially important for LGBTQI youth, who already have a hard enough time finding themselves represented in other aspects of society and media –  last year the Australian senate voted down a same-sex marriage bill, and afterwards a Liberal senator called Cory Bernardi equated same-sex marriage to bestiality. Already this year a (now former) candidate for Bob Katter's Australian Party likened homosexuals to pedophiles and said they shouldn't be allowed to work in kindergartens. Wow, huh? What a great message to send to the LGBTQI youth community, who are already struggling with admitting their sexuality to friends and family let alone thinking about going into adulthood without the same rights as heterosexual couples. How many movies came out this year with LGBTQI characters? I really love the Mackelmore and Ryan Lewis song ‘Same Love’, especially for this telling lyric: “If I was gay I would think hip-hop hates me”.