'The Girl in the Hard Hat' by Loretta Hill 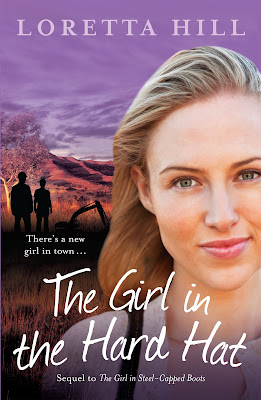 Wendy Hopkins arrives in the Pilbara to search for the father who abandoned her at birth.

Getting mixed up in construction site politics at the Iron Ore wharf just out of town was not high on her ‘to do' list.

But when she takes a job as their new Safety Manager she becomes the most hated person in the area. Nicknamed ‘The Sergeant', she is the butt of every joke and the prime target of notorious womanizer, Gavin Jones.

Giving up is not an option, though.

For, as it turns out, only Wendy can save these workers from the impending cyclone, find a man who wants to stay buried and ... put a bad boy firmly in his place.


This review is part of 'The Girl in The Hard Hat' blog tour.


Check out the review that came before, from Book Muster Down Under
... and the one that's coming after, via Funkenwagel!


Wendy Hopkins hasn’t worked in two years. Her first year of leave she was backpacking around Europe, trying to forget an accident that cost a man his life and would have ended her career. The second year she discovered that her life was a lie, her father was not her father and her entire family had kept the secret from her all this time.

Wendy has been searching for the mystery man that is her father, but her family have closed ranks and insist they don’t want her stirring up old history. For one year she has obsessed over finding this man, but now she has to admit to herself that she may have reached the final dead-end and now she needs to start making money again, get her life back on track.


How many more shocks were around the corner?

She couldn’t relax. All she wanted now was the truth, so that her world could never again be ripped out from under her like it had that day on the phone.So she put her whole life on hold.

For six months she’d searched for the drifter who was her father – driving from town to town in northern Australia. She was no more at home on the road than she was anywhere else. But dark-haired Hector, the welder, with two toes missing on his right foot, a taste for red dust on his boots, and a bag on his back, seemed more like an Aussie myth than a miner with a daughter he’d never met.


When she bumps into her uncle, Mike, in Karratha and he (reluctantly) says he can get her a job working on the Pilbara – one of the longest jetty open-sea wharves in the world – she happily takes him up on the offer. Before getting waylaid by a guilty conscience and then the hunt for her father, Wendy was a qualified Safety Manager, and she looks forward to working again on this colossal project.

Except uncle Mike failed to mention he was using blackmail to get Wendy her job, and the man he was blackmailing, Dan ‘Bulldog’ Hullog doesn’t have a job for her . . . but he does have an assistant position opened up at Barnes Inc, where there are 350 men and five women currently stationed in the Donga town.

The Pilbara job is unlike anything Wendy has ever seen. Set on a majestic landscape where the red-dust outback meets the sea, there are massive pile-drivers constantly at work, and cranes dot the horizon. But this is also a project that is woefully behind on health and safety – partly because the current Safety Manager is a bumbling alcoholic. Within 48 hours of being on site, Wendy gets the old manager fired and slots into the position herself – something which does not endear her to the rest of the crew.

But one man who doesn’t mind this feisty blonde who has come to shake things up is Gavin Jones. Resident Pilbara Lothario, Gavin’s last attempted flirtation ended disastrously, but once he lays eyes on Wendy he immediately wants her – so much so that he steals a kiss and receives a punch for his efforts.

Wendy can see right through Gavin’s love em’ and leave em’ mentality, but that doesn’t stop her from lusting after the heartbreaker. But Gavin runs hot and cold – wanting her one minute and then convincing her to stay away from him. Because Gavin is bad news with a history that’s plaguing him, and he doesn’t want Wendy getting caught up in his nightmare.

A storm is brewing in the Pilbara – it’s cyclone season and the weather is as unpredictable as love.

‘The Girl in the Hard Hat’ is the second contemporary Australian romance from Loretta Hill, a follow-up to her 2012 book ‘The Girl in Steel-Capped Boots’ (which made my favourites list!).

The second I heard that Loretta Hill had a second book in store; I couldn’t wait to return to the Pilbara. I loved Hill’s first book, which threw ‘Madame Engineer’, Lena Todd, into the male-dominated construction site and had her falling for the client, Dan Hullog. I loved that Hill was writing a romance in which the women stuck out like sore thumbs – where they were outnumbered 350:5 and had to show their mettle against misogyny and sexism. Certainly, a sea wharf construction site is not your typical romance setting – and Hill excels as much in throwing readers into the deep-end of this setting as she does her female characters.

But I was particularly eager to get back to Pilbara because of the characters Hill introduced in ‘Steel-Capped Boots’. She wrote a cast of infectiously delightful characters who I really came to know and love while reading, so I couldn’t wait to catch up with them again; workers Fish and Radar, profanity-happy manager Carl who had a crush on bus-driver Sharon. Dan ‘Bulldog’ Hullog, the despised client with a heart of gold. Even grumpy man Mike, out to make everyone miserable. And, of course, flirtatious pretty-boy Gavin Jones, who pursued Lena Todd so hard in her book. I’m thrilled that Gavin is the hero of Wendy’s story – because even through his heavy-handed flirting with Lena, you could tell there was more to this guy than a quick smile and easy promise, and Hill picks him apart beautifully in ‘The Girl in the Hard Hat’. If I had any complaints about this second book, it’s probably that I thought Gavin’s back-story was a wee bit over-the-top and nearly strayed into soap-opera territory, but I loved him regardless.

The secondary characters really are given starring roles in this sequel – something I thoroughly appreciated. They’re not merely side-lined; they’re actually given fairly meaty minor stories that continue their development. For new couple Lena and Dan, there’s a wrench thrown into their relationship when Dan’s ex-fiancée, Annabelle, comes flouncing into town hoping to reconcile with her ex, much to Lena’s worry and chagrin. Carl and Sharon, likewise rocking along in a comfortable new romance, are more in love than ever and taking baby-steps in their relationship. There’s also a new character introduced, HR man ‘Chub’ – who calls Wendy ‘little mate’ and she replies in kind with ‘cobber’. I loved Chub; he’s a funny, food-loving sweetheart and one of Wendy’s first allies on the male-dominated site.

Wendy is another great heroine, who perseveres and proves her tenacity in the face of on-site pranks and her own crumbling world. She certainly has a lot on her plate – between preparing the Pilbara site for cyclone season, searching for her missing father and keeping her lust for Gavin Jones under control. There is a lot happening in Wendy’s world, and while she does have (totally justified!) mini-breakdowns trying to cope with everything, I loved how hard-headed she was and determined to get on with the job and her life.

The romance in this second novel is scrumptious; and another great aspect to Hill’s series, that on this construction site covered in red dust, where everyone wears reflector vests and have only their container-like Dongas for privacy, that some characters can get so hot n' heavy and turn this decidedly un-romantic setting into a sensuous delight. Gavin and Wendy are a great odd-couple, and I loved their push-and-pull.

Loretta Hill’s follow-up is as fantastic as her first contemporary Aussie romance. I once again revelled in the unusual, male-dominated outback setting and the fascinating, insular life of the Pilbara construction site. The romance is another winner, when both Wendy and Gavin have complicated pasts and haunting secrets. I really, really, really hope this isn’t the last time we visit the Pilbara. I loved catching up with the likes of Carl, Sharon, Lena and Dan – and now I'd like to return again and read how Wendy and Gavin are getting on, and maybe meet some new Pilbara crew. In the meantime, I’m also keen to read Hill’s upcoming novella ‘One Little White Lie’, coming this February. 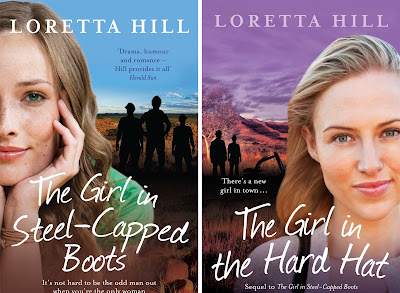 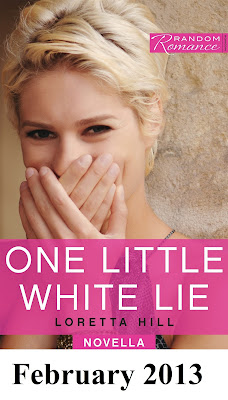