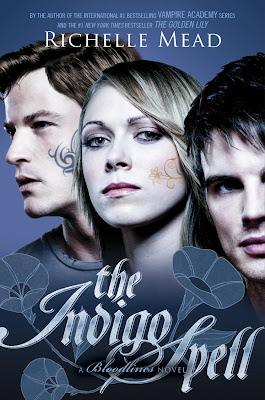 Sydney Sage is an Alchemist, one of a group of humans who dabble in magic and serve to bridge the worlds of humans and vampires. They protect vampire secrets - and human lives.

In the aftermath of a forbidden moment that rocked Sydney to her core, she struggles to draw the line between her Alchemist teachings and what her heart is urging her to do. Then she finally tracks down the elusive, enigmatic Marcus Finch – a former Alchemist who the organisation denies exists, and who lives in shadows, on the run. With Marcus's help, Sydney realises that the group she's been loyal to her whole life has been hiding the truth from her. Is it possible that her golden lily tattoo might have more power over her than she thinks?

As she struggles to come to terms with what that might mean, Sydney is compelled to use her growing magical powers to track down an evil magic user who is targeting powerful young witches. Using magic goes against everything she always thought she believed, but she realises that her only hope is to embrace her special blood – or else she might be next.

Forging her own way is harder than Sydney ever dreamed. Maybe by turning off her brain – and following her heart – she'll be able to finally figure out where she belongs.

I have not been the biggest fan of this series. I was decidedly “meh” about the first book, and then ‘The Golden Lily’ pulled an abysmal two-star rating from me (the lowest rating of any Richelle Mead book I've ever read!). So when I went into this third book, I was competing against past disappointments and reading prejudices. Furthermore, ‘Indigo Spell’ is being released amidst much hype about the movie adaptation of Mead’s highly-popular ‘Vampire Academy’ series – so I've been thinking about how great those books were, what a kick-butt protagonist Rose was and how my love of that series will be reignited with this movie.

So, know that it is no small feat that with all that baggage working against ‘The Indigo Spell’. . . I come away from this third book with a smile on my face and a feeling that this series has been reinvigorated. And I say for the first time, that I am on-board with the ‘Bloodlines’ series. Hallelujah. Amen. Praise! And on with the review. . .

First off – the mystery at the heart of this book is superb. Alchemist Sydney Sage has been tutored in magic by her teacher, Ms. Terwilliger since she arrived at the boarding school. But when ‘Indigo Spell’ begins, Terwilliger has an odd request to make of Sydney – namely that she helps find her sister, Veronica, before she hurts any more magical young women. You see, while Veronica is ten years older than Ms Terwilliger, she looks decades younger because she has been draining young women of their magic and youth – leaving them human husks. And – Sydney being an attractive, young magic-user – she is also potentially in danger. I loved this mystery storyline, it had echoes of Elizabeth Báthory but more than anything it was a well-paced mystery and great ‘whodunit’. With both ‘Bloodlines’ and ‘The Golden Lily’, I feel like I could only recount vague details of the ‘mystery’ plots woven throughout those books – but the hunt for Terwilliger’s sister was written on solid ground, kept me guessing and most importantly advanced Sydney’s story and further complicated her Alchemist life by immersing her deeper into forbidden magic territory. Brilliant!

I also enjoyed another mystery plot that runs concurrent to Terwilliger's sister - and that concerns a rogue called Marcus Finch. I will give nothing away - save to say, this was another intrigue that adds layers and complications to Sydney's life and I think will prove a ticking time-bomb in the future. But, my lips are sealed.

Now, Adrian has always worked for me as a character – I never really had complaints about him, per se, in either ‘Bloodlines’ or ‘The Golden Lily’ (he even moped amusingly). What didn’t work for me was his sudden romantic interest (and then love!) for the decidedly dull Sydney Sage. I just did not get it – especially when Mead indicated timeline by saying Adrian and Rose had only been over for three months when he moved from ‘depression’ to new ‘obsession’ with Sydney.

With that in mind . . . the Sydney/Adrian romance clicked for me in ‘Indigo Spell’. In the previous two books, it kinda felt like an arranged marriage – Adrian had to be the hero of any VA spin-off, so he was just gonna wind up with whichever female protagonist Mead chose to write about anyway . . . and for two books Sydney/Adrian felt forced. But I finally *get* them in this book – it just became clear to me that with Sydney, Adrian has someone to protect and she needs him. I never felt like Rose needed him – sure, he was fun and cute, but for the serious life-and-death stuff she was either self-reliant, or running to Dimitri. Adrian was never anyone’s first choice for help . . . until Sydney. I get it now.

I also like that Adrian at least addresses his sudden switcheroo from Rose to Sydney. And, in typical Adrian fashion, he brings the snark and wit to his romantic declaration;


“Nothing will get you anywhere with me,” I exclaimed.

“I don’t know about that.” He put on an introspective look that was both unexpected and intriguing. “You’re not as much of a lost cause as she was. I mean, with her, I had to overcome her deep, epic love with a Russian warlord. You and I just have to overcome hundred of years’ worth of deeply ingrained prejudice and taboo between our two races. Easy.”


Adrian feels more like Adrian in ‘Indigo Spell’. I can’t quite put my finger on it – and maybe it is down to him being in ‘romantic’ mode once again, but he seemed to bring the zingers in this book. I appreciated this quite a bit;


Adrian shook his head, still smiling. “I've said over and over, I'd do anything for you. I just keep hoping it’ll be something like, ‘Adrian, let’s go hot tubbing’ or ‘Adrian, take me out for fondue.’”

“Well, sometimes we have to–did you just say fondue?” Sometimes it was impossible to follow Adrian’s train of thought. “Why in the world would I ever say that?”


I will also say that for the first time, I have finished a ‘Bloodlines’ book excited for the next one. The ending is good, and that’s all I’m saying.

Now, just because I've got stuff to gush about, doesn’t mean the ‘Bloodlines’ series is magically perfect. No. Complaints I've had since book #1 still abound.

Jill. Jill, Jill, Jill, Jill, Jill. Ohhhhh . . .  how I hate the girl (which is the only way I know she’s related to Lissa – that I hate them both fairly equally must mean they share DNA). Can I just say; when rumours of a VA spin-off first whispered across the internet, I was rather excited by everyone speculating that Jill would be our new protagonist. I thought she would be a rather great new narrator because, in theory, Jill is an interesting character with plenty of potential. She’s the love-child of a deceased monarch, half-sister to the reigning queen and at the centre of a potential political assassination. She could have been a pretty great narrator with an impressive story arc. In reality; she is God-awful.

So far, Jill’s storyline in the previous two books has centred on a wacky love-triangle and ambitions to become a catalogue model. Erm – are you serious?! What I really crave for Jill is a confrontation with Lissa – I want them to address the fact that Eric Dragomir cheated on Lissa’s mother, resulting in Jill and thereby wrecking her rose-tinted memories of their happy marriage (never mind that it’s a double-edged sword, since Jill’s existence allows Lissa to be queen). But Sydney frequently shuttles this elephant-in-the-room under the carpet by saying it’s too dangerous for Jill and Lissa to meet, Lissa hasn’t reached out to her – yadda, yadda, yadda. Excuses, excuses, excuses. Instead, Mead has given Jill a storyline based around a new love triangle (groan!) between herself, Eddie and Angeline. This is a plot point even Sydney admits sounds like a Shakespearean comedy – what it is, is a farcical failure – and all their scenes end up feeling a little ‘Sweet Valley High’ because they deviate so far from the vampire-world and just read like eye-rolling teen melodrama.

Though I’m loathe to see Lissa return, I think her presence is needed to make a richer character out of Jill. Even if it’s just a meeting between the two of them that entails Lissa making her dislike of Jill known, and saying that she’s a means to her throne and nothing more (I can totally picture Lissa saying this, because in my mind she has always been villain-adjacent) – at least that would be a launching pad for an interesting character development for Jill. If there’s two more books in the ‘Bloodlines’ series, then something has seriously got to be done with this character – especially when her very existence is the central reason for the ‘Bloodlines’ spin-off series!

Overall though; put me on the ‘Bloodlines’ bandwagon, cause ‘Indigo Spell’ managed to hook me when the first two books in this spin-off couldn’t do it. Nothing is perfect, but I feel like Richelle Mead is finding a great balance now in merging the old with the new – I’m excited for where the story is heading, but I’m thrilled that the old Adrian is back. ‘The Indigo Spell’ is a book of thrilling, heart-palpitating, swoon-worthy magic.