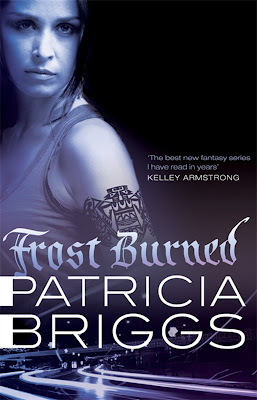 Shapeshifter Mercy Thompson's life is calming down, at least enough that she can focus on mundane matters like Black Friday sales. But on her return, Mercy is unable to contact her mate, Alpha Adam Hauptman, or the other members of their pack. All she knows is that Adam is angry and in pain.

With the werewolves fighting a political battle to gain acceptance from the public, Mercy fears Adam's disappearance may be related - and that he and the pack are in serious danger. Outclassed and on her own, Mercy may be forced to seek assistance from the most unlikely of allies: the vampire seethe.

Coyotes are known for their luck – or, at least, one coyote is known for her luck. But when Mercy finds herself in a car accident with her step-daughter Jesse, she does not understand the full weight of her good fortune . . . until she returns home to find her pack and her husband missing, and signs of a bloody struggle at her friend’s, Kyle and Warren’s, house.

One werewolf remains; Ben is in a bad state, having been tranquilized with silver, he is ranting about federal agents coming in and escorting the entire pack away with lies and badges.

With the recent dire political climate stirred up between the humans and fae, Mercy has few people she can turn to for help – but when her digging uncovers an assassination plot that could shake the tentative human-werewolf alliance to its very core, she knows she will have to do everything in her power to get her mate and pack back, and out of harm’s way.

In the opening chapter of ‘Frost Burned’, Mercy is in a head-on collision after Jesse casually enquires over the possibility of her and Adam having a baby together. Perhaps this is Brigg’s subtle way of telling fans that they can’t look too far into the future (without dire consequences). But more likely it’s just a really great way to kick off the high-octane thrill-ride that is ‘Frost Burned’. Though, honestly, it was a good question Jesse asked – because since their mating/marriage, Mercy and Adam have been going on at a steady romantic trot and keeping fans swooning over them. We last saw the pair in 2011 book ‘River Marked’; that sixth instalment had a deliberately depleted cast, and followed Mercy and Adam on their (somewhat disastrous) honeymoon wherein they were the real focus of the book. So it may come as a shock to fans that ‘Frost Burned’ kicks off as a polar-opposite to ‘River Marked’, wherein Adam has been kidnapped and Mercy is left to her own devices to try and find him.

But, fans should not despair – Mercy and Adam are not completely separated. There is the mate-bond, and two chapters from Adam’s POV (the first ever in the series) – both of which work to show readers how far Adam and Mercy have come in their relationship; how strong they are together, even when apart. While some fans may despair that a physically separated Adam and Mercy will mean none of the lovey-dovey stuff we’ve come to anticipate from them – the romance is actually still here, tenfold even, because we clearly see how much Mercy and Adam have grown from loving each other. We see Mercy tap into a strength (and anger) that we haven’t seen from her since the awful events of ‘Iron Kissed’.


Get Ben to Samuel, who could treat what was wrong with him.

Find whoever had taken my mate and get him back.

Adam’s pain was a roar in my heart, and I was going to make everyone who hurt him pay and pay.It was like triage. Decision one – preserve those who were safe. Decision two – retrieve the rest. Decision three – make the ones who took them regret it.


And since this book seems to have a theme of ‘two sides of the same coin’, it’s fitting that in ‘Frost Burned’, Mercy is also forced to confront and remember the events of ‘Iron Kissed’ and her rape. Briggs has never let those memories get too far away from Mercy, which is commendable for being so brutally honest – but in ‘Frost Burned’ it is definitely bought back as a solid reminder to Mercy, and readers, that there is no such thing as ‘getting better’ or ‘getting over it’ – which is a bold statement that I’m glad Briggs makes, again and again.

Readers would know going into ‘Frost Burned’ that this would be a game-changing book, if only because events in Briggs’s spin-off series, ‘Alpha and Omega’, precipitated revolution. In third book ‘Fair Game’, the human justice system all but turned its back on the Fae population – who have retreated into their own world and are still regrouping and thinking on their next move, when ‘Frost Burned’ begins. Readers should know going into this book, that the human/Fae/werewolf worlds are in a great state of flux; while the vampires are trying to keep their existence hidden (and for good reason – they want to see how things turn out between the Fae and humans first!). Ever since Briggs started her ‘Alpha and Omega’ series, and made a central character out of the Marrok’s son and right-hand-man, Charles, her urban fantasy world has been getting ever more complex. Through Charles, Anna and Bran in ‘Alpha and Omega’, Briggs has made us privy to the political goings-on of the supernatural world. Indeed, in ‘Frost Burned’ while the ‘Alpha and Omega’ trio don’t make an appearance, their offside activities with the Fae are mentioned and set up a very intriguing foundation for the TBD 4th book. . . but with the events of ‘Frost Burned’, Briggs effectively expands the ‘Mercy Thompson’ world beyond the Tri-Cities and ensures this series has room for expansion and a foot in the more political supernatural activities.

I was pretty much in awe of Briggs throughout this book. She has managed to write a cunning mystery, interspersed with political thriller and supernatural noir – all rolled into one, and with hefty doses of romance thrown in for good measure. She brings out some old favourite characters who haven’t made lengthy appearances in a while – Stefan, Ben and Zee among them – as Mercy pools all of her resources and rings in every favour owed to her. And while Bran, Charles or Anna don’t make an appearance from the ‘Alpha and Omega’ world, one secondary character does stroll into ‘Frost Burned’ and I was thrilled to pieces to read about him (especially for his exchanges with Mercy!) –and it just made me long all the more for the book when these two series’ meet at a crossroads!

This book also made me cry, but that’s too much of a terrible spoiler to go into.

I am thrilled to know that Briggs is currently working on a book of “Mercy’s World” short stories (as yet untitled, and without firm release date). This will be a collection of short stories from various anthologies, including a few new ones Briggs is writing. She has said there will be a Ben short story – and I can’t wait. Reading about Ben in ‘Frost Burned’ reminded me of what an enigma he is, and how interesting. It also reminded me that I'd love for him to have a happy story (yes, romance!) at some point to make up for his hard life. And I’m also crossing my fingers for a short story about that certain secondary character who strolled from ‘Alpha and Omega’ into ‘Frost Burned’ – because he was a standout in this book; unpredictable, funny and lethal all at the same time.

I am worried that updates on Brigg’s website mentions she has another ‘Mercy’ to write under contract, and she’d like to write another ‘Alpha and Omega’ and is currently working on a ‘Mercy’ book (so she is definitely contracted for 2 more?). I worry, only because with ‘Frost Burned’ I see no end in sight – I can honestly picture the ‘Mercy Thompson’ series going well into series double-digits. With ‘Frost Burned’ Briggs has expanded her world exponentially – everything is more politicized and on-edge, Mercy has more to lose than ever before and has found a groove in her personal relationships and pack to protect. I don’t want this series to end anytime soon – likewise, I can imagine ‘Alpha and Omega’ becoming more complicated from the events of ‘Frost Burned’ and I’m deliriously excited to see where that leads in a new book.

‘Frost Burned’ was such an incredible book that dug me even deeper into Mercy’s world, and now I never want to leave.