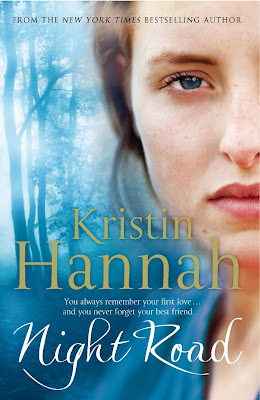 For a mother, life comes down to a series of choices.
To hold on…
To let go..
To forget…
To forgive…
Which road will you take?

For eighteen years, Jude Farraday has put her children’s needs above her own, and it shows—her twins, Mia and Zach—are bright and happy teenagers. When Lexi Baill moves into their small, close knit community, no one is more welcoming than Jude. Lexi, a former foster child with a dark past, quickly becomes Mia’s best friend. Then Zach falls in love with Lexi and the three become inseparable.

Jude does everything to keep her kids safe and on track for college. It has always been easy-- until senior year of high school. Suddenly she is at a loss. Nothing feels safe anymore; every time her kids leave the house, she worries about them.

On a hot summer’s night her worst fears come true. One decision will change the course of their lives. In the blink of an eye, the Farraday family will be torn apart and Lexi will lose everything. In the years that follow, each must face the consequences of that single night and find a way to forget…or the courage to forgive.

Lexi Baill arrives in Washington State to live with her aunt, Eva Lange, in 2000. Lexi has been bounced around many foster homes throughout her childhood, and spent some sporadic years living with her drug-addict mother in between. But now Lexi has found a home and stability with her aunt Eva, living in a little yellow trailer in Port George, Washington.

Jude Farraday is mother to twins Zach and Mia – polar opposites and partners in crime. Mia is shy and reclusive, while Zach is popular and outgoing. The two are best friends, and the pride of Jude’s life. Jude’s doctor husband, Miles, may have a point about her helicopter-parenting and reluctance to cut the apron-strings where the twins are concerned, but Jude’s own childhood was a lonely one cut off from her mother after her father’s death, and she won’t do that to Mia and Zach.

When Mia and Lexi strike up a powerful bond over a shared-love of classic literature, Jude is both relieved and nervous. Lexi brings Mia out of her shell, but Jude is also aware that the Farraday’s have a very different, privileged life to that of Lexi and her aunt . . . then there’s the fact that Mia has been hurt in the past, when her girlfriends developed crushes on Zach, and abandoned Mia for him.

But Mia and Lexi prove to have a bond that’s almost as strong as the one Mia and Zach have – and for three years they are the best of friends . . . until one night changes everything. Zach is left an only-child, Jude is cut adrift and Lexi takes on the burden of blame – and none of them will ever be the same again.

‘Night Road’ was the 2011 popular fiction title from Kristin Hannah.

This novel is just awful. I hated reading it – all the characters irked me, and some of them made me want to reach into the story and throttle them. But I kept reading because I wanted to know how it would end. . . this book is, literally, like a McDonalds meal that you start feeling guilty about from the first bite but you can’t stop yourself from finishing all of it.

We begin in 2000, when Lexi arrives at Port George and strikes up a friendship with Mia and is welcomed into the Farraday bosom by Jude. The first few pages introduce us to Lexi – a young girl who has had an unfair share of heartache in her short life. Between foster homes and witnessing her mother’s decline (more than once) her arrival in Port George to live with her unknown Aunt Eva is the first really good thing to happen to Lexi, possibly in her whole life.

Then we’re introduced to Jude – who is panicking about her kid’s first day of high school. She’s worried that Mia won’t make friends, and she’s concerned about the kind of friends Zach will make . . . yep, Jude is one of those parents. Meeting Jude and the Farraday family after having first met Lexi is rather jarring – even more so when Jude goes over the floor-plan of their massive manor-home (the kids have the entire first floor to themselves – including a gaming room.) Straight away, I was on Lexi’s side and more invested in her story and narrative voice. I’ll always root for the underdog, and compared to the obnoxious wealth of the Farraday’s, Lexi is an extreme-underdog

Then the timeline of this story starts getting a little skewed . . . we jump ahead from 2000 to three years later (right in an odd place too, Hannah snaps forward right before we’re about to read Jude, Mia and Lexi start bonding on a girl’s outing).

The next little chunk of timeline concerns Lexi and Zach’s developing feelings for one another in their senior year of high school – something they have to hide from Mia because she’s so fragile after having one friend in the past hook-up and break-up with her brother that has apparently scarred her for life. Geez. You know things aren’t good when you give characters nicknames in your head – Mia was ‘needy-psycho’ to me. This girl just grated – though I think Hannah meant to portray her as a sweet, innocent soul who needed looking after . . . I just read ‘whiny’. This section of story also concerns Lexi working round-the-clock at an ice-cream shop to try and scrape enough money together to go to a small state school, while Mia and Zach are struggling to decide between USC, Yale, Stanford . . . and of course dominating parent, Jude, is stressing right along with them. When Lexi’s Aunt Eva contemplates dipping into her life-savings to help Lexi go to a four-year school, I officially wanted to smack every Farraday character over the head, repeatedly.

Now, a huge let-down of this book is the supposed "soul-mate" romance of Zach and Lexi – which is meant to cover all manner of ills and explain a lot, later in the story. It doesn’t help that Zach is written a little too true-to-life as a teenage boy who says not a whole lot. Seriously – when Hannah pulls the “he’s in love with her!” card I was sitting there thinking ‘Really? How can you tell? The boy does not talk!’ Actually, Zach suffers the same fate as his father, Miles, in that neither male character does or says a whole lot. The men in this story feel depleted and sidelined, completely overpowered by the women despite them all going through the same losses and traumas. This is especially bad for Jude’s story – I might have warmed to her if she had been a well-rounded woman but she is literally labelled MOTHER and not much else. Her marriage, despite going through the biggest trauma any relationship can experience, is just back-burner to her being a mother (and then a mother who loses a child). She gardens, but that’s really her only discernible characteristic. She has her own mother-issues, but they’re anaemic and not at all an excuse for her being such a one-dimensional mother-cyborg. I get that this is the point of ‘Night Road’ – here is a woman who sees herself as a mother and nothing else, and what happens when that’s (partly) taken away from her? Well, that’s boring to me. Jude is the book-equivalent of all those people in my Facebook feed who only post photos and updates about their kids and nothing else – as if they weren’t really alive until they had offspring. Blergh.

The second-half of the story jumps ahead to 2010 and concerns everyone’s fate after the tragic accident that kills Mia . . . and lays blame entirely (unfairly) at Lexi’s feet.

Now, if this had been a Jodi Picoult novel, you can bet this would have been the point that the story started. Because this is the most interesting portion of the whole book – everything else that came before; setting up Mia & Zach’s twin-dynamic, Jude’s helicopter parenting, the kids growing, Lexi & Zach’s romance . . .  all that was just boring filler. Part-two of the story, which starts at page 241 of this 385-page book, is where the whole thing should have started from (with some backtracking of story origin). Here is where Hannah pulls out questions of morality, forgiving, guilt and redemption.

Jude just gets worse. Maybe I was meant to feel sympathy for her – but I have little sympathy for those determined to be victims and wallow in their own pain while blaming and punishing others for their state of being.


“Most patients want to learn how to live. They want me to make a map that they can follow to get them to a healthy future. You simply just want to survive each day.”

“He-llo. I’m not bipolar or schizophrenic or borderline. I’m sad. My daughter died, and I’m devastated. There’s no getting better.”

“Is that what you want to believe?”

“It’s the way it is.” Jude crossed her arms. “Look, you’ve helped me, if that’s what this is about. Maybe you think I should be doing better by now, maybe you think six years is a long time. But it’s not, not when your child died. And I am doing better. I grocery shop. I cook dinner. I go out with girlfriends. I make love to my husband. I vote.”


I cannot, for the life of me, tell you why I didn’t chuck this book away about 20 pages into it. But I think I was looking forward to the skip-ahead portion, when we get to the meat of the morality-story. And, honestly, I did race to read that last half (though it left me utterly unsatisfied). Hannah rushes the ending, and what could actually take up an entire 300+ pages is watered-down with happily-ever-after shenanigans and unbelievable resolutions.

I know that popular-fiction writers get a bad rep. Their books are seen as nothing more substantial than fairy-floss . . . but, by God!, there are nuances within this genre. Someone like Jodi Picoult can have me enraptured in a couple of chapters, and I’ll finish one of her books a weeping-wreck, but completely satisfied. Then you read someone like Kristin Hannah who writes despicable characters like Jude (I’m convinced we were meant to like her) and waffles on for 280-pages writing absolute filler rubbish – only to leave the actual meat of the story for the last 100 rushed pages. But, you know, I can only blame myself for this one – I knew it was bad after the first chapter, but I kept punishing myself and reading it. Fool me once.