'The Wild Girl' by Kate Forsyth 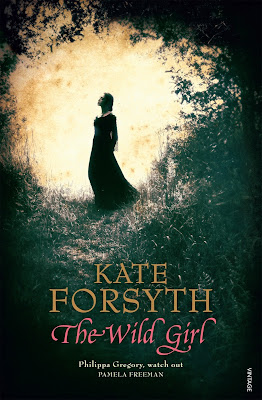 Received from the Author

One of the great untold love stories - how the Grimm brothers discovered their famous fairy tales - filled with drama and passion, and taking place during the Napoleonic Wars.

The Wild Girl tells the story of Dortchen Wild. Growing up next door to the Grimm brothers in Hesse-Cassel, a small German kingdom, Dortchen told Wilhelm some of the most powerful and compelling stories in the famous fairytale collection.

Dortchen first met the Grimm brothers in 1805, when she was twelve. One of six sisters, Dortchen lived in the medieval quarter of Cassel, a town famous for its grand royal palace, its colossal statue of Herkules, and a fairytale castle of turrets and spires built as a love nest for the Prince-Elector's mistress. Dortchen was the same age as Lotte Grimm, the only girl in the Grimm family, and the two became best friends.

In 1806, Hesse-Cassel was invaded by the French. Napoleon created a new Kingdom of Westphalia, under the rule of his dissolute young brother Jérôme. The Grimm brothers began collecting fairytales that year, wanting to save the old stories told in spinning-circles and by the fire from the domination of French culture. Dortchen was the source of many of the tales in the Grimm brother's first collection of fairy tales, which was published in 1812, the year of Napoleon's disastrous march on Russia.

Dortchen's own father was cruel and autocratic, and he beat and abused her. He frowned on the friendship between his daughters and the poverty-stricken Grimm Brothers. Dortchen had to meet Wilhelm in secret to tell him her stories. All the other sisters married and moved away, but Dortchen had to stay home and care for her sick parents. Even after the death of her father, Dortchen and Wilhelm could not marry – the Grimm brothers were so poor they were surviving on a single meal a day.

After the overthrow of Napoleon and the eventual success of the fairytale collection, Dortchen and Wilhelm were at last able to marry. They lived happily ever after with Wilhelm's elder brother Jakob for the rest of their lives.

A margins note appears in the personal copy of Jakob and Wilhelm Grimm’s ‘Hänsel und Grethel’ – which reveals that in 1813 Henriette Dorothea (Dortchen) Wild contributed the children's verse answer to the witch, "The wind, the wind,/ The heavenly child," which rhymes in German: "Der Wind, der Wind,/ Das himmlische Kind." It is likely that the Grimms heard the entire story in the Wild household.

Wilhelm Grimm went on to marry Dortchen Wild, in 1825.

In ‘The Wild Girl’, Kate Forsyth delivers a breathtakingly epic historic romance that imagines the relationship between Wilhelm Grimm and Dortchen Wild – set against the Napoleonic Wars and during a time of great hardship and uncertainty for the German people.

In her Foreword, Forsyth asks readers to put the Brothers Grimm into correct historical context;


Most people imagine the brothers as elderly men in medieval costume, travelling around the countryside asking for tales from old women bent over their spinning wheels, or wizened shepherds tending their flocks. The truth is that they were young men in their twenties, living at the same time as Jane Austen and Lord Byron.


This was the moment Forsyth hooked me. Because I was one of those people who must have had too many heavy doses of Hollywood, and was thinking of the Brothers Grimm as hobbled old men, something like Merlin-figures rather than real people. To think that they were young men, living during war-time completely reshaped my perception of them – and was a fantastic leaping-off point to begin ‘The Wild Girl’. Forsyth has created a mesmerizingly detailed historical reimagining of the Grimm’s and their journey to storytelling, not unlike Philippa Gregory or, dare I say, Hilary Mantel (if she ever turned away from tales of the monarchy.)

This is a very long book (coming in at 533-pages) but that’s because Forsyth is covering the Napoleonic Wars (1803-1815) as well as Wilhelm and Dortchen’s rocky road to happily-ever-after (the book begins in 1805, but they weren’t married until 1825). And Forsyth has not skimped on any details concerning the war or in building Jakob and Wilhelm’s characters – she explores Wilhelm as a life-long asthma sufferer, and covers the death of Admiral Nelson at the Battle of Trafalgar (news of which is reported second-hand to the German citizens, who are desperate for news of Napoleon’s movements and their impending invasion). All of which leads to creating a storm around the Grimm’s hometown of Hesse-Kassel in Hanau, which was invaded by France in 1807. Forsyth really highlights how the Napoleonic Wars went a long way to informing the Brother’s path in life – when a new French Government makes Jakob and Wilhelm’s law studies null and void, the brothers start taking their collection of stories seriously for alternate income, and because of a sense of Germanic patriotism.

History geek that I am, I loved Forsyth’s attention to historic detail and her own imaginings and interpretations on how circumstance shaped two of the most famous storytellers in history. The most I knew of the Brother Grimm and their tales was how they were anglicized versions of fables that had roots in many different countries and cultures. Like ‘Cinderella’ having threads of a Chinese Duan Chengshi story, or being somewhat similar to a Philippine tale called ‘Mariang Alimango’. But reading ‘The Wild Girl’ puts a very interesting spin on this idea that the Brothers Grimm pillaged and plundered exotic tales and made them their own – it’s remarkable to think that while modern naysayers would have us believe the brothers tried an ‘Anglicisation’, in actual fact by collecting stories they were merely trying to preserve their own Germanic culture against Napoleon’s French empire.

But ‘The Wild Girl’ is far from a history lesson. No, the real heart of this book is in Wilhelm and Dortchen’s romance, which begins when Dortchen is twelve-years-old and develops a small crush on the handsome Grimm brother;


. . .  but love has never been something that can be constrained by age. It happened in the way of old tales, in an instant, changing everything forever. It was a fork in the path, the turn of a key, the kindling of a lantern.


Dortchen is one of six Wild sisters, just as the Grimm family have six children (five boys and one girl, Lotte, who is Dortchen’s best friend). Dortchen’s father is the local apothecary, and a tyrannical man incapable of expressing love but quick with a beating for minor disobedience - he can easily be believed as the archetype of every witch/Bluebeard villain. As Napoleon closes in, times become harder and harder in Hesse-Kassel and both the Wild and Grimm families suffer. And as Dortchen and Wilhelm get older and realize their love for one another, the more it seems these are not the times for happy endings.


She sighed and tried once more to draw away. He gripped her forearms and said, in a low, intense voice, ‘I've been reading Novalis. Do you remember? He said the most beautiful thing about love. It’s given me new faith, Dortchen.’

‘What did he say?’ she asked, waning to believe, if only for a minute.

‘Love works magic,’ Wilhelm said. ‘It is the final purpose of the world story, the “Amen” of the universe.’

She caught her breath in a sob and reached up to kiss him. For a long moment, the world stilled around them.


But Forsyth has looked beyond impoverished times and political upheaval as the reason for Dortchen and Wilhelm’s prolonged courtship. Just as every good Grimm tale contains a truly heinous villain, so too does ‘The Wild Girl’ – and this, I’m afraid, is a tale as old as time. Forsyth handles Dortchen’s story of abuse with tender care, and though there is no factual evidence to support Forsyth’s imaginings, her Afterword certainly lays down strong reasoning in the disturbing stories Dortchen told the Brothers Grimm.

Kate Forsyth’s ‘The Wild Girl’ is a remarkable tale that beautifully blends fact and fiction. It is a sweeping historical romance that will appeal to both adults and young adults, as it reminds us the power of storytelling and loving, even in the hardest of times.