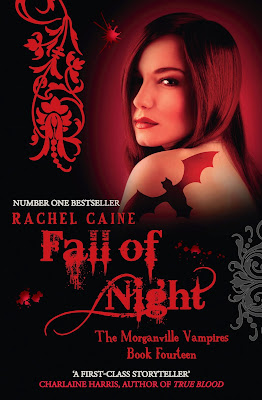 
Thanks to its unique mix of human and vampire residents, Morganville is a small college town with big-time problems.  But it isn't the only town with vampire trouble . . .


Claire never thought she'd leave Morganville, but when she gets accepted into the graduate course at MIT, she can't pass up the opportunity.  Saying goodbye to her firends, especially her boyfriend, Shane, is bittersweet, and her new life at MIT is both scary and exciting.

Entrolled in a special advanced study programme with Professor Irene Anderson, former Morganville native, Claire is able to work on VLAD, her machine designed to cancel the mental abilities of vampires.

But Morganville and its inhabitants are never really far from Claire's mind.  When she begins testing her machine on live subjects, things quickly spiral out of control, and Claire begins to wonder whether leaving Morganville was the last mistake she'll ever make . . .

Following from the events of ‘Bitter Blood’, when lives were lost and friendships put to the test, Claire Danvers is following-through with her decision to leave Morganville, and attend the MIT graduate program in Cambridge.

Claire has made the monumental decision to leave her friends behind – including newlyweds Michael and Eve, who want to start acting more like a married couple (less roommates should help with that). But Claire is also determined to leave her beloved boyfriend, Shane, behind too. Because Shane made the worst mistake not too long ago, believing a lie that Michael told about his relationship with Claire – and now she needs to be away from the most important person in her life, to try and find who she is without him.

In Cambridge, Claire has moved into an apartment with her pre-Morganville best friend, Liz. But straight away Claire is off-balanced by the fact that her blue room apartment is nothing as homely as the Glass House. Then there’s the fact that Liz has turned into a flake, dressing in schoolgirl outfits and decidedly disinterested in books. She also has a stalker – a man named Derrick who keeps an unwanted vigil of their house.

Claire will be assisting a Professor Irene Anderson during her MIT graduate program – another ex-Morganville resident, and another assistant who survived tutelage under Myrnin. They will be working on Claire’s VLAD machine – a mood-altering device that should help humans with unruly vamps.

Meanwhile, in Morganville, Shane can’t stop missing Claire (and worrying about her). He also feels like the awkward third-wheel in Michael and Eve’s marriage. So he makes the momentous decision to drive to Cambridge and keep an eye on Claire … from a distance.

It always happens that when I crack open the latest ‘Morganville’ instalment, a small part of me worries that this might be the book to mark my waning interest. There aren’t many series that have been around since 2006 with consistent releases, and still manage to not only maintain, but consistently grow its fan-base … so I always go into ‘Morganville’, with a small pessimistic part of me that’s waiting for the magic to dissipate. But I’m happy to report that ‘Fall of Night’ is not that book – and, actually, it looks like Rachel Caine has just given this series a second-wind…

In ‘Fall of Night’, Caine is again taking the characters out of Morganville. She did this in book eight, ‘Kiss of Death’ – taking the awesome foursome on a killer (literally) road-trip that opened their eyes to the fact that the grass is not necessarily greener on the vampireless side. The big difference, of course, is that in this 14th book, Claire is all on her lonesome – and by choice. Not only is she outside of Morganville, but she has left her friends behind too.

Now, Claire has always been a strong, remarkable young woman. She prefers brains over brawn (but also knows how to throw a punch) and she’s a very level-headed, quick-witted warrior. But, ever since Michael, Eve and Shane gave her the safety of the Glass House in book one, she has been part of a unit. Now that we’re 14 books in, I can see it makes a lot of sense for Caine to take Claire out of that home-base and show fans what she has become while living in Morganville. With Claire’s independence, fans can really appreciate that she loses none of her strength away from the awesome-foursome friendship unit. She might lose a little of her heart, but even away from Morganville Claire has a steel backbone and strong moral compass.

The heart though, is another matter … but again it makes sense that we see Claire and Shane put to the test. They’ve been an item for a long, long time and have become very co-dependent - so it was actually really nice for Caine to separate them and see how they go. Of course, it’s mostly Claire doing the separating since Shane can’t stay away for long (it’s more protective than stalkerish though – honest!) but it was nice to reaffirm why they are together, what remains when they are apart and the strength that binds them. For anyone doubting Claire and Shane being together for so long, and at such a young age – I think Caine puts a lot of those worries to bed in this book.

And this is also a book of new faces. Claire and Shane both befriend two Cambridge locals who work with Professor Anderson, and at the bar where Shane gets a job as busboy. Pete is a bouncer and rough teddy-bear, then there’s Jesse – a fiery red head with killer curves and a badass streak a mile long. When Derrick, Liz’s stalker, starts encroaching on Claire’s new territory, Pete and Jesse are there in lieu of Michael, Eve and Shane to have her back;


‘I can smell the crazy on that man from here. I have a nose for it.’ In the dim light, a passing car’s lights hit Jesse full in the face, and lit her up like a billboard. Her blue eyes were very, very bright, and for a second Claire had a Morganville déjà vu … but this was the real world, and Jesse was just a badass. Like Pete.Maybe that was enough.


I loved these two, especially Jesse. She poses an interesting twist in the story, and while some fans will probably grumble about her appearance I can’t wait to see how she shakes things up for a certain someone….

Caine is also touching on themes of the eighth book, ‘Kiss of Night’ – in that the Morganville kids learn that the outside world is just as tough and full of danger. Shane, especially, is somewhat surprised by the violence he encounters from regular humans;


For some reason, I thought that Morganville was the equivalent of ‘Dead Space’ Level Twelve, and having survived that, I didn’t rate the nerdy, vampire-free streets of Cambridge at more than a Level Two.


The difference with ‘Fall of Night’, however, is that some of the outside violence may be leaking into Morganville … but fans will just have to wait for ‘Daylighters’ releasing in November to find out more about that.

All in all ‘Fall of Night’ was another Morganville book that got my heart racing, my hands sweaty and my interest piqued. What can I say? Rachel Caine has done it again. 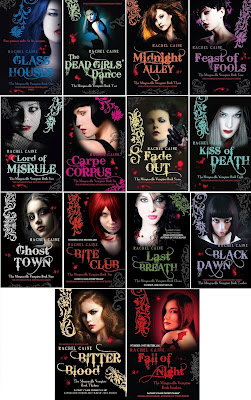