'Haze' The Rephaim #2 by Paula Weston 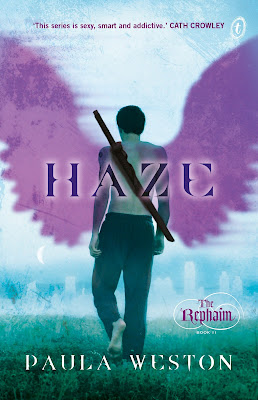 
‘But what if we can’t find Jude?’
He leans closer. His breath is warm on my ear. ‘We will.’
‘How can you be so sure?’ I want to believe him so badly, but this is Rafa. The guy who’s all action and no plan. His smile is tired, knowing. An echo of a shared past I don’t remember.
‘Because I’m not smart enough to give up, and you don’t know how to.’


Gaby Winters’ nightmares have stopped but she still can’t remember her old life. Still can’t quite believe she is one of the Rephaim—the wingless half-angels who can shift from place to place, country to country, in the blink of an eye. That she was once the Rephaim’s best fighter. That demons exist. That Rafa has stayed.

But most of all, she can’t quite believe that her twin brother, Jude, might be alive.

And Gaby can’t explain the hesitancy that sidetracks the search for him, infuriates Rafa, and sends them, again, into the darkest danger.

Her worst nightmares were actually memories.

Gaby Winters was dreaming about hell hounds and sword fights, and a beautifully dangerous boy at the centre of it all . . . and then she discovered it was all real. Arriving in the sunny Australian seaside town of Pan Beach, Gaby thought she was running from the twisted memory of the car crash that killed her twin brother, Jude, and left her scarred. But then Rafa arrived – with his hard eyes and quick smile – and he told her the truth. That Gaby’s memories were not her own, that she was not even human.

Gaby and Jude were like Rafa and countless others . . . they are Rephaite, offspring of fallen angels. Angels, who unleashed themselves on the earth and impregnated countless human females – and then left their offspring to deal with the fallout and their holy task to find their fathers, and bring them to justice.

Suddenly Gaby was inundated with her own history; both good and bad. She learned about the Angel Garrison and the Outcasts, and the fact that she and Jude hadn’t spoken to each other for years – ever since they had very different ideas of what to do with their fallen fathers, should they ever find them. Gaby discovered her wicked sword skills, and the decades-long feud she’s had with one Rephaite called Mya, who has romantic history with both Jude and Rafa.

But one thing she does know – if she was made to believe Jude was dead, there’s every possibility that the same thing happened to Jude. And he could be alive.

‘Haze’ is the second book in Australian author, Paula Weston’s, paranormal YA series ‘The Rephaim.’

Some books you crave. You keep returning to the cover art and re-reading the blurb, you stalk the authors’ Twitter, Tumblr, Goodreads profiles in hopes of gleaning morsels of information… you count-down to release day. Paula Weston’s ‘Haze’ was just such a craving. Her debut ‘Shadows’ snuck up on me at a time when I thought angels were done-to-death and could no longer tempt me. It was an exciting, careening paranormal YA debut that kept me guessing and had me falling for its bad-boy hero, Rafa, and cool heroine, Gaby Winters. Long after I’d finished reading I was still recommending the book to friends overseas, and spruiking to fellow bloggers.

So when ‘Haze’, the second book in the series, arrived early for me … I was a wee bit thrilled. ‘Shadows’ was such a tantalizing set-up; the fallen angels history, Rephaite responsibility and this brother and sister at the centre of a conspiracy theory. Weston left just enough breadcrumbs to drag me in, and leave me desperate for the second book.

‘Haze’ picks up where ‘Shadows’ left off – mainly that Rafa and Gaby have decided there’s a very good chance that Jude could be alive, and they have to find him. But in the search for Gaby’s brother and Rafa’s best friend – other factors are working against them. Like the fact that Gaby had been missing for months, presumed dead, and now that she’s back both factions of the Rephaite, the Angel Garrison and Outcasts, want a piece of her.

I loved that Weston really delved into the Rephaite rivalry in this second book. Admittedly, there were lots of story threads that interested me in ‘Shadows’ and ensured I'd be coming back for all subsequent books in this series – but the secondary Rephaim characters we met in that first book really intrigued me. Particularly when we discovered that Gaby was actually dating Daniel, right-hand man in the Angel Garrison, right up until the moment she went missing and got her amnesia tailor-made. In this second book we learn a lot more about Rafa and Jude’s Outcasts – namely, how much of a beloved leader Jude was, and the twisted relationship he and Rafa seemed to have with new designated leader, Mya. Then there’s Jones, Ez, Zak, Taya and Nathaniel – all these Rephaite characters who are really rounding out Jude and Gaby’s story, and making for a very interesting secondary cast line-up.

Another big focus in this book is on Rafa and Gaby – or, rather, Rafa and Gabriella. Weston leaves so many enticing little hints about what Rafa’s tumultuous relationship with Gabriella was like, and how it’s now influencing how he sees Gaby.


‘Sparring with you. I don’t think he was ready for it.’

I try to laugh but it comes out as a rasp.

'I mean it. You haven’t trained together for a very long time. For the last decade, any time you two threw punches at each other, you were deadly serious.’ She tucks her feet underneath her. ‘The problem today was that you were too good.’

‘How is that a problem?’ I finally look up. She gives me a sad smile.

‘There were moments when you fought like the old Gabe. I think at the end there, he forgot which version of you he was fighting.’


I've never read a relationship quite so complicated as the one Rafa has with Gabrielle/Gaby – and I love that Weston is making their relationship a mystery unto itself. I will say I wished Weston would delve a little more into Gabriella’s romance with Daniel, but I understand that’s hard since Gaby can’t remember anything and Daniel hasn’t exactly endeared himself to her . . . but it’s the very reason that I can’t picture him as a love interest that I’m desperate to know his history with our cool protagonist.

Weston is really proving herself in this second ‘Rephaim’ book, to be one very savvy paranormal author. She knows just how to expand and contract the universe she’s created – balancing new clues regarding the fallen angels and a mystery room in Iowa, with the more personal and immediate story of Gaby’s memory loss and her missing brother. There’s a really nice balance in this series so far, that when the fallen angels plot seems too big and all-encompassing, a mammoth story to be played out, that Weston brings the plot back to being about Gaby searching for her brother, and just trying to remember herself.

Everyone who read Paula Weston’s, ‘Shadows’, would have had an inkling that this was an exciting debut author, and one to look out for. But those who come back for a second spin with ‘Haze’ will know, without a shadow of a doubt, that Weston is something special indeed, and ‘The Rephaim’ is one of the most original and intriguing new young adult series available right now. ‘Haze’ leaves on one heck of a cliff-hanger, and I am absolutely desperate to follow Weston down whatever twisted path she has planned for the third book. 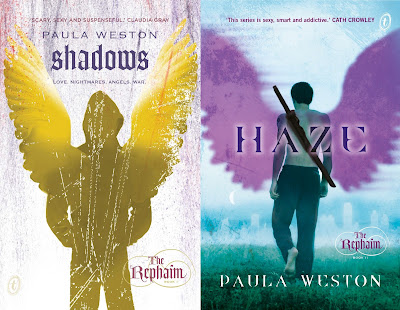