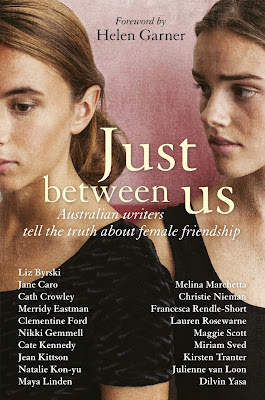 
Or competitive, manipulative and downright bitchy?
Or somewhere in between?

In Just Between Us, a host of Australia's best-loved female writers bare all on this age-old quandary: Are female friendships all-natural and nurturing? Or are some more damaging than delightful? And most of all, what happens when female relationships go off the rails? And who is to blame? While falling in and out of romantic love is a well-documented experience, losing a friend rarely gets discussed. Which doesn't mean the pain is less – quite the opposite, as we discover in this extraordinary collection of heartfelt fiction and non-fiction works that put female friendship in the spotlight.

Nikki Gemmell looks at the hardwiring that keeps us bonded in tightly knit packs, but makes us feel oh-so-claustrophic in mothers groups and at the school gate. Melina Marchetta reveals the peculiar shame of being overlooked for the high-status netball positions of Centre and Goal Attack. Liz Byrski conducts a forensic examination of her own friendship history, and finds some uncomfortable patterns. And Merridy Eastman pens a letter from Helena to Hermia from A Midsummer Night's Dream, which shines the light on one of literature's most famously dysfunctional female friendships.

On the surface, a collection of fiction and nonfiction stories from nineteen different writers on the topic of ‘friendship’ sounds like it could be the stuff of a dull Year Nine English writing assignment. But it’s in the subtitle of 'Just Between Us' that the tension and purpose is revealed; ‘Australian writers tell the truth about female friendship.’ And then you only need read the foreword by Helen Garner to know that this is a very special book indeed, promising “a feast of things that women do not consider trivial.” Garner surmises; “that to examine with reverent attention the tiniest of human details is anything but a waste of time. It may even be essential to survival.” Indeed.

This book is about the little things from which big things grow – the silences and missed phone calls, a crackle of tension in the air and a gaze averted. Some stories are funny, others confessional; many of the nonfiction authors, especially, try to offer condolences and answers to sunken friendships, while others are willing to let questions go unanswered and friends untethered. In this book nothing is too small, all is worthy of examination. From those friendships that drifted into the ether, to those cut short by death. All are examined with the same weight. In the introduction, the books' editors promised that this anthology would “escape the simplicity of those often-seen caricatures of female friendship: the effortless ‘best friends forever’ and the bitchy rival.” And they deliver.

It’s often the end of a friendship that is examined in these stories. And Julienne van Loon inadvertently questions that in her nonfiction piece ‘In Broad Daylight’, about her last “real” female friend who lived a short, tragic life;

It is curious that friendship is most often written about after it has gone, as if death legitimises the discussion of what was previously too private or fragile a territory. Are friendships between women particularly private and fragile?


It’s often said that truth is stranger than fiction, and that seems never truer than in the case of female friendships. This anthology has six fiction and thirteen nonfiction pieces – and some of the true stories come from surprising authors. Cath Crowley and Cate Kennedy have decided to don truth over fiction for their pieces, with glorious results. Lots of the stories sting a bit, because there’s universal truth in them and the authors are laying bare some of their deepest regrets and bad behaviour, and it was in these pieces that I saw most of myself;

— ‘A Letter to a Lost Friend’ by Cath Crowley


Clementine Ford’s piece ‘Girls Who Wear Gingham’ rings especially, uncomfortably true for me. I went to a private all girl school. I wore gingham. To this day if I have a particularly nasty gossip session with my best friend from high school, we shrug at our petty nastiness and blame it on the school environment that bred it in us.


Other authors make delicious breadcrumbs of their stories, like Melina Marchetta’s ‘The Centre’, which is written entirely in epistolary email format between old high school friends rehashing an old debate over netball hierarchy … but which eventually reveals deeper hurts in one of their own, called Matilda. Even if I didn’t know (having heard Melina speak at a Penguin teachers function) that this was the beginning/trigger of a new book she’s working on (two words: Jimmy Hailer) I would want to follow wherever this story leads.

Sexuality and romance is also beautifully explored in some of these stories; it’s all part of the prism, and love often follows friendship. As the editors promised, there’s nothing cliché or deliberately titillating in such stories – unsurprisingly (to women, at least) there’s none of that ‘male gaze’ pillow-fighting during a sleepover stuff … it’s quieter in ‘Just Between Us’, runs deeper.

Miriam Sved’s fictional ‘One True Thing’ is about a woman who finds a collection of short stories written by one of her old school friends; one story clearly borrows heavily from their girlhood, and the sexual overtones colour her own memories of their past and have her desperate to reconnect and get to the bottom of what was fact and what was fiction for both of them. Francesca Rendle-Short dissects and vivisects in the nonfiction ‘Glossus’, on her marriage that eventually crumbled, and the little loves she held for the female friends along the way until she found ‘My Beloved’:


Memories are encoded in our bodies – the forgetting and remembering; they press and lift us into different shapes, change the colour of our skin. There is a kind of ecstasy thinking about what J gave me that night, I feel it in my bones: because she didn’t care what anyone thought, no matter who or what she was or wanted to be – which was none of anyone’s business anyway, she was quick to add. She kept holding my hand, kept dancing, and became even more provocative and free. She challenged them all to yell it again, to grow more furious than they already were. J was always very good with her voice.


I would love it if Pan Macmillan Australia made another anthology, of Australian writers telling the truth about male friendships. Helen Garner’s foreword includes a conversation with a male friend about the break down of her female friendship, to which he replies “Blokes tend to shrug and barrel on through.” Maybe that’s true. Maybe it’s oversimplified. I know that in reading ‘Just Between Us’ I felt a deep connection to all of the stories in some way, because they’re my story too – but I’d quite like to be surprised and learn something about male friendships that could also benefit from an anti-cliché short story anthology.

Here is a book that explores the shifting tectonic plates and little earthquakes that make and break female friendships. It is equal parts beautiful and uncomfortable, true and elusive … I found a bit of myself in every single piece, and after I finished reading I instantly wanted to pass it on to my friends so that they too could find themselves within the pages.