'The Originals' by Cat Patrick 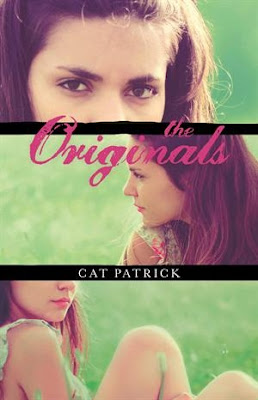 To the outside world, Elizabeth Best is a model student. She's a cheerleader, gets straight As and holds down an after-school job. But what the outside world doesn't know is that Elizabeth Best is actually three girls. Lizzie, Betsey and Ella are no ordinary triplets. Born as part of an illegal cloning program, the girls were forced into hiding when the program was uncovered. To avoid being taken away, the girls have lived as one girl ever since. Living a third of a life can suck. Imagine having to consult your sisters before choosing your clothes, or hairstyle, or boyfriend. So when Lizzie is forbidden from seeing Sean, the amazing guy from her English class, she and her sisters decide they've had enough. But for a chance at a full life, they'll have to risk everything they know.

One of the reasons I love Cat Patrick is because I find her so hard to explain to other people. Whenever I ‘pitch’ a Cat Patrick book, I can never do her justice in trying to explain her unique contemporary/magical-realism-esque plots that make her a sort of Isabel Allende or Alice Hoffman for the younger set. That being said, with each new book that she brings out, I’m afraid she’s starting to lose that quirky edge and magic realist spin.

‘Forgotten’ was about a girl who remembers her future, but forgets her past. She’s an anomaly who works hard to hide her deficiency, and is just trying to grow up as a normal girl in a small town and get closer to a guy she can’t remember she likes. I loved the balance of out-of-this-world with the struggle for normalcy, and while Patrick does eventually glimpse the roots of the backwards-forwards problem, ‘Forgotten’ doesn’t hinge on a solution and actually leaves off with a fair bit of mystery and magic still swirling.

Second book, ‘Revived’ is about a secret government agency responsible for a drug that brings people back from the dead, and one girl who has lived so many different lives … until she meets the one boy who makes her want to stay in this one. I liked ‘Revived’, maybe not as much as ‘Forgotten’, but it was still a winner for me.

Third book, ‘The Originals’, brings in yet another secret government agency (a different one, not the same from ‘Revived’) that clone-sisters Lizzie, Ella, and Betsey Best and their lab technician mother are on the run from. For much of their lives, the girls thought they were triplets – until they were woken up in the dead of night by their mother and told the truth, and forced to run. It turns out that, after their mother lost her baby daughter, she went against her company and cloned her dead baby’s DNA, creating Lizzie, Ella, and Betsey. Now teenagers, the three girls live under the guise of ‘Elizabeth’ Best and each is allotted a third of the day to play out the role. But when both Lizzie and Ella develop feelings for two very different boys, they realize how much they’re not carbon copies and are actually desperate to break away from this triumvirate.

There were elements of ‘The Originals’ that I really loved; one being the genetic engineering that’s explored, with the ethical issues of ‘playing God’ (a role, I would say, the girls’ mother takes very seriously and tyrannically). I also appreciated that the girls’ were created, not from a place of scientific experimentation, but parental love and loss. The story about their mother losing her baby is a haunting and deeply affecting one, and will certainly make some people sympathise with her (possibly not throughout though, as the story evolves). And I appreciated the fact that all three girls are very different, and although Lizzie is our narrator, Patrick definitely lets it be known that these are three very different individuals being straight-jacketed into one personality.

Immediately, I want to take back what I said, not because I didn’t mean it, but I don’t want to get into a big discussion about it. I think Mum believes that we’re content or at least satisfied with the situation. And I guess until recently, we have been. I have been…maybe because I didn’t know any better. But now I know things need to change… I just don’t know how. And without knowing, now’s not the time to open that can of catastrophe.


And there’s a very nice, VERY complicated romance at its heart, when Lizzie falls for a boy called Sean Kelly, while her sister Ella likes a Neanderthal called David …and their mother allows the girls to date only one boy (between them) and she chooses David over Sean. Yeah, it’s deliciously, unnervingly complicated and just the sort of push that Lizzie needs to start thinking about what she wants and what she’s not willing to give up.

So, there was a lot that I liked … but at the same time, some stuff just didn’t work. It’s understandable that a book about clones would have to some how bring in a government agency (or else be set in the future or an alternate world?) and Patrick touches on the trauma that the girls have gone through, being on the run from their mother’s former employer and the fact that she broke every single, ethical rule to bring them into this world. That’s a big set-up, right there. But the thing is, Patrick doesn’t want to concentrate on the government agency angle. This is, instead, very much a book about first love, coming-of-age and breaking away from your family to stand on your own two feet … all while being a clone, albeit. I was reminded of that old writing idiom, that if there’s a shotgun on the wall in Act I then it has to be fired by Act III; except it doesn’t go off in ‘The Originals’, making for a somewhat lacklustre end.

See, this is the problem. I loved that ‘Forgotten’ had the quirky set-up but none of the big bang stuff, involving government conspiracies and a teenager on the run. Likewise, I quite liked that ‘Revived’ was all about a girl who has grown up within the conspiracy institution. ‘The Originals’ feels like an odd mash-up of the two; government conspiracy is how the characters got to the sticky situation they’re in, but the whole story is about first love, as opposed to government menace. It left questions hanging, bought the tension and high-stakes down by a few notches and just seemed a little confused, all round.

I still love Cat Patrick, and I’m actually relieved to read the blurb of her fourth book (with Suzanne Young) coming in August 2013 and called ‘Just Like Fate’ – which sounds like it has more of that magical-realism, teen-angst mix-up that I so loved in ‘Forgotten.’ I’d still say that Cat Patrick is one author you have to read, if only to bask in the brilliance of her eclectic and unique stories … but maybe go for ‘Forgotten’ or ‘Revived’ over ‘The Originals.’