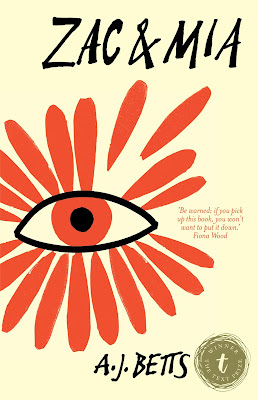 The last person Zac expects in the room next door is a girl like Mia, angry and feisty with questionable taste in music. In the real world, he wouldn’t—couldn’t—be friends with her. In hospital different rules apply, and what begins as a knock on the wall leads to a note—then a friendship neither of them sees coming.

You need courage to be in hospital; different courage to be back in the real world. In one of these worlds Zac needs Mia. And in the other Mia needs Zac. Or maybe they both need each other, always.

Zac Meier tracks his fight with leukaemia by NASA’s Curiosity rover. When he was first admitted he watched a documentary about the construction of the rover; when he first relapsed the launch was making headlines and the night before his bone marrow transfer he watched footage of the rover being shot into space. Now he’s stuck in isolation from November 18 to December 22 while the graft from a German donor (his friends have since nicknamed him ‘Helga’) safely heals. They can shoot a robot into outer space to explore a new planet but haven’t yet found a cure for cancer . . . and that’s just the way it goes.

So, Zac waits. He waits with his mum who plays Call of Duty with him and does word puzzles. She welcomes all the new patients that are frequently in and out of this floor and she always has a detailed answer ready when the nurses ask Zac; “have you opened your bowels?”

And then one day a newbie arrives next door. Zac suspects it’s someone his own age (around about seventeen; the unlucky cut-off which means he just missed out on being admitted to the ‘fun’ and colourful children’s ward) – the real clue is when the new patient starts blaring Lady Gaga.

Over the next few days Zac finds out his next-door-neighbour is a young girl called Mia Phillips, who has localised cancer in her lower leg. She’s lucky. Her chances of survival kick Zac’s leukaemia stats in the butt.

Zac and Mia strike up a tentative neighbourly friendship.

It starts with tapping.

And all the while Zac learns of Mia’s anger and secrecy; she has screaming matches with her mother and according to Facebook, none of her friends know that she’s seriously sick.

When Zac’s isolation comes to an end and it’s time for him to re-enter the real world and await the all-clear, he thinks he’s seen the last of angry Mia and her good-chances.

Little does he know, their story is just beginning.

‘Zac and Mia’ by A.J. Betts was the winner of the 2012 Text Prize for Young Adult and Children’s writing. Betts now joins the long list of beloved Australian children’s and young adult authors who found their start with the prestigious Prize.

Can we just get something out of the way quickly? . . . ‘The Fault in Our Stars’ by John Green. Yeah. So ‘Zac and Mia’ is only similar to Green’s juggernaut in that it deals with young people who have cancer. That’s it. And I’m going to make a big call and say that Green’s book is fantasy compared to Betts’s raw tale of surviving the shitty hand that fate deals.  There’s certainly no Phalanxifor miracle drug in Betts’s book.

For communicating the day-to-day mundane madness of cancer, Betts deserves high praise. I've read a few cancer YA books now where it’s all about what comes after – whether that be after you know the battle is lost or remission won – and there’s often a bucket list involved either way (and a prerequisite romance for a real robust life experience.) And, that’s fine. But in the first half of ‘Zac and Mia’, Betts tackles what happens in the thick of fighting. She presents Zac a few days into his isolation after a bone marrow transfer. She writes about him being waylaid by a common cold, and how he looks like Jabba the Hutt – bald and bloated from medication. When we first meet him, Zac is bored and sick of himself – he’s counted the tiles on the roof and eavesdrops on his neighbours as they go through the routines he has come to know by heart. Everyone probably knows someone or of someone who has/had cancer – I certainly do. And I can attest to the waiting lunacy and monotony there is in ‘fighting’ for your life. So I love that Betts presented that side of Zac and Mia’s story – it’s certainly not pretty, and it does mean that the book has a slow beginning . . .  but I think it was so important that Betts show that side of cancer; the truth and the tedium.

It’s also in this slow but important beginning that we learn the most about Zac. That he was a healthy football player before fatigue and slight sores made way for much worse. And that while he tries to remain strong for his ever-present mum and Facebook friends, Zac has his reservations and fears. Especially since he knows what it’s like to not be cured, for treatment not to work the first time round;


I’m told I’m now 99.9 per cent someone else. I’m told this is a good thing, but how can I know for sure? There’s nothing in this room to test myself with. What if I now kick a footy with the skill of a German beer wench? What if I've forgotten how to drive a ute or ride a quad bike? What if my body doesn’t remember how to run? What if these things aren’t stored in my head or muscles, but down deeper, in my marrow? What if . . . what if all of this is just a waste of time and the leukaemia comes back anyway?


Betts also looks at cancer through a modernist gaze, and rather beautifully. Zac has this to say about the social media benefits of cancer;


Cancer is a Facebook friend magnet. According to my home page, I’m more popular than ever. In the old days, people would have prayed for each other, now they Like and Comment as if they’re going for a world record.


And at one point Mia wonders what happens to all the Facebook pages of dead people (and their iTunes music? To which Zac profoundly replies “in the cloud?”). It might date the book if Facebook goes by way of MySpace, but I loved that Betts asked these profound questions of death and grieving in the digital age.

Part one of the book was ‘Zac’ and all from his perspective, part two is ‘and’ and part three is ‘Mia’. Between ‘and’ and ‘Mia’ the story shifts rather monumentally to the outside world and especially onto Mia; who copes very differently than Zac with her cancer. Mia has issues at home and amongst her popular friendship group. She’s used to being desired and desirable, parties and boys are her normal so when cancer interrupts her life she tries to maintain her status quo, with disastrous results. Mia is angry, and for that reason she may not be terribly likeable, initially. But readers will probably find her prickly, mostly because Mia is the antithesis to all those phony portrayals of what cancer ‘survivors’ and strugglers should act like. Zac actually tows the line in many ways; he’s scared but battling and hopeful. Mia is just angry – angry at her mum and the nurses, her stupid leg and the way her seemingly perfect life has been interrupted. She cannot stand the thought of attending her school formal on crutches or in a wig, and she’s going to do all she can to get as far away from reminders of her illness as she can. I liked her. I liked that she ranted and railed to the point of annoyance because she bloody well should be mad at everyone. It’s not fucking fair, and good on her for letting them know it. Of course, Mia can’t run away from herself and what her body is doing, any more than she can try to put distance between her and the problems she’s created.

What didn’t work for me so much was the ‘and’ middle part of the story. I was quite happy for Zac’s beginning to be slow, and I actually quite liked that Betts mirrored the mundane hospital life to introduce us to these characters and set their stage. But I did think the middle dragged a bit; and while I liked Zac and Mia individually, together I was never so sure or entirely sold or quite certain what I was meant to be feeling about the two of them. There was just a bit of a disconnect for me in the middle, and mostly (ironically?) when it was Zac and Mia together the story didn’t work so much for me.

I will say I have a small beef with the cover of ‘Zac and Mia.’ When I saw it, my first thought was “not YA.” Now, having come from Reading Matters and the many legitimate and important discussions surrounding gender-flipped covers, I’m not saying that I think a twee cover featuring a guy and girl in Nicholas Sparks-esque almost-kissing pose would be better. Far from it. But the ‘Zac and Mia’ cover does not work for me and doesn’t lend itself to the incredible and heartfelt story within. Initially I thought maybe the weird Evil-Eye petals would make story-sense . . . but if it was ever explained then it went over my head. Look, someone like John Green can get away with a sparse Rodrigo Corral clouds cover because it’s John Green and his name is the cover (at this point, he could probably even get away with a black cover, Spinal Tap style). But for this really beautiful book about two kids finding each other under the worst of circumstances; I just wanted something more. And something that would let teen readers know this is a book with a lot of heart and heartache. I normally love Text covers and I actually don’t normally comment on book covers at all (unless they’re offensive); but I think ‘Zac and Mia’ has missed out on a lot by going for an unemotional literary look over more accessible and appealing YA, and it pains me to point that out.

‘Zac and Mia’ pulls no punches and offers no easy outs for readers. This is a young adult book about two teenagers in the thick of their cancer battle; examining their boredom and fear, grieving Facebook friends and the infuriating hell of living in a modern age where we can send a robot to Mars but have no cure for what kills close to seven million people every year. Another triumph for the Text Prize, A.J. Betts is in good company and ‘Zac and Mia’ is another great read.