'Every Breath' by Ellie Marney 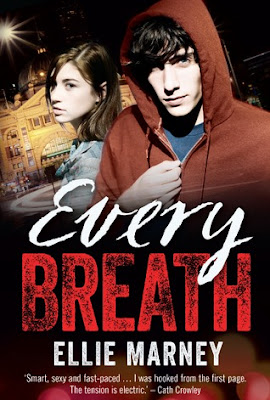 Rachel Watts is an unwilling new arrival to Melbourne from the country. James Mycroft is her neighbour, an intriguingly troubled seventeen-year-old genius with a passion for forensics. Despite her misgivings, Rachel finds herself unable to resist Mycroft when he wants her help investigating a murder. And when Watts and Mycroft follow a trail to the cold-blooded killer, they find themselves in the lion's den - literally.

A night at the zoo will never have quite the same meaning again...

The city is no place for country girl, Rachel Watts. But since her family’s farm was foreclosed she had no choice but to be thrust into the hustle and bustle of the seemingly cold and anonymous Melbourne. Now her life revolves around school and chores while her mum works herself ragged as a cleaner, her dad is never home but always out driving the taxi and her brother frustratingly thrives in any environment.

There’s only one person who has saved this year of transition and stopped Rachel from going completely nutty - James Mycroft. He’s her neighbour and classmate, but over the last few months he’s also become her close friend. She edits the online forensic papers he publishes under the name ‘Diogenes’ and has been absorbed into his friendship group along with Gus and Mai. He might not be big on the warm and fuzzies, but Rachel knows that she’s become as important to Mycroft as he has to her – not least because he’s an orphan and inclined to hermit and drink his problems away.

Mycroft has opened the city up to Rachel, and made this place feel a little less anonymous. He’s even introduced her to some unsavoury characters, and unlikely friends – like Homeless Dave and his not-a-poodle, Poodle. Mycroft met them when he worked a soup kitchen, and Dave has since become one of his many eyes-and-ears around Melbourne.

That is, until Mycroft and Rachel find Dave dead – murdered in a most horrific way.

Mycroft knows that the seemingly random murder of one homeless man won’t matter much to the police, and the disinclined Detective Pickup … so her takes it upon himself to investigate his friend’s death, but he’ll need Rachel’s help to prove foul play.

‘Every Breath’ is the debut young adult novel from Australian author Ellie Marney, and the first in a new series.

This book begins with a prologue that doesn’t inspire confidence. Granted, it’s a prologue that also probably sets-up the trajectory of the entire Mycroft/Watts series … but, still, some of the lines were cheesy and I wasn’t quite sure what I was getting myself into with the book;


Seven years from now, a man will be dead, a case will be opened, and a boy with no past may hold the key to my future.


What kept me reading beyond this somewhat clunky opener was a puff from Cath Crowley (calling the book “smart, sexy, and fast-paced”) and a back cover blurb that invokes a Sherlock Holmes for the Melbourne teen set.

Sherlock Holmes is hot (again) right now. Whether you prefer yours as Cumberbatch or Jonny Lee Miller, New York or London-faithful … it’s irrelevant, when the real appeal behind the “consulting detective” resurgence more lies in reading egotistically smart characters bringing a bit of dignity and drama to the stale crime genre. That’s what Marney is offering up with this new series and the character of James Mycroft (and of course, his partner; Watts).

Mycroft is a wickedly smart and sad young man; he was made orphan when his parents died under mysterious car-jacking circumstances in London when he was a boy. Afterwards he went to live in Melbourne with his only remaining relative, his aunt who is the very definition of a ‘hands-off’ parent. Since the verdict for his parents’ “accidental” death has never sat well wit him, Mycroft has dedicated his life to crime solving. He writes online papers on the topic of rigor mortis and prowls the Internet for ways to put his considerable intellect to good use under the pseudonym Diogenes (yes, the fictional gentleman's club of Arthur Conan Doyle’s books). Never mind that he’s only a teenager; Mycroft’s sad past and cracking mind lend him as a believable amateur sleuth with a chip on his shoulders and a grin at the ready.

The book begins with Mycroft’s smarts having just gotten him thumped by a fellow classmate, and he’s having his wounds tended by the ever-patient Rachel Watts, our story narrator. Though we’re given a brief flashback later in the book, into the early days of Rachel and Mycroft’s friendship, we never get a scene of their very first meeting or what sparked their friendship (though, presumably, proximity was a big factor since they’re neighbours). This is a bit of a lack, and it does take a few chapters for readers to get into their rhythm and accept this unconventional but strong friendship. Rachel has also been living in the city for a few months when the book begins, and I suppose I prefer the sacrificing of a “meeting” scene, as opposed to a time-skip to Dave’s death and Mycroft’s first real case to sink his teeth into. Still, when Mycroft and Watts’s friendship starts hinting at a possibility of more it would have been nice to know of their history up to this point; either to know how unusual it is that their feelings for one another are changing, or to know for sure that this tension has been building for some time.

And the tension is delicious. Mycroft is a charismatic but wounded soul; he has a lot of skeletons in his closet and a childhood that has shaped him into this smart but lonesome young man. Watts, by contrast, is determined to hold her close-knit family together, even in the face of their new and busy city lives – she comes from a place of love and loyalty, and by being around her, these feelings of home and love start having an affect on Mycroft. I also liked the fact that Watts is a tomboy uninterested in outward appearance; similarly, Mycroft is clearly swayed by Watt’s intellect and kindness, and their repertoire is never better than when they’re crunching on the case and observing clues.

I also loved the secondary sidekicks of Mai and Gus, whose additional smarts help Watts and Mycroft out of a few jams and whose forbidden romance is a nice counterpoint to the more grisly aspects of this crime-thriller;

‘Because. . . because you’re teenagers.’ Mai’s expression says it should be obvious. ‘Mycroft, this isn’t like figuring out who spray-painted some guy’s car. This is murder.’

‘The principles are the same’ he insists.

‘But you’re both minors. And you have no access to police information, no experience, no forensics lab, no authority. . . ’

‘Mai, are you trying to bring me down or something?’

Gus, who usually only gets emotive about things like soccer, suddenly leans forward.

‘I think you should do it.’ He glances at me and Mycroft in turn. ‘This homeless guy, it’s not like his death is going to be a major priority, is it? The police won’t bend over backwards to bring his killer to justice or anything. He was a derelict with no family. So you two are the only ones who even care.’


Ellie Marney won the 2010 Scarlet Stiletto competition for women’s crime story writing, and in Mycroft and Watts she is clearly paying a small homage to the most infamous of crime stories - Sherlock Holmes. But this is not a teen-version or even an update; instead, Mycroft is clearly a fan of Doyle’s detective (hence the Diogenes screen name) and Marney plays around with a few jokes about Watts/Watson. But the Sherlock references also take a sharp turn when Watts points out Mycroft’s seeming disconnect from reality and harmful determination;


‘This is about you, it’s always been about you! This is not an investigation! And I am not your Watson! And Dave is not your parents!’

There’s also a feel of Rian Johnson’s 2005 film ‘Brick’ to ‘Every Breath’ – in the gritty urban setting and young sleuths who are more likely to channel Raymond Chandler than Nancy Drew. And I liked that too; this isn’t ‘crime-lite’ because it’s for a younger audience. It’s crime, full stop. The murder is gory, the bad-guys deadly and our characters are putting themselves in very real danger by poking their noses where they don’t belong.

I finished ‘Every Breath’ and wanted more. So I was thrilled to discover that second book ‘Every Word’ (set in London!) is due for June 2014 release, and after that there’s also ‘Every Move’ in March 2015. This is great news, because now that I know them, I want more James Mycroft and Rachel Watts. I want to know what happened to his parents, and how Rachel’s family will stay together in this big city. I want Mai to tell her mum about Gus, and I want to know how someone as smart and troublesome as Mycroft will fare in the big, wide world … I just want more from Ellie Marney, basically. 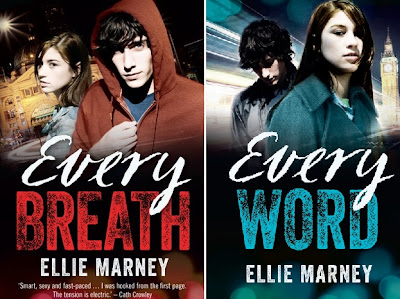