AUDIOBOOK: 'Me Talk Pretty One Day' by David Sedaris, read by the author 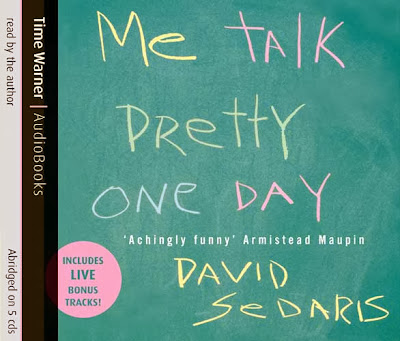 David Sedaris's fourth book mines poignant comedy from his peculiar childhood in North Carolina, his bizarre career path, and his move with his lover to France. Though his anarchic inclination to digress is his glory, Sedaris does have a theme in these reminiscences: the inability of humans to communicate.

The title is his rendition in transliterated English of how he and his fellow students of French in Paris mangle the Gallic language. In the essay "Jesus Shaves," he and his classmates from many nations try to convey the concept of Easter to a Moroccan Muslim. "It is a party for the little boy of God," says one. "Then he be die one day on two... morsels of... lumber," says another. Sedaris muses on the disputes between his Protestant mother and his father, a Greek Orthodox guy whose Easter fell on a different day. Other essays explicate his deep kinship with his eccentric mom and absurd alienation from his IBM-exec dad: "To me, the greatest mystery of science continues to be that a man could father six children who shared absolutely none of his interests."

David Sedaris is an American humorist, essayist, comedian, author, and radio contributor – type his name into YouTube and be prepared to get lost in a vortex of his various bookstore appearances, Jon Stewart and Late Show guest-stars and any number of clips of him reading an essay to peeing-in-their-pants delighted crowd. He’s really, really funny and his autobiographical essay collections came highly-recommended when I let it be known that I was getting into “the audiobooks.” And it’s no wonder, because if you really want to have a fabulous listening experience it doesn’t get much better than a David Sedaris book, because he narrates all his own work. He has to – Sedaris has a high-pitched, lisped North Carolina accent that is surprisingly melodic, and after a few sentences I could not fathom an actor reading his essays and getting their tongues around his quirk storytelling (like singing TV commercials in an Etta James imitation, for example.) 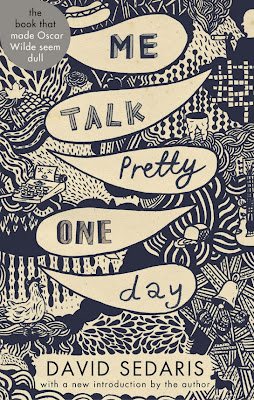 The run time is 5 hours and 51 minutes

‘Me Talk Pretty One Day’ was his essay collection from 2000, based loosely around life-lessons; from the grand to the gross and everything in-between.

In “Go Carolina”, David recounts the day his school speech therapist came for him and began, what would become, a series of torturous lessons to correct his ‘lazy tongue’ and lisp. This, despite the fact that the young speech therapist herself hailed from the Deep South and, as David disdainfully pointed out; “Here was a person for whom the word pen had two syllables.”

Many of the stories are about the year that he moved to France with his boyfriend, Hugh, and had to enrol in beginner French and then harder French lessons. Sedaris describes his broken French tongue as him “speaking Yoda” but revels in the heady fear of being a stranger in a foreign land – things like going to the doctor and describing ailments in lousy French, or becoming the town idiot who only knows the French word for “bottleneck” so repeats it at every opportunity. My favourite of the ‘David in France’ stories had to be “Jesus Shaves”. Involving the recounting of a particular French class when the lesson plan was based around major holidays, and a Moroccan student had to be explained by her fellow classmates what Easter was. Aside from the cultural differences between bunnies and bells, describing the cornerstone of Christianity is hilariously hard to do when you know very little French.


The bulk of ‘Me Talk Pretty One Day’ is about Sedaris and his boyfriend Hugh, and Sedaris’ adventures in French. And no wonder when this chapter of his life was clearly a deep well for personal anecdote. Particularly because it involved the rare occasion of a grown man going back to school and learning the very basics of a new language. And, as many English-speakers who have studied foreign languages will know, a main headache of such learning is no thanks to gender;

I find it ridiculous to assign a gender to an inanimate object incapable of disrobing and making an occasional fool of itself. Why refer to lady crack pipe or good sir dishrag when these things could never live up to all that their sex implied?
— “Me Talk Pretty One Day”


All of Sedaris’ stories are brilliantly funny, and he writes beautifully. Throughout my listening of the audiobook I was struck by certain thoughts and quotes that Sedaris delivers so as to linger. Even mundane musings on why he persists with the typewriter over a computer are delivered with sharp wit;

At the end of a miserable day, instead of grieving my virtual nothing, I can always look at my loaded wastepaper basket and tell myself that if I failed, at least I took a few trees down with me.
— “Nutcracker.com”


But the reason I think David Sedaris is clearly a beloved author for so many (truly, he seems to have a cult-following status) is because he can have you in belly-aching tears one moment, and then ease you into poignancy. My favourite story of all was “The Youth in Asia” (the title is in reference to ‘euthanasia’ but Sedaris is struck by very different imagery when he initially hears the word). This story is initially a recounting of the Sedaris family pets and the histories of their deaths . . . but becomes about the loss of a parent. He read this story on the radio program ‘This American Life’ and I highly recommend it for a listen. Likewise, it has appeared in Esquire. I think I fell a little bit in love with David Sedaris after hearing this story, as I think anyone would.

I thoroughly enjoyed my first encounter with David Sedaris, especially listening to his storytelling via audiobook. I was so enamoured, that when I typed ‘David Sedaris Australia’ into Google and found out he would be touring in January (doing a series of conversations and readings from his 2013 book, ‘Let's Explore Diabetes with Owls’) I snapped up two tickets for his Melbourne appearance.