Interview with Jon Skovron, author of 'Man Made Boy' 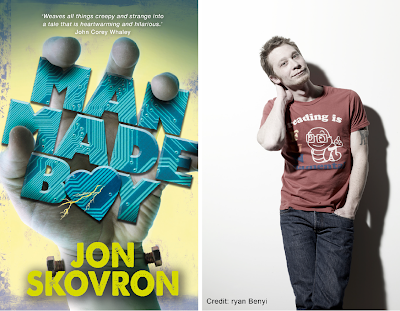 It's Happy Release Day for Jon Skovron's 'Man Made Boy' in Australia - a surprisingly sweet and funny tale of underground theatre monsters and a put-together Boy who's navigating the real world for the first time.

I feel very lucky that I got to ask Skovron some questions about his Shelley inspiration and writing the sorts of books he wanted to read as a teenager.

Well, my very first professional publishing credit was from the slush pile for a (now closed) SF&F magazine called Baen’s Universe. My short story, Baby Girl was about a paranormal private detective who investigates a girl who’s been kidnapped by the Devil. It was basically Shaft meets Supernatural. I had a lot of fun with it and I was thrilled to be included in the same issue as Gene Wolfe, one of my favorite high fantasy writers.

But for my first novel I did have an agent. I sent her a manuscript, she asked for some revisions, and I complied with most of them. She shopped it around, but didn’t end up selling it. In fact, my first published novel was my third completed manuscript. So I guess the moral of that story is, don’t give up! 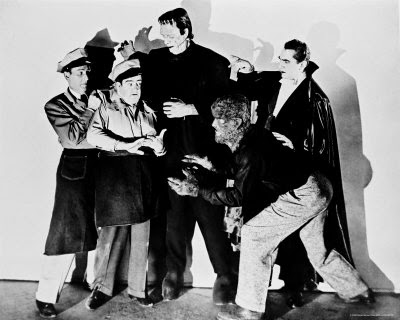 My background is in theater, where I learned the art of improvisation very early on in my training. So the act of writing a rough draft is really one big long improv exercise for me. I generally have a vague idea of where I want to end up and a few spots I want to hit along the way, but I’m often surprised by what comes up. For example, I had originally envisioned Man Made Boy taking place entirely in New York. Clearly, Boy had other ideas. And as my old acting professors used to tell me, always say “yes” to the improv.

Q: How long did it take you to write ‘Man Made Boy’, from first idea to final manuscript?

I came up with the original idea of The Show, a Broadway theater that secretly housed a company of performing monsters, way back in 2005 I think. But at that time, it was just a short story idea. I thought it might be an ensemble piece that took place entirely in the theater. But the more I worked on it, the more interested I became in one particular character’s story. And a hundred pages later I had to admit to myself that it was a novel. I turned in the final manuscript to my editor in 2012, so roughly 7 years. Of course, I was working on two other novels in the mean time. So really, it was five years of pocking at it here and there, and then two years of crazy frenetic writing at the end. But I’m a firm believer in not starting to write the story as soon as you get the idea. It’s good to let it cook for a bit first. 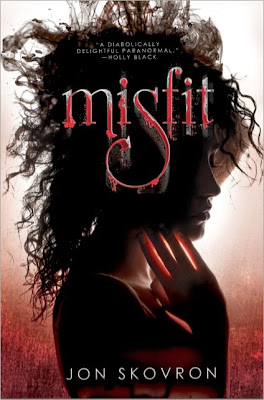 It’s different every time. Sometimes, as with Man Made Boy, it’s the setting. The novel before that, Misfit, it was the character of Jael. The one place I never really start is the theme. I don’t concern myself too much with themes. To me, themes emerge naturally on their own if you’re telling the story right. 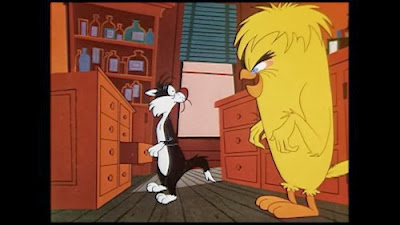 Q: ‘Man Made Boy’ is dripping in classic Gothic horror/romance, featuring characters from Frankenstein and Jekyll and Hyde. When did you first encounter the stories of Mary Shelley and Robert Louis Stevenson? And what was it about them that made you think they’d make for a great YA novel?

Well probably my very first encounter with Frankenstein’s Monster was that old black and white comedy, Abbot and Costello Meet Frankenstein. And come to think of it, my first exposure to Jekyll and Hyde was probably an old Looney Tunes episode where Tweety Bird drinks Jekyll’s formula and turns into this giant monstrous yellow canary and starts beating up on poor old Sylvester. Maybe that’s why Man Made Boy isn’t scary, despite the fact that it’s riddled with monsters. Because my first exposure to those characters was in comedy.

As for why I thought Frankenstein would make a great YA novel, that’s probably because the first time I actually read the book was in my sophomore high school English class. That was when I discovered that the Monster was not this dumb, hulking brute like I’d seen in the films. That he was sensitive, passionate, eloquent, and utterly relatable. It wasn’t his fault that he was ugly and mistreated, an outcast everywhere he went. All he wanted was for Victor Frankenstein to make him one person that he could hang out with. Just one. Victor said he would do it at first, and then went back on his word. So the Monster was given hope, and then had it snatched away. You can kind of see why he went crazy. 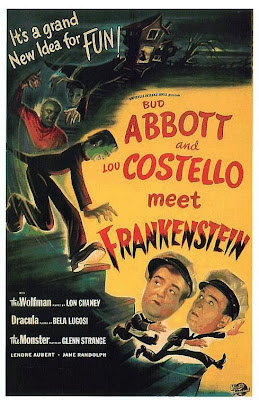 Q: You seem to enjoy writing young characters on the fringe of society - from Boy who hides beneath Times Square to Jael Thompson who is very much a misfit in ‘Misfit’. Why do these kind of characters appeal to you?

I write the books that I would liked to have read when I was a teen. I think we all like to read stories that we can see ourselves in, and as a teen, I was a misfit. I was a sensitive, creative kid raised predominantly by my liberal New Yorker mother in the conservative Midwestern United States, attending a strict Catholic school. This was before the Internet, so really I had no way of knowing that there were other people out there like me. And I just felt so isolated and alone.

That’s probably my favorite thing about book blogs. That even if you live in a small town where nobody cares about books except you, you can still find people out there who are like you. Who value the same things you do.

Even still, I talk to so many teens now who feel alone, like no one in the world gets what they’re going through. And I know first hand what a terrible feeling that is. Mary Shelley, Anne Rice, Neil Gaiman, Edgar Allen Poe; these folks got me through it. So hopefully I can help a new generation of teens get through it.

Q: ‘Man Made Boy’ also has a cinematic feel to it – a mixture of Tim Burton and great, schlocky horror films. Did you watch movies and TV shows to get in the zone and write this novel?

Well, early Burton was a huge impact on my overall aesthetic. Edward Scissorhands, Beetlejuice, those were the films I watched as a kid over and over again.

More recently, I am proud to say that I bravely watched every single Frankenstein-related film that was available on Netflix. Let me tell you, there some brilliantly awful ones and some that are just plan terrible. I think my favorite might be Frankenstein Girl vs. Vampire Girl. It’s Japanese with subtitles and features some of the most artful uses of blood hoses that I’ve ever seen. Just please, whatever you do, don’t watch Rock n’ Roll Frankenstein. Seriously. Don’t. I will never be able to unsee the things in that movie. 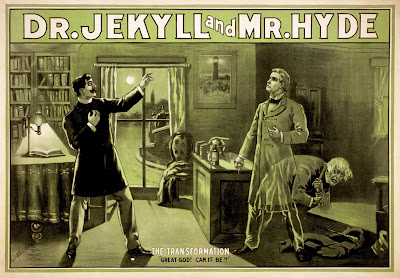 Q: Boy is “ugly”. He’s stitched together and hulking – definitely not your typical romantic lead, which is actually really refreshing. How do you get into such a characters’ head?

Quite easily. I think we all, particularly in our teens, feel somewhat monsterish at times. Maybe not physically, but inside. All you have to do is search on Tumblr for #monsters and you’ll see that roughly half of the posts are about the fear of or struggle with the monster within. So all I did was externalize that with Boy. Make it true on the outside.

Although I would like to suggest that he doesn’t always view himself clearly in the book. Early on, before he’s out among the humans, he doesn’t consider himself ugly. Because next to the Minotaur, he wasn’t. And then when he gets out among the humans, he suddenly thinks, “Oh my god, I’m hideous.” But that’s not really true either. He is, like most of us, somewhere in between. And it takes him a long time to recognize that. I know a lot of adults who still don’t get it.

There are a lot of wonderful things about writing for young adults. One of them is just that those teen years are so intense and charged with heightened emotion. It’s great material to work with. Shakespeare knew that. Romeo and Juliet, Hamlet, Midsummer Night’s Dream, so many of his plays were about teens. They just called them “youths” back then rather than teens.

Another thing that’s great about writing for teens is just how passionate they are about the books they read. I mean, I still get excited about books now, but back when I was a teen, it was on a whole different level. To this day, those books I loved as a teen remain some of the most important and impactful in my life. 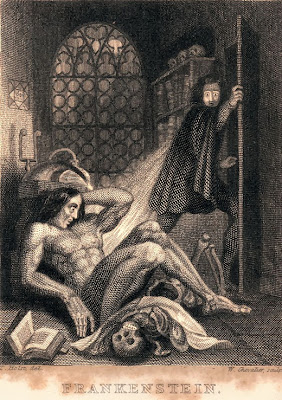 Right now I’m working on the sequel to Man Made Boy. I don’t think I’m supposed to reveal the title yet, but I can tell you that it’ll have just about everyone from the first book, plus a bunch of new crazy/cool monsters. It’s scheduled to hit shelves in the US in early Spring of 2015, and I’m guessing it will come out in AU at around the same time. 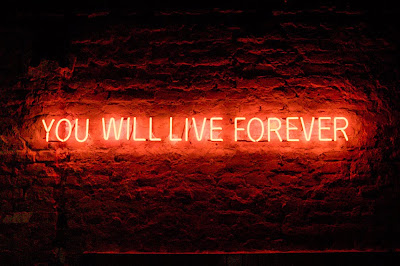 Rather than recap all the great works from everyone I’ve listed about, let me tell you the books I’ve recently read and loved: The Diviners by Libba Bray, Lips Touch Three Times by Lani Taylor, A Chaos of Stars by Kiersten White, On Stranger Tides by Tim Powers, Me and Earl and the Dying Girl by Jesse Andrews, Lola and the Boy Nextdoor by Stephanie Perkins, and I Hunt Killers by Barry Lyga. I’m also a huge comics fan. My current favorite is Saga by Brian K Vaughn. 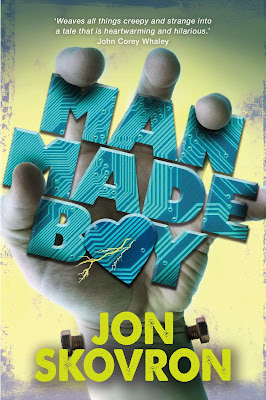 'Man Made Boy' is published by Allen&Unwin in Australia, and out today in all good bookstores!

Email ThisBlogThis!Share to TwitterShare to FacebookShare to Pinterest
Labels: interview, Jon Skovron, Q and A