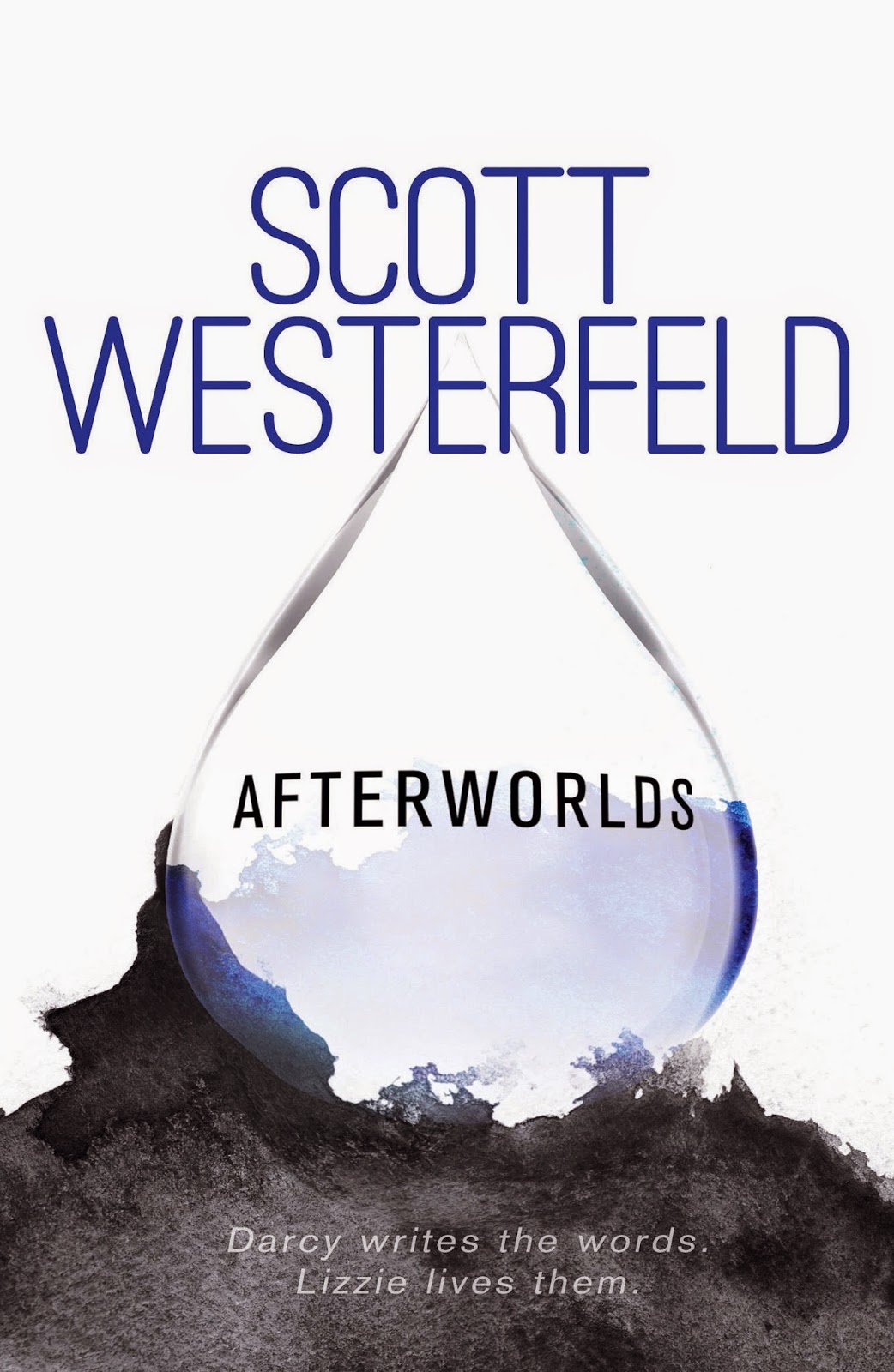 Scott Westerfeld is renowned in the YA fiction market, this is a perfect blend of contemporary love story and fantastical thriller.

Darcy has secured a publishing deal for her three paranormal books. Now she must find the wherewithall to write the second one whilst she has a reprieve from going to college, thanks to her savvy sister. She has enough funds for 3 years in NY... if she eats only noodles every day.

In the story Darcy has written, the character Lizzie survives a traumatic shooting event only to discover that she has become a phsychopomp; a spirit guide to the dead. But she's not dead.. or is she? With one foot in each world, Lizzie's challenges are somewhat unique. Then there's her hot spirit guide... and all those ghosts that keep appearing... and the 'living' friend she usually tells everything to...

More than all I'd seen and heard. It was coming back to life that made me believe in the afterworld.

The tagline for ‘Afterworlds’ reads: Darcy writes the words. Lizzie lives them. Sounds pretty straightforward, right? Wrong. Westerfeld has essentially written a two-in-one novel. First we meet eighteen-year-old Darcy Patel, who has just signed a six-figure, three-book deal with Paradox Publishers for her debut YA trilogy ‘Afterworlds’ … then in alternating chapters we read ‘Afterworlds’, which is about perfectly normal teenager Lizzie who survives a terrorist attack that leaves her with the ability to see a hidden world beneath our own – the world of the dead.

Sound tricky? It’s surprisingly not – the ‘Afterworlds’ chapters are differentiated from Darcy’s with sold black lines at the top and bottom of the page, not to mention Darcy’s chapters are decidedly contemporary, while Lizzie’s story is very much paranormal romance. Both are told in third-person, but are so different in tone and what they’re exploring that you never, ever get confused as to which world you’re in with each new chapter … 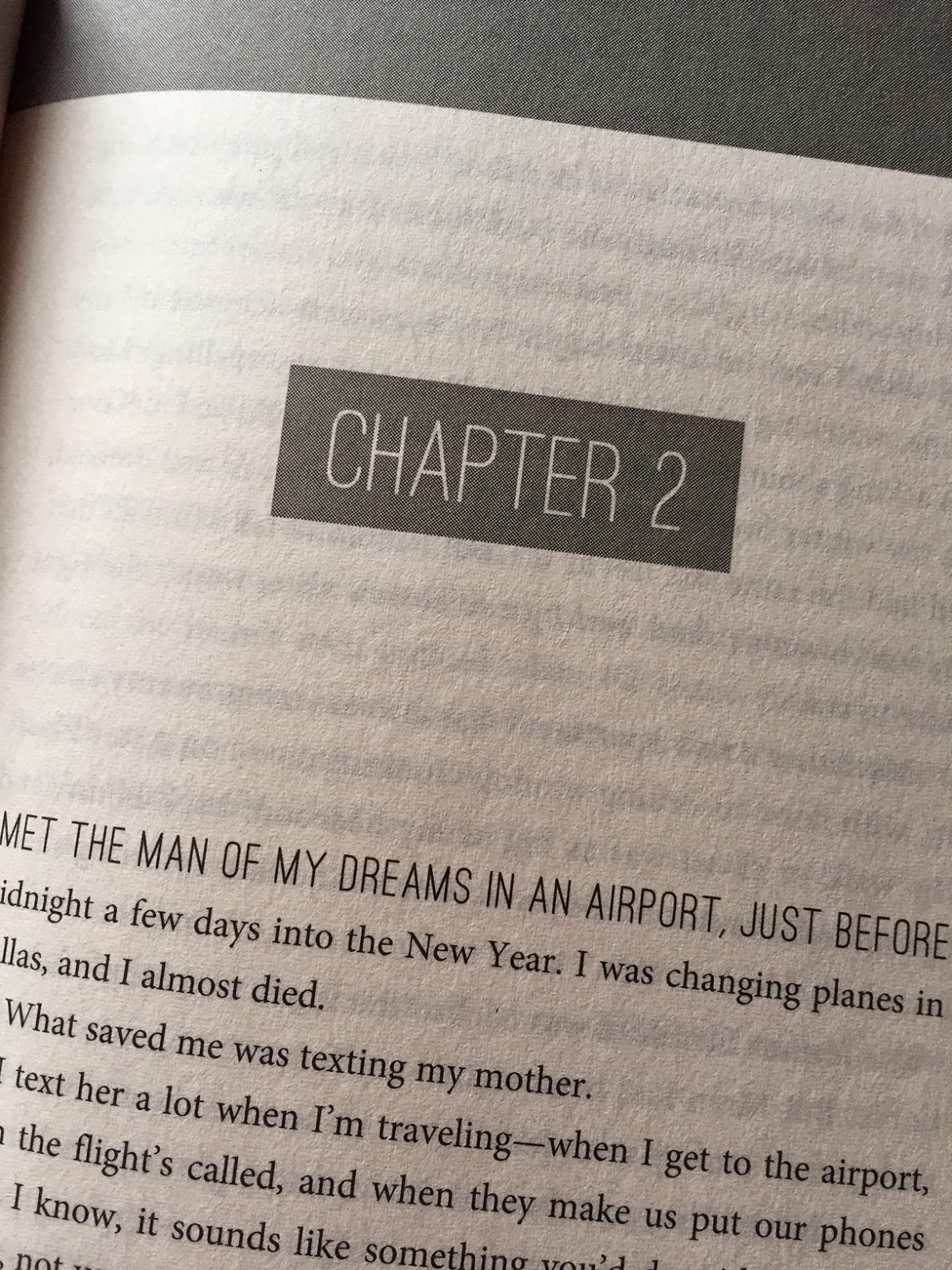 In Darcy’s world, we are bearing witness to a rising new talent in the YA literary world. Darcy is being touted as the new “it” girl of publishing (think Samantha Shannon, Veronica Roth or Sarah J. Maas – all very young first-time novelists who nabbed huge multi-book deals for their debut works) Darcy is so invested in becoming a full-time novelist, that she even defers College for a year to move to New York, home of her publishing house and a city with enough life that she feels sure her creative juices will flow more easily there. Darcy’s first novel ‘Afterworlds’ is to be released in 428-days (her younger sister keeps a countdown) and she has to get through rewrites and edits, and start thinking about plotting the second instalment in the series … but she is the hot new novelist in town, and soon finds herself suckered into the YA writer’s club of NYC. She gets invited to drinks and parties to mingle with the authors she’s grown up admiring – sharing canapés and discussing each other’s new books like it’s no big thing (when she’s squealing inside!). Then she meets fellow debut author, Imogen Gray and soon finds herself swept up in her first ever romance that’s fuelled by creativity and lust in a heady combination that could see Darcy lose sight of why she came to New York in the first place….

Much is being made of the fact that art is imitating life in Westerfeld’s ‘Afterworlds’. He is, of course, at the centre of the infamous YA writers club that Darcy is so awed by. First published in 1997, Westerfeld is the author of successful YA series including ‘Uglies’, ‘Peeps’ and ‘Leviathan’. He’s also married to fellow bestselling YA author Justine Larbalestier … and if you need further proof of his impressive standing in the YA-community, just look at the shout-outs in his acknowledgements: Maureen Johnson, E. Lockhart, Robin Wasserman … not to mention the likes of Holly Black, John Green and Gayle Forman have appeared in spoof ‘attack ads’ promoting ‘Afterworlds’ (and yes, the novel does include a John Green-esque character who’s likewise a YA juggernaut). Westerfeld and Larbalestier have many, many friends in the YA community and are part of many authors’ origin stories – like Melina Marchetta, who has said that the couple offered her their New York apartment as a writing retreat, and it was while staying there that she had the idea for ‘The Lumatere Chronicles’ series (interestingly, there’s an Australian character called Kiralee in ‘Afterworlds’, who I don’t think is Marchetta, but more represents the recent Aussie YA stronghold of the YA writing scene). All of this is very, very fascinating … particularly when Westerfeld gets tongue-in-cheek and somewhat snarky. For instance: Darcy is a little intimidated and annoyed by the ‘debutante’ authors (debut author for that publishing year) who are full of painfully terrible doomsday-advice (like, if your surname isn’t at the beginning of the alphabet for best shelf-placement you may as well be dead!). There are plenty of laugh-out-loud moments that those of us on the fringe of the YA community will get excited over:

“The Printz Award’s that big a deal?”

“Of course! It’s basically a YA knighthood.”

But, fun as all the inner-workings of the YA community are in this book (and real YA- aficionados will totally gobble up this behind-the-curtains peek Westerfeld is offering into our favourite author’s lives) he’s actually doing many great things in ‘Afterworlds’ that deserve praise – both in Darcy’s as well as Lizzie’s worlds.

For one thing, Westerfeld opens up discussion about appropriation in writing through Darcy’s chapters. Darcy is Hindu – or, her parents are – and in ‘Afterworlds’ she’s turned a Hindu death-god into a love interest for Lizzie.

“It’s just, I wanted to have an Indian guy as the love interest, a guy who looks like Muzammil Ibrahim.” They both gave her another questioning look, and Darcy felt embarrassed and young. “He’s a Bollywood actor, a model, really. He’s the hot guy who was never in the paranormals I read when I was little, you know? But I didn’t want it to be about me wanting him.”

“You wanted every girl to want him.” Kiralee was smiling again. “So you chose a white girl from California.”

She didn’t do this with any sort of malice in mind, far from it, but she’s still reluctant to let her parents read the manuscript for fear of their response … and when fellow author Kiralee speaks about her own struggles with appropriating Indigenous culture in her bestselling book, Darcy becomes somewhat panicked by her sudden self-awareness. This is so fascinating on a number of levels – for one thing, I think Westerfeld is questioning if he is appropriating Hindu culture by writing an Indian protagonist in Darcy. He’s also, maybe, asking if he’s appropriating LGBTQI culture … because in Darcy’s chapters we read an unfolding romance between her and Imogen – Darcy’s first ever relationship. It’s really tricky, and I commend Westerfeld for putting the question out there, let alone writing both racially and sexually diverse characters in both his stories. I don’t know what the answer is to the question of appropriation that Darcy is grappling with – but I do enjoy her tussling with the question throughout the book.

I will say that Darcy’s chapters, overall, were stronger for me. That comes down to me really, really enjoying the tongue-in-cheek YA writers scenes, and thinking that Darcy and Imogen’s romance was really strong – I was probably more eager to get back to the contemporary chapters than Lizzie’s paranormal ones, and especially towards the end I got a little frustrated having to return to the fictional world of Darcy’s ‘Afterworlds’. But that’s not to say that Westerfeld leaves all of the theorising in the contemporary world – his paranormal story also throws out some interesting questions, particularly around action-hero/damsel-in-distress conventions:

I stared at her, my breakfast twisting in my stomach. “He’s not like that.”

“I’m sure it doesn’t seem that way, Lizzie. Because in every action movie the girl hooks up with the guy who saves her, like that’s supposed to be normal. But in real life it’d be a pretty messed-up way to fall in love, because your emotions go all haywire when you’re getting shot at. Isn’t it called Stockholm syndrome or something?”

“Um, I think that’s when you fall in love with the terrorist, not the good guy.”

I really can’t get over the phenomenal pacing of this novel. It really is like Westerfeld is conducting a symphony on the page – keeping track of so many players and plots, themes and deeper meanings – and he plays them all beautifully. This is a stand-alone novel (though Darcy has more to write…) and I think it works really well as a one-off. Mostly because I can see how hard Westerfeld must have worked with ‘Afterworlds’, and I can imagine it would have been a gruelling experience he wouldn’t be too quick to rush back into.

I really, really loved this book – a sure sign was that while reading I was getting excited by the prospect of *talking* about this book with other people. Yep, it’s that kinda book.