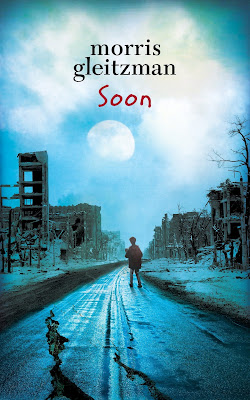 I hoped the Nazis would be defeated.

I hoped the war would be over.

I hoped we would be safe.

Soon continues the incredibly moving story of Felix, a Jewish boy still struggling to survive in the wake of the liberation of Poland after the end of World War Two.

‘Soon’ is the surprise (at least it was to me!) fifth book in Australian author Morris Gleitzman’s incredible ‘Once’ series of books for younger readers … though, as Gleitzman says in a letter to readers at the end, he prefers to think of these as a ‘family of books’ rather than a series, because they can be read out of order or stand-alone.

When we left young Felix in fourth book ‘After’ (way back in 2012) World War Two was drawing to a close. Our young Jewish protagonist had lost much to this war and the Nazi’s – his mother and father, dear friend and faithful companion Zelda and too many acquaintances along the way. When we meet up with Felix and his protector, Gabriek, again in ‘Soon’ the war is indeed over … but danger still looms for Poland.

I’m crazy about this series. I recommend it to everyone I know – young, old, teachers and reluctant readers – Morris Gleitzman’s ‘Once’ series is among this prolific author’s best work, which is really saying something when many of his books have been turned into stage plays and won countless prestigious awards. I know that all the primary school teachers in my family and friendship group (and there are a lot of them!) are particularly grateful to this series, for allowing them to tackle these incredibly difficult subjects in the classroom in a way that kids can both understand, be deeply affected by and still utterly consumed by the story.

Through Gleitzman’s books, these teachers have broached the subject of war, Holocaust, death, persecution and prejudice with very young children for whom this is the first they’re finding out how awful the world can be, and has been in humanity’s dark past. In all my dealings with youth literature, I find that I live by one rule above all others, which Morris Gleitzman said at Melbourne Writers Festival 2012 – “If it’s in the world, it’s for them.”

Because it’s important that kids know these stories, no matter how awful and tragic. I visited Japan last year, and when I went to the Hiroshima Peace Memorial Museum I found this amazing bookshop that sold picture books, graphic novels and chapter books for all ages, across many languages, aimed at children on the topics of World War Two and the atomic bombings of Hiroshima and Nagasaki in particular. Because children, even very young children, have to know these stories so that future generation don’t repeat mistakes of the past.

And that’s really what ‘Soon’ is about. The Soviet Red Army pushed out Nazi German forces from occupied Poland, and readers find Felix and Gabriek at the beginning of Soviet communist dominance at the end of the World War Two, over what had become the Polish People's Republic. Gleitzman is glimpsing the periods of social unrest in the country that was trying to heal the scars of war – and Felix starts to comprehend how nothing takes so long to heal as the horrors of war.

Readers have witnessed the traumas that shaped Felix into the strong, kind man of ‘Now’, and in ‘Soon’ we’re still witnessing that transformation unfold. For Felix in this book, it’s really a push-pull of doing the right thing and still struggling to survive.

‘You want to change the world,’ says Gabriek. ‘That’s natural at your age. But only dreamers try to change things when the world’s in this state. Sensible people know it’s as much as we can do to look after ourselves.’

I know how lucky we are, surviving this long. How lucky I am to have Gabriek’s protection.

‘How do you spot a sensible person?’ says Gabriek.

I sigh. Gabriek says this at least once a day.

‘Sensible people stay alive because they don’t get involved in other people’s business and they don’t take risks.’

And there is a lot of violence in this book - don't be fooled that just because the war is over, this is going to be any less a harrowing story. One event in particular happens concerning a woman, so teachers/parents out there may want to read this book so they can have conversations with children afterwards about what happened. I don't think that means children shouldn't read this book - and I'm not advising that "gatekeepers" keep it away from kids, not at all - it absolutely has place in the story because it is speaking to a very true history of war (past and present, sadly).

This book is Felix coming to the realisation of how wars get started in the first place, when good people who know better stand by and do nothing in the face of other’s suffering. And that’s such a big truth that Morris Gleitzman is presenting to young readers in the tender, beautiful ‘Soon’ that fits so perfectly into this family of books.