'The Foretelling Of Georgie Spider' The Tribe #3 by Ambelin Kwaymullina 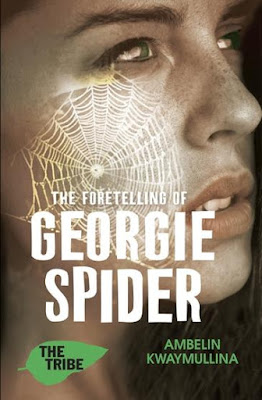 The third and final book in the thrilling eco-dystopian series The Tribe.

A storm was stretching out across futures to swallow everything in nothing, and it was growing larger, which meant it was getting nearer...

Georgie Spider has foretold the end of the world, and the only one who can stop it is Ashala Wolf. But Georgie has also foreseen Ashala's death. As the world shifts around the Tribe, Ashala fights to protect those she loves from old enemies and new threats. And Georgie fights to save Ashala. Georgie Spider can see the future. But can she change it?

‘The Foretelling Of Georgie Spider’ is the third and final instalment in Ambelin Kwaymullina epic YA Aussie dystopian series, ‘The Tribe’.

I have been both dreading and anticipating this book, probably since I first read ‘The Interrogation of Ashala Wolf’ way back in 2012 (OMG!). Because I both didn’t want the series to end, and I also needed to know what happens next … this is the conundrum of any series’ conclusion.

And now I’m on the other side, having closed the final chapter on ‘The Tribe’ and I can say I’m both bereaved and satisfied, languishing in that weird fangirl in-between of being both happy for such a grand finale, and sad that a little fictional universe is now finished for me. And now I’m trying to write a review for ‘The Foretelling Of Georgie Spider’ and I’m struggling to say anything that won’t completely spoil it for everyone else.

So instead I’ll talk about what a gift this entire series has been, and how this final book has rounded it out to a truly superb trilogy that I’ll be re-reading for many years to come, and recommending to everyone.

Y’know, there aren’t many Australian YA books in which our heroine’s warrior cry is: “Let’s go free a detention centre!” And that one line should tell you something about how clever and important an author Kwaymullina is, and what a statement this whole series has been. Read this interview I did with Ambelin back in 2013 (seriously, time – it flies!) to get some ideas of how much this series is a layered science fiction, eco-dystopic saga that also draws on Stolen Generation history and Indigenous mythology, that is all so tied to the Australian natural landscape.

It’s amazing that in one series readers can be confronted with ideas and themes around Australia’s dark history – particularly the oppression of our First Peoples and Indigenous history – and then also be able to connect the sci-fi aspects to global warming and current asylum seeker debates. And that it’s all tied up beautifully in this intense story, about a Tribe of kids who reject the way their world currently is, and truly believe they can change it for the better;

Connor came over to me. He circled his arms around my waist and I leaned back against him with a sigh.

“Fixing the world, Ashala?” he asked. He was watching Em and Jules too.

“Fixing our world,” I replied. “Our Tribe. With any luck.”

Em was still talking, although she seemed to be taking longer breaks between sentences. She’d started to run out of words, and Jules still wasn’t speaking at all. She jabbed at his chest, and I didn’t need to be able to hear her to know what she’d said. Aren’t you going to say something?

Jules caught her hand and finally spoke. Not much, just a couple of words. I knew what he’d said as well. Forgive me.

For a second longer they stood where they were, Jules clasping Ember’s hand and Ember staring at Jules. Then Em tore her hand from his so she could take hold of the front of his shirt and pull his head down to hers for a long, deep kiss.

“World fixed,” Connor said, and I could hear the laughter in his voice. And the regret, for what neither of us had been able to fix.

This final book is a gorgeous crescendo to the whole series – there’s suspense and heartbreak to be sure, but there’s also real enjoyment in looking back through ‘Ashala’ and ‘Ember Crow’ and seeing all the groundwork Kwaymullina has been laying from book #1, and appreciating just how complex this series has always been.

The entire ‘Tribe’ series has been a real gift to this reader, and ‘The Foretelling Of Georgie Spider’ was the sometimes heartbreaking, always thrilling finale I knew it would be. I can’t wait to read whatever Ambelin Kwaymullina comes up with next, I just hope I don’t have to wait too long for it! 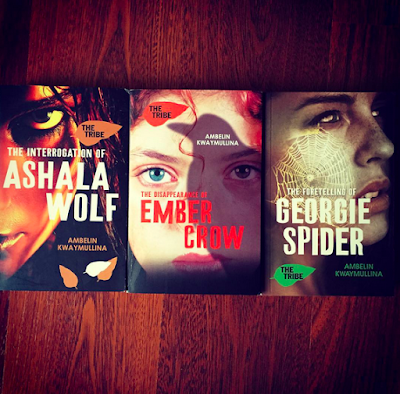