‘Illuminae’ The Illuminae Files_01 by Amie Kaufman and Jay Kristoff 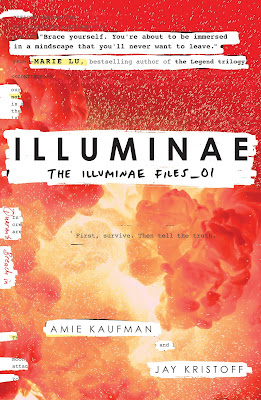 Kady and Ezra thought their break-up was messy until they witnessed their entire world literally falling apart. Now they're are piecing together what's left of their lives, and their romance, and trying to survive an intergalactic war. An innovatively designed story that's best described as Battlestar Galactica meets 10 Things I Hate About You.

The year is 2575, and two rival mega-corporations are at war over a planet that's little more than an ice-covered speck at the edge of the universe. Too bad nobody thought to warn the people living on it. With enemy fire raining down on them, exes Kady and Ezra - who are barely even talking to each other - are forced to fight their way onto the evacuating fleet, with an enemy warship in hot pursuit.

But the warship is the least of their problems. A deadly plague has broken out and is mutating, with terrifying results. The fleet's AI, which should be protecting them, may actually be their enemy; and nobody in charge will say what the hell is going on. As Kady hacks into a tangled web of data to find the truth, it's clear only one person can help her bring it all to light: the ex-boyfriend she swore she'd never speak to again.

‘Illuminae’ is the first book in ‘The Illuminae Files_01’ trilogy, written by Australian young adult authors, Amie Kaufman and Jay Kristoff – two of our most exciting LoveOzYA exports!

‘Illuminae’ is a 599-page book of sheer awesomeness, and one of my favourite reads of 2015. Hands down. It’s an epistolary novel written in classified documents, interview recordings, Wikipedia-like entries and other extravagantly detailed materials … to give you some idea of the scope of the thing, let me just say that ship insignia illustrations were done by Stuart Wade, ship blueprint and schematics by Meinert Hansen and movie poster illustration by Kristen Gudsnuk. And to further blow your mind, know that the audiobook has 20 voice actors. Um. Yeah. It’s space operatic-epic and a real triumph of design and story.

And to that story – it is the tale of two teenagers and recent exes, Kady and Ezra who have lived their whole lives on the Kerenza Colony … their very existence was basically illegal, as Kerenza was mining concentrations of a substance called hermium in direct violation of the law, and only able to do so for their remoteness in the galaxy. But it’s why the Battle of Kerenza came about, and Kady and Ezra’s whole lives blown to high hell by BeiTech Industries who were trying to stomp out their competition and contribute to the ongoing but unspoken Stellarcorp War.

But that’s the Unipedia entry of events; footnotes to the bigger, overarching ordeal. ‘Illuminae’ is really all about Kady and Ezra, two teens with no love lost between them who find themselves pawns in the middle of intergalactic corporate warfare … of which they want no part, but find themselves drawn deeper and deeper into this galactic game of cat and mouse.

Y’know how Battlestar Galactica is actually exploring religion and civil liberty … Or, okay – how Joss Whedon’s Firefly isn’t really just an intergalactic-Western? But rather it’s inspired by the 1863 Battle of Gettysburg and the everyday people who are stepped on in the great moments of history, and that it’s even a story of the immigrant experience and outsiders pushed to the fringe by the victors in a war they never wanted any part of? Yep, okay – well, in the same way there is a lot happening beneath the surface of Illuminae.

The universe was here long before you.

It will go on long after you.

Do something worthy of remembrance.

On the one hand it is indeed “Battlestar Galactica meets 10 Things I Hate About You,” and a fantastically entertaining space opera with explosions and romance to boot. BUT it’s also an incredibly thoughtful and breathtakingly expansive tale of political intrigue and subterfuge, the chilling parallels for which can be found in the real world … need I remind of America’s bombing an M.S.F. hospital in Kunduz city of Afghanistan? (which seems to have already vanished from the headlines and peoples conscience).

What makes Illuminae a particularly hard-hitting, gut-punch of allegory and action is that we are following two teenagers, Kady and Ezra, in this epic fallout of a battle that has forever changed their lives. These two are so relatable and likeable, both for their messy break-up and steely fortitude in the wake of tragedy and disaster. I understand that Illuminae is the first time Jay Kristoff and Amie Kaufman have written characters that share their gender – Kristoff of course has written the bestselling ‘The Lotus War’ trilogy with female protagonist Yukiko, while Amie Kaufman is one-half of the ‘Starbound’ writing duo with Meagan Spooner, it’s Kaufman who writes all the male roles in that series. So with Kristoff writing Ezra and Kaufman Cady, ‘Illuminae’ is the first time they’ve written to their own gender, and the results are kind of incredible. Neither Ezra nor Cady pander to gendered stereotypes – neither is the hero while the other a damsel; instead they take turns saving themselves and each other right back, they are each formidable, and it’s especially worth mentioning that they are angry – gloriously, understandably angry.

There’s also a seriously intriguing element of unreliable narration in this epistolary book, when readers are sometimes forced to consider where a document has come from and who has written it with a hidden/public-relations agenda … and then of course there’s that element to the classified documents readers are privy to, which force you to consider why they were not made public in the first place. I actually think a fair amount of the book can be summarised with the George Orwell quote; “Journalism is printing what someone else does not want printed: everything else is public relations.”

‘Illuminae’ is a seriously impressive coalescence of story and design. And perhaps it is because of how closely aligned the visual and story are, that I kept thinking this was like some sort of graphic novel treat – indeed I’d say that if you enjoy Brian K. Vaughan’s Saga, then Illuminae is the book for you! The narrative is extraordinary, not least for the ways it harnesses the epistolary format to heighten tension, drama and add another layer of intrigue for readers to wade through … it’s actually a novel that has to be seen to be believed.

An absolute favourite of 2015, I can’t wait for the next two books in ‘The Illuminae Files_01’ and I’m just in awe of what Amie Kaufman and Jay Kristoff, two of our best and brightest, have created. The buzz is legit, people – this one is seriously special. 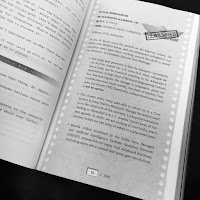 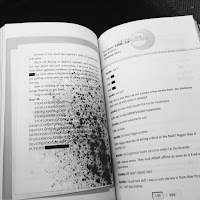 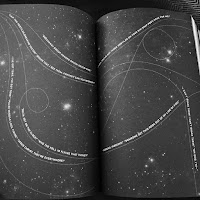 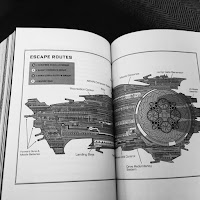