'Iris and the Tiger' by Leanne Hall 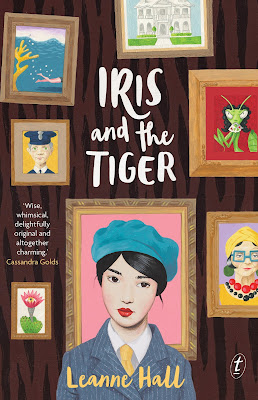 Twelve-year-old Iris has been sent to Spain on a mission: to make sure her elderly and unusual aunt, Ursula, leaves her fortune–and her sprawling estate–to Iris’s scheming parents.

But from the moment Iris arrives at Bosque de Nubes, she realises something isn’t quite right. There is an odd feeling around the house, where time moves slowly and Iris’s eyes play tricks on her. While outside, in the wild and untamed forest, a mysterious animal moves through the shadows.

Just what is Aunt Ursula hiding?

But when Iris discovers a painting named Iris and the Tiger, she sets out to uncover the animal’s real identity–putting her life in terrible danger.

‘Iris and the Tiger’ is the new novel from Australian author Leanne Hall, a magnificent middle-grade magical-realism marvel.

Let me begin my review of Hall’s ‘Iris and the Tiger’ by quoting another book. ‘It’s the things you read at the age you are now which stick. Books crow-bar the world open for you.’ Said to a 12-year-old girl on her birthday, in Katherine Rundell’s beautiful novel, ‘Rooftoppers’.

I love that quote, and the epitome of it is surely in Leanne Hall’s ‘Iris and the Tiger’ which, though labeled as Young Adult, is really a little bit closer to this marvelous readership called Middle Grade (8-12 years, generally). Because I love middle grade literature, and I’m excited to see it grow in Australia where it’s often ignored (I use the example that many State Premier’s Literary Awards don’t recognise children’s literature as a separate category, and often lump it with YA or overlook it completely). But I see nurturing this middle grade readership in Australia as incredibly important, and intrinsically linked to the #LoveOzYA campaign in many ways – this idea that children who grow up reading Australian kids’ books will become teenagers who read Aussie YA, and then adults who read Australian literature.

In recent years, the creation of The Readings Children’s Book Prize (celebrating works of published fiction, written for children aged 5–12) has been an incredible step in recognizing and celebrating this important children’s category – and I’ve written in the past about how brilliant a Prize it is. Particularly that Aussie children and their families now have one more institution to guide them towards quality middle grade fiction – something akin to the prestigious Newbery Medal in America.

I do see middle-grade fiction on the rise in Australia – not just because of the creation of the Readings Children’s Book Prize, but publishers like Hardie Grant have recently adapted their unpublished manuscript prize, the Ampersand, to include MG as well as YA titles. This is an indication and acknowledgment that the more sophisticated YA becomes, likewise the more complex MG has to become to keep up with readers, and to keep enticing readers – and that’s also why I love the fact that one of Australia’s greatest YA daughters in Leanne Hall (of ‘This is Shyness’ and ‘Queen of the Night’ brilliance) has turned her pen to a novel for younger readers with her third book.

‘Iris and the Tiger’ is the tale of 12-year-old Iris – the daughter of greedy parents who send her on a mission to visit her dying Great Aunt Ursula in Spain, purely for the purposes of ascertaining the quality of their inheritance when she croaks. But when Iris arrives she finds herself in the middle of a mystery around a painting titled ‘Iris and the Tiger’, which sets her off on a mission to uncover the painting’s true subject – no matter the danger to her own life.

The magical realism of ‘Iris and the Tiger’ is borne of the surrealism in the paintings that hang at her Aunt Ursual’s Bosque de Nubes. Though eventually the strangeness of the paintings that Iris encounters seem to leak into the real-world and the goings-on of her Aunt’s strange and fantastical life …

A painting hanging nearby flickered. It showed an underwater scene, a rush of water, bubbles and waving water plants. There were two pink legs in the lower right corner. The legs kicked – once, twice, three times – before swimming out of view, beyond the edges of the painting. One second they were there, the next they were gone.

‘Iris and the Tiger’ has a little bit of mystery and suspense, and explores the cultural shake-up for Iris who befriends neighbor boy Jordi. But what makes this novel a real jewel in the crown for young readers, is it’s awakening of magical realism. It’s such a beautiful genre, but one that children rarely encounter the nuance of in the middle grade readership, which tends towards contemporary or fantasy but rarely a blend of the two.

She pictured a golden head with golden eyes and pricked ears, somewhere in the house. A striped body prowling down the curling staircase, out the front door and into the forest. Tail flicking as it moved beyond the edge of the painting and out into the real world. The tiger, doing exactly as it pleased, not caring in the slightest about the rules that should have kept it on the canvas.

I really commend Leanne Hall for bringing her magical realism touchstone to her first foray into middle grade. In her YA novels – ‘This is Shyness’ and ‘Queen of the Night’ – she adapted that magical realism to an urban setting with fantastically wicked results. In ‘Iris and the Tiger’ I loved that she was using art and surrealism to introduce younger readers to this beautiful genre – it kind of reads like the first time someone sees a Dorothea Tanning painting, and they’re just cracked open with all the possibilities. I also really appreciated Hall’s setting her story in Spain – it’s an ode to the rich Latin American origin and history of fabulism, and I envision young readers growing up to one day read the likes of Isabel Allende, Laura Esquivel, Gabriel García Márquez and so many more, and thinking back on their first encountering the genre with Leanne Hall and ‘Iris and the Tiger’.

This is a very special book, by a vibrant Australian author. I love that younger readers get to experience the writing of Leanne Hall, and I especially love that ‘Iris and the Tiger’ will also surprise and delight older readers alike. I loved this book – from that gorgeous Sandra Eterovic cover-art, to the story within that certainly ‘crow-bars the world open for you.’
Just – stunning.