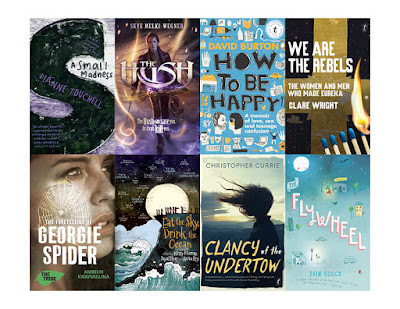 Last night I had the great honour of being a guest speaker at the Children's Book Council of Australia (CBCA) Clayton's Night - from their website;

Clayton’s Night is held annually in the month before the official CBCA shortlist is announced.

Guest judges are asked to look at the entries from each year and pick a personal ‘best of’. They don’t have any correspondence with the official judges, and their selections are their own. In addition, each of the guest judges only presents books in one of the five national categories: the three age-based categories – Older Readers, Younger Readers and Early Childhood – and the two general categories – Picture Book and Eve Pownall.

So I went along with my six-book selection (plus two 'notable' titles I also wanted to sneak in there) and thought I'd share with everyone what I picked and why. So here you go, in no particular order - my Clayton's 2016 Older Readers 'Best Of' Selection (which was super hard to do, btw!):

1. A Small Madness by Dianne Touchell

This is a novel that deals with themes of teen sex, pregnancy, teen-parent relationships, isolation, friendship and mental illness. A novel about characters who do something monstrous – but beg our forgiveness.

Rose and Michael started dating, “almost by accident,” but when we first meet them they’re having sex for the first time because they’re in love and ready. Afterwards Rose can’t believe that nobody can tell how changed she is, now suddenly a woman. Michael wants to know when they can do it again.

When I received this book from the publisher, the press release included a few paragraphs from Dianne Touchell on her inspiration for ‘A Small Madness’. She said that while living in the United States a few years ago she was “moved and disturbed” by news coverage of a particularly awful discovery, and it had stayed with her ever since. “Society gathered their metaphoric torches and pitchforks,” for a couple who had done a very bad thing, and her heart just broke for them. It was that news story that led to Touchell exploring similar themes in ‘A Small Madness’, particularly this idea that; “being damaged is very, very different to being evil.”
2. The Hush by Skye Melki-Wegner

Sometimes the best books are those that you never knew you always needed in your life. This book came recommended to me from the author Amie Kaufman – who you can assume, knows a thing or two about good sci-fi and fantasy.

In this stand-alone novel, music is Magic – literally – and to connect to song without a licence is a crime punishable by death … as we see in the opening chapter, with an axe falling on a fiddler.

Melki-Wegner says that The Hush was also inspired by folklore, mythology and philosophy – and she’s peppered the book with references that astute readers can go forth and learn more about.

There are allusions to; Mozart’s The Magic Flute, The Pied Piper of Hamelin, Greek mythology music-makers, and Plato’s Allegory of the Cave speaks to the idea of false realities and layers of deception (including self-deception).

This book is so good, it will stay with you long after the last page – like a song you can’t stop humming.

3. The Foretelling of Georgie Spider (The Tribe, #3) by Ambelin Kwaymullina

‘The Foretelling Of Georgie Spider’ is the third and final instalment in Ambelin Kwaymullina epic YA Aussie speculative fiction series, ‘The Tribe’.

Y’know, there aren’t many Australian YA books in which our heroine’s warrior cry is: “Let’s go free a detention centre!” And that one line should tell you something about how clever and important an author Kwaymullina is, and what a statement this whole series has been. This series is a layered science fiction, eco-dystopic saga that also draws on Stolen Generation history and Indigenous mythology, that is all tied to the Australian natural landscape.

It’s amazing that in one series readers can be confronted with ideas and themes around Australia’s dark history – particularly the oppression of our First Peoples – and then also be able to connect the sci-fi aspects to global warming and current asylum seeker debates. And that it’s all tied up beautifully in this intense story, about a Tribe of kids who reject the way their world currently is, and truly believe they can change it for the better.
4. How to Be Happy: A Memoir of Love, Sex andTeenage Confusion by David Burton

NOTABLE: We Are The Rebels: The Women and Men Who Made Eureka by Clare Wright's

I’ve read some fantastic Australian young adult non-fiction recently. A particular breed of book I’m told some booksellers and librarians don’t quite know what to do with … insofar as, which shelf do they stock it on? The first was Clare Wright’s We Are the Rebels: The Women and Men Who Made Eureka – an abridged teen edition of Wright’s 2014 Stella Prize-winning The Forgotten Rebels of Eureka.

The second was David Burton’s How To Be Happy.

Both are fantastic, feminist and non-fiction. And I can only say that regardless of shelf-placement; I hope they get into the hands of teen readers (and in the case of We Are the Rebels, maybe school history teachers too!)

One of the big themes of David Burton’s memoir is on smashing gender stereotypes – as he recounts his youth as a socially awkward teen who didn’t fit into Australian society’s “machismo” stereotype of a sport-loving, rough-tumbling manly man, David discovered his voice through the self-expression of drama class … and then struggled with what it meant that he was drawn to inherently “feminine” pursuits and activities.

The other big focus of David’s book is topics of mental health – his brothers’ unique Asperger view of the world, his and his family’s history of depression and a close friend struggling too.

This book is gold, and if I could I’d make it mandatory reading in schools … or, maybe, not in schools but mandatory under-the-covers with a torchlight, late into the night reading for all those teenagers wondering why they feel this way, when will it get better and does anybody understand me? For those teenagers I’d like to gift them ‘How to be Happy’ – because David won’t claim to have all the answers, but he’s been through the trenches and written about it in all his embarrassing teenage glory.

The stories within this book are wonderful – not least for their variety. It’s a collection of sci-fi and fantasy writing, including six graphic stories showcasing some of the most exciting writers and artists from Australia and India.

Female experience is central to the anthology but there are stories that investigate the effects of sex bias in the lives of boys and men.

It’s a book full of funny, thoughtful and subversive stories – the kind of book I’d happily get up on a soapbox for.

But the reason I wanted to talk about it with you all tonight; is for the story behind the anthology.

As the introduction explains; the concept for this book was borne in late 2012 – at that time in Delhi, thousands protested against rape, while in Melbourne thousands stood vigil in memory of a young woman raped and murdered while walking home one night. ‘The fate of all young women, what they should fear and what they can hope for, were hot topics in the media around the world. Out of that storm rose the idea for this anthology.’

I think this book is a wonderful example to young people, of how art can grow from tragedy – the light of imagination illuminating a world that sometimes seems so dark.
6. Clancy of the Undertow by Christopher Currie
NOTABLE: The Flywheel by Erin Gough

A book with a lesbian protagonist, growing up in a rural small town whose already dysfunctional life is thrown into chaos when her father is involved in an accident that kills two local teens and the family suddenly finds themselves local enemies No.1

‘Clancy of the Undertow’ feels like it could be a Paul Kelly song – all hard knocks Australian setting and moral questions, being told by a young woman stuck in the middle of her life.

Currie has written about his transition from an Adult author to a Young Adult one – saying he stumbled across his 15-year-old protagonist, and then didn’t stop writing once he found her …

By contrast, Erin Gough found the teen character in her debut book The Flywheel rather deliberately.

I’d like to paraphrase form an article Gough wrote for Kill YourDarlings last year; ‘I wanted to have a lesbian main character. Not only did I want her to be a lesbian; I wanted that to be no big deal for her – or maybe a bit of a deal, but manageably so … The problem was I didn’t know how to write the story of a character who was at ease with and open about her sexuality, because I didn’t have that for myself … I’d certainly never come across any as a young adult, not even in a Judy Blume book. And then finally, around 2011, with a lot more writing and living under my belt, I was ready for the task: to write that story for my young adult self – the book I’d wanted to read when I was younger, but which hadn’t existed.’

Whether the characters were written by accident or design, I loved these two books, I loved Clancy and Delilah – and I especially loved the thought that some teen readers out there would find them, and maybe not feel so lonely.

I also did a wee spruik of the just-launched official LoveOzYA website - I encouraged everyone to go visit, submit content, find out about news & events, or just tell us what's missing or what's great about the site - we want feedback! That goes for everyone reading this too :) 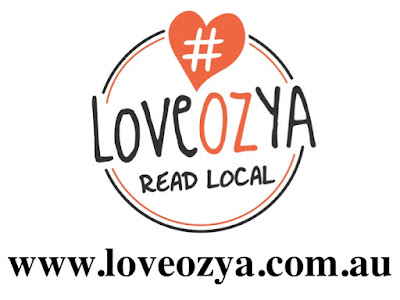