'Anything for You' Blue Heron #5 by Kristan Higgins 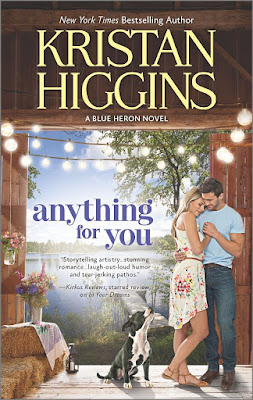 Before you get down on bended knee…

…you should be pretty darn sure the answer will be yes. For ten years, Connor O'Rourke has been waiting for Jessica Dunn to take their on-again, off-again relationship public, and he thinks the time has come. His restaurant is thriving, she's got her dream job at Blue Heron Vineyard—it's the perfect time to get married.

When he pops the question, however, her answer is a fond but firm no. If it ain't broke, why fix it? Jess has her hands full with her younger brother, who's now living with her full-time, and a great career after years of waitressing. What she and Connor have is perfect: friends with an excellent benefits package. Besides, with her difficult past (and reputation), she's positive married life isn't for her.

But this time, Connor says it's all or nothing. If she doesn't want to marry him, he'll find someone who does. Easier said than done, given that he's never loved anyone but her. And maybe Jessica isn't quite as sure as she thinks…

‘Anything For You’ is the fifth book in Kristan Higgins’ contemporary romance series, ‘Blue Heron.’

This book is about a character we first met and had the most dealings with, way back in first book ‘The Best Man’. Jessica Dunn was the girl with a reputation who gave Faith Holland a hard time in school, and was the frequent bed partner of Levi Cooper. Jessica is the heroine of this instalment, paired with Connor O'Rourke who is the owner of local restaurant O'Rourke’s and twin to Colleen (‘Waiting on You’).

‘Anything For You’ actually kicks things off with Connor proposing to Jessica, and her turning him down. It starts with them breaking up – and then backtracks to explain their rollercoaster, secret relationship over the last few years. The lengthy flashback chapters also reveal what we barely scratched the surface of in ‘The Best Man’, knowing that Jessica was raised in the same trailer-park as Levi – daughter to two alcoholic parents, and big sister to Davey who was born with Fetal alcohol spectrum disorder (FASD).

I really, really loved this instalment. Jessica was such an interesting heroine – she’s always used her beauty to her only advantage, strategically sleeping with popular guys in high school to ensure they’d look out for her brother Davey and make sure he was never hassled. Now as an adult, she’s in a position of not being able to shake her small-town reputation as “Jessica Does,” and is always wary when good things come her way through sheer talent and brains – she’s currently working at the Blue Heron vineyard as their publicity manager, but is always on-guard thinking she’ll be fired any day now.

She and Connor, we discover, have had a rocky relationship. As kids he was attacked by her family’s dog and nearly died, resulting in the dog being put down and Davey holding a life-long hatred and fear of Connor and the O’Rourke name. This throws a serious banner in the works when Connor and Jess reconnect years later and try to make a go of it … because Davey is her whole life, ever since her mother died and father did a runner, she’s his primary carer (and has been since she was a kid herself) and she always wants to put him first.

The other thing about Jess is – she can’t believe Connor could want to be with her beyond a one-time fling or secret relationship. Jess is used to being desired and discarded, and Connor’s intensity plus promises of commitment intimidate the hell out of her;

He kissed her again, more gently this time, and her fingers found their way into his thick, wavy hair. “You’re not easy, Jessica Dunn,” he murmured against her mouth. “You are not easy.”

“Actually, I am. That’s the problem.”

Connor is also an interesting character for his family history – a father who was always distant, until he ran off with a much younger woman and started a second family with her. ‘Anything For You’ plays out against Connor’s twin, Colleen, ready to pop with her first baby – and his father reaching out and wanting to know how they can mend their relationship.

I really loved this instalment. This book just reminded me why Higgins is one of the best – Jess starts out quite cold and unlikable, and then Higgins peels her layers away and by the end readers are right there with Connor in understanding why she’s worth fighting for and convincing of her own worth.