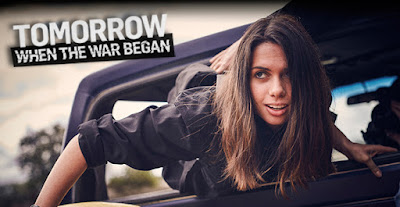 Celebrating end of year, Ellie takes her friends on a trip to a remote destination called 'Hell'. They return home to find their parents are missing, the phone network down and homes ransacked.

The first book in John Marsden’s ‘Tomorrow’ series, ‘Tomorrow When The War Began’ was first published in 1993. It became one of the most popular young adult series in Australia, concluding in 1999 with seven books in the core series, followed by a spin-off trilogy called ‘The Ellie Chronicles’ which ran from 2003-05. The series is a fictionalized account of an invasion of Australia by unknown (but usually vaguely Asia-Pacific) foreign forces, and the microcosm of a small town called Wirrawee and a group of local kids who are camping in the bush when their town is overrun with enemy combatants, and upon their return they decide to fight back against the invasion. The first book of the series was turned into a highly successful Australia film in 2010 – starring Caitlin Stasey as protagonist Ellie Linton – and it ranks number 17 on the most successful Australia box office films of all time, thus far. After the success of the 2010 film fans eagerly awaited a sequel – certain that the film’s popularity would guarantee a franchise. And while there was a nebulous promise that the story would continue, it was never clear if that would be as film or TV series (and when the likes of Caitlin Stasey and Phoebe Tonkin from the 2010 film went onto great success in Hollywood, Australian fans were pretty certain the original cast wouldn’t be reassembled).

Then it was announced last year that ‘Tomorrow When The War Began’ (affectionately abbreviated and hashtagged to #TWTWB) would be coming to our small screens on ABC TV! This was huge news, extremely well-received. You really can’t underestimate what a beloved book series Marsden’s TWTWB is – becoming a staple of every Aussie teenager’s reading life. And it’s a series worth celebrating across generations – a series about teenagers taking matters into their own hands and fighting back, surviving on their wits, cunning and each other. It’s also a very nuanced series; with themes of man vs. nature, the morality of war and survival, and so much more.

TWTWB re-launching as a TV series at this point in time feels extremely appropriate, as refugee and asylum seeker debates rage in Australia and our Government seems to lack any comprehension of what has been happening (and is still at crisis-point) in places like Syria.

Watching the first episode of TWTWB, I’m reminded of this quote that’s been borne out of the refugee crisis – Just because it’s not happening here, doesn’t mean it’s not happening. Echoed in this stunning British ad, which imagines war breaking out in the UK. This was another strength of Marsden’s TWTWB series – to ask one of the biggest what if’s? of young Australia readers. What if we were invaded? What if your family was locked up? What if you had to pick up a gun and fight back?

The first episode of TWTWB has brilliant duality to set-up the entire first installment of the book series. There’s a very clear before/after being introduced in this first episode as we see the core cast of seven pack up their camping gear and get ready for a trip into ‘Hell’ – a beautiful, secluded section of bushland. Their town of Wirrawee is celebrating a state fair with all the dressings, and they wave goodbye to the euphoric town as they take the track that leads them into the wilderness, for five-days of escape. But upon their return, Wirrawee is completely changed to a dark, barbed, battle-ground, and the end of this first episode does cover a pivotal moment for Ellie (Molly Daniels), when she is forced to defend herself and her friends.

It may seem like this first episode covers a lot of the first book’s content – but there’s plenty more to come in this six-part miniseries (and I’m not sure how deep into the book series the TV show will even cover, but I hope we get more seasons!). Aside from the eerie set-up of war (and there are some beautiful scenes, setting up the devastation) the characterisation in this first ep is spot-on. We very succinctly get the closeness and fractures beginning to show in relationship of best friends Ellie and Corrie (played, refreshingly by Madeleine Madden – who is also Zoe Preston in ABC3’s other brilliant series, Ready For This). Town larrikin Homer (Narek Arman) and posh new girl, Fiona (Madeleine Clunies-Ross) have nice push-pull chemistry. Fi’s parents (lovely to see Sibylla Budd as her mum, I’ve liked her since The Secret Life of Us!) are written to be a little closer to the political action it seems, and the hostile family environment is a clever touch. Robyn (Fantine Banulski) clearly has an unreciprocated crush on Lee (Jon Prasida) – and the fact that all this character chemistry is oh so subtly communicated in the first 46-minute episode is quite an impressive feat.

This is a fantastic start to a much-loved Aussie series. I got goosebumps just watching the brilliant opening-titles sequence, to be honest (and I was reminded that before Veronica Roth’s post-apocalyptic Chicago ferris wheel in Divergent, Aussie readers had the iconic Wirrawee wheel, a leftover relic of the fairground before the war began!).

I also can’t help but think that re-franchising TWTWB as a TV series is a smart move – not least because other book-to-film franchises (okay, American ones – but still!) have been experiencing fatigue around multi-installments. It’s also not insane to think that other popular YA series enjoying success right now (again, American, but stick with me!) like The 100 – about a group of kids all alone without adult supervision and up against enemy combatants – that it’s a good idea to give Aussie teens their own version of this compelling survival story. I’ve long been asking where all the great YA TV adaptations are, and I’m thrilled that we now have ‘Tomorrow When the War Began’. It’s such a layered, subversive and complex book series – and from the looks of episode one that’s all going to translate beautifully to the small screen.


The series airs on Saturday's at 7:30pm