'Against the Wall' by Jill Sorenson 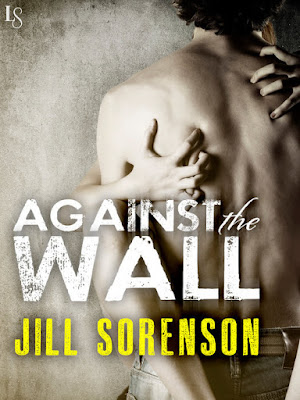 The RITA-nominated author of The Edge of Night returns with another seductive novel, hailed by M. O’Keefe as “a dirty, gritty gem of a book.” As teens, Eric and Meghan fell for each other despite the odds—but now that they’re all grown up, they’re reunited by dangerous secrets.

Eric Hernandez is the bad boy of every schoolgirl’s fantasies—and every mother’s nightmares. But after serving time for manslaughter, he’s ready to turn his life around. He just needs a chance to prove himself as a professional tattoo artist. The one thing that keeps him going is the memory of the innocent beauty he loved and left behind.

Meghan Young’s world isn’t as perfect as it looks. The preacher’s daughter is living a lie, especially now that Eric is back. Tougher, harder, and sexier than ever, he might be the only person she can trust. But there’s no telling what he’ll do to protect her if he learns the truth, and that’s a risk Meghan won’t let him take. And yet, back in the arms of the troubled boy with the artist’s soul, Meghan can’t help surrendering to the man he’s become.

‘Against the Wall’ is the long-awaited sequel to Jill Sorenson’s 2011 romance book, ‘The Edge of Night’.

Okay. I hate that I didn’t love this book. Because I really liked ‘Edge of Night’ when I read it waaaaaay back in 2011, and in my review of that book I plucked out my enthusiasm for the secondary romance of Meghan and Eric, as much of that book’s saving grace. So much so that I actually reached out to Sorenson to see when their book would be coming … at the time I think she alluded to a possible next-year release – but for various reasons that kept getting pushed back and back, and it’s by the grace of the reading gods that I kept checking in every couple of years to see if that sequel status had changed (seriously – the waiting was getting up there with Lisa Valdez’s ‘Passion Quartet’ third book…) So imagine my happy surprise when I did my annual end-of-year check-in and saw that the sequel dropped in February of this year!

I delved into the novel full of expectations and enthusiasm, and things started out okay? … but then it got wonky.

When we met Meghan and Eric in 2011 as a secondary teen romance in ‘Edge of Night’, their story was reminiscent of ‘Perfect Chemistry’ by Simone Elkeles … if Brittany and Alex’s happy ending had been totally flipped on its head, and Alex had ended up in jail for manslaughter (because witnesses to the crime mislead investigators). So when ‘Against the Wall’ begins, its been three years and Eric is getting out of prison to discover Meghan has moved on with an abusive college beau. Thus begins the book’s many false-starts and dead-ends … because ‘Against the Wall’ almost reads like a “Choose Your Own Adventure Novel” for how many different pathways Sorenson sets up for the plot, but lets fall away one-by-one.

For one thing – I don’t know why it’s only been three years since Eric’s imprisonment? Why not build on the momentum of the anticipation for this novel and make it five?! This would have also seriously raised the stakes – if Meghan hadn’t just been in her first serious relationship with a college dude-bro, and instead was maybe engaged to someone and in the middle of building her career when a convicted felon jeopardizes her “good standing” in work or something? I don’t know. I felt Sorenson’s insistence to keep this kinda college-based and New Adult was for the sake of it, and it’s where opportunities were missed early on.

As to that “Choose Your Own Adventure” vibe. Phew. Okay. First there’s the fact that Meghan has an abusive boyfriend … but it seems that Eric’s reappearance in her life is what really pushes him over the edge, and everything prior was heavy emotional abuse and isolation – but clearly leading into something dire. Again though, the stakes weren’t’ quite there – because Meghan repeatedly admits to not being in love with him, and between her Psychology major and having a brother who is a police officer, we get Meghan’s inner-thoughts which reveal an acute understanding of what Chip is doing, and her recognition that it is indeed abusive and she needs to leave him eventually. Also: this storyline ends up going absolutely nowhere.

Then there’s the fact that Meghan and her best friend Kelsea work at a college campus women’s centre, where they do things like organize a SlutWalk and field vile online abuse that comes via their website and call-centre. In the lead-up and following the successful SlutWalk, the centre receives even more abuse that seems targeted at Kelsea directly and becomes increasingly scary … again, the storyline goes nowhere in this book, as it’s really more about setting up a future story for Kelsea and a tattoo artist called Tank.

Then there’s everything that Eric is dealing with – among them, sleeping with the girlfriend and baby-mama of the man he killed and was sent to jail for manslaughter over. This was an interesting turn early on, and I was intrigued to see it explored, weirdly. For one thing, we got to see but a glimpse of what it’s like for women within California gangs and there was serious emotional high-stakes … but again, it peters out.

There’s also stuff with Eric feeling sucked back into his old gang life because of his best friend, Junior – but this was also lacking emotional punch because Eric is so determined not to get drawn back into that life, and his interior thoughts tell readers that’s never at risk of happening anyway. This also feels oddly unresolved and half-assed.

What I really found interesting and wish Sorenson had focused on, was how freakin’ hard it is for Eric to get back to life after prison – because if you don’t already know, the American prison system is fucked (seriously, watch the documentary ‘13th’) and Eric alludes to this quite a few times;

I didn’t have any trouble getting my GED in Chino, though. I’m not a dumbass like some criminals. I was born here and I learned English right off the bat. I can read and write better than most inmates. As a convicted felon, I’m not eligible for government programs like housing assistance or financial aid, but I could save money to pay my own way. I could continue my education. Get an art degree.

I glance around the library guiltily, as if someone might guess my thoughts and rat me out for overstepping my place. Guys like me don’t become college students. We beat up college students.

But he falls on his feet kinda quickly. Between having a place to crash at with family who love and support him, and nabbing a pretty sweet job working at a tattoo parlor, plus finding outlets for his artwork … there were never any stakes here either.

And as for Meghan and Eric – the romance that made me check back in for FIVE FREAKIN’ YEARS to see if it was written yet … meh. The sex scenes were great, but I feel like because the plot was all over the place, they were too. I never really knew how they felt about each other; also because their thoughts belied their actions and whatever hurdles Sorenson was trying to construct for them, they just seemed to jump over easily because they had great sexual attraction and that cured all manner of doubts? I mean … even Eric stupidly sleeping with the baby-mama of the man he killed who’s also affiliated with a rival gang when he says he doesn’t want anything to do with that violence anymore – Meghan is momentarily horrified at his stupidity, but because that storyline for Eric didn’t go anywhere, it likewise didn’t carry much weight when Meghan found out.

I just … I feel like ‘Against the Wall’ didn’t actually have an editor? Because I think any beta readers would have come in and said “You’ve already set up emotional high-stakes in ‘Edge of Night’ for these two, they already have a story – you just need to pick a lane for the plot to be in, and stick with it!”

Yeah, this was disappointing. It just had so much potential, and as a reader I was totally there for Sorenson, Meghan and Eric – I was rooting for them and this book for so, so long. But this was a mess … a hot mess, to be sure for those sex scenes (which is the only reason this isn’t get a 1-star) … but a hot mess nonetheless. Sorry.