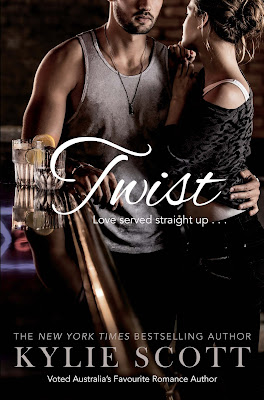 From the BLURB:
When his younger brother loses interest in online dating, hot, bearded, bartender extraordinaire, Joe Collins, only intends to log into his account and shut it down. Until he reads about her.

Alex Parks is funny, friendly, and pretty much everything he's been looking for in a woman. And in no time at all they're emailing up a storm, telling each other their deepest darkest secrets ... apart from the one that really matters.

When it comes to love, serving it straight up works better than with a twist.

She has become one of my go-to, insta-buy romance authors and – without fail – whenever I’m in a reading rut, I can rely on one of her books to pull me out. That’s what ‘Twist’ was for me – not only the next book in a series I was already invested in (not least because I was severely in love with the originalseries that ‘Dive Bar’ is a kinda spin-off from) but it’s a book that pulled me out of a reading slump, partly induced by the God-awful world events and politics we’ve been lambasted with since … oh – about January 20th of this year?

‘Twist’ is about a Seattleite graphic designer called Alex, who has met her match on an online dating site. She’s been chatting with an Idahoan man called Eric Collins for six months now, and getting more and more attached … finally her friends convince her to jump on a plane to Idaho and finally meet him!  Except – she hasn’t been chatting to Eric all this time. In fact, Eric – owner of a Dive Bar in Coeur d’Alene – has no idea who Alex is.

It turns out, Alex has really been chatting to Eric’s brother Joe. He’s the one she’s been sharing her deepest secrets and wants with, unbeknownst to her. But Joe didn’t mean to deceive – it’s just that Eric started his profile and then (as usually happens) abandoned the project not long after, leaving Joe to clean up his mess and cut ties … except then he found Alex, and started chatting to her – and falling for her.

I love this kind of storyline – anything that has a little bit of an epistolary element to it (it’s partly why one of my fave Lisa Kleypas historical’s is ‘Lovein the Afternoon’) and I particularly like this online dating element, which I’m really surprised I haven’t come across in a romance before! (though to be fair, I don’t think I would have sought one out, but now Kylie’s ‘Twist’ has got me looking around for more of this ilk!) I especially love that Alex is a woman who doesn’t have a lot of confidence, especially when it comes to dating … and I kinda loved that when we first meet her, it’s at this very relatable juncture where she’s just been humiliated and hurt by Joe’s (however unintentional!) deception. It’s such an interesting place to start two characters from, with this real perceived “power” imbalance – and it was wonderful to see how they both reacted to this most unusual of situations.

But what I think made this a truly enjoyable – and downright HOT! – romance read and reprieve for me, was Kylie’s usual magic with men, women and relationships … Kylie was actually one of the keynotes at the Australian Romance Readers Convention (ARRC) this year, and she made a great point about why she writes female characters who have realistic bodies – women who aren’t models, who have cellulite, big bums, big boobs, flat-chests. She doesn’t write perfect women, because they don’t exist – and it makes her characters so much more real and interesting.

The only prerequisite for a Kylie Scott book (and she said this at ARRC) was; “A heroine who’s standing a little taller by the end, regardless of the guy by her side,” – and I got that message, plus so much more in ‘Twist’;

Because the same as any man, women were entitled to a fuss-free sex life should they so choose. And it didn't make us sluts, or whores, or any of the other nasty, misogynistic, double-standard bullshit that got thrown a woman's way when she didn't fit with the traditional ideals of who and what a female should be.

I just … really fucking loved this book. I loved Joe and Alex. I love the questions and statements about sex and women that Kylie Scott peppered like fist-bumps throughout. I loved how hot this was, but also sweet and funny. And I really, really loved that Kylie Scott pulled me out of a real-world-sucks reading slump with such a downright enjoyable love story of two genuinely lovely and deserving people.