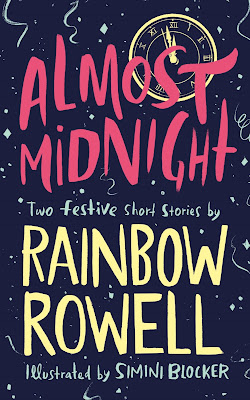 Almost Midnight by Rainbow Rowell is a beautiful gift edition containing two wintery short stories, decorated throughout for the first time with gorgeous black and white illustrations by Simini Blocker.

Midnight is the story of Noel and Mags, who meet at the same New Year's Eve party every year and fall a little more in love each time . . .

Kindred Spirits is about Elena, who decides to queue to see the new Star Wars movie and meets Gabe, a fellow fan.

‘Almost Midnight: Two Short Stories’ by Rainbow Rowell is a limited-edition collection of two of the author’s short stories – one appeared in the ‘My True Love Gave to Me’ anthology, edited by Stephanie Perkins and ‘Kindred Spirits’ was previously published as a World Book Day title. This special pocket-book also includes beautiful illustrations by Simini Blocker.

This book is 127-pages, and both of the short-stories are available elsewhere and have probably already been read by Rowell fans. But kudos to publisher Macmillan, they have made up for this with a genuinely gorgeously packaged book – pocket-sized it may be, but it’s hardback with a sparkly cover and Blocker’s illustrations really are stunning. The whole package is really paying service to the Tumblr and #Bookstagram communities who – arguably – played a huge role in spreading the word about Rowell’s books and put a spotlight on her stories. The fandom is real, and they will be really happy with this collectible, to be honest.

‘Midnights’ is definitely the better of the two stories – as evidenced by the little fandom that main characters Noel and Mags have accumulated since ‘My True Love Gave To Me’ came out in 2015. It’s everything that Rowell is exceedingly good at writing – awkward but loveable female characters navigating self-doubt, but ultimately finding affection from someone who wants them to just be themselves.

‘Kindred Spirits’ is set in a lousy movie line anticipating the first screening of Star Wars: The Force Awakens, and while it is more cutesy fun it does feel like the whole short was constructed around using the (admittedly great) pun “The Force Asleepens.”

Look, I think ‘Almost Midnight’ (retailing at AU$20) is really sweet, and will definitely be snapped up by Rainbow Rowell- aficionados … especially because her last full-length book came out in 2015 with ‘Carry On’, there’s no news on what her next novel will be, her latest ‘Runaways’ comic venture isn’t necessarily going to satiate all of her fiction-fans, and her graphic novel with Faith Erin Hicks (‘Pumpkinheads’) isn’t due until 2019.

I’m going to give this 4/5, only because – from the Australian market perspective – it kinda boggles the mind that a publisher can produce a 127-page mini-book of two short stories that have probably already been bought by the readers (and it costs $20 to do so! Or AU$12.99 on Kindle!) … But, y’know what? – that’s me, I totally bought it! But for teens – they could buy a full-length YA for $16.99 and get more bang for their buck. I just think that ‘Almost Midnight’ is mostly about producing something to be shared on social media …