'Anatomy of a Scandal' by Sarah Vaughan 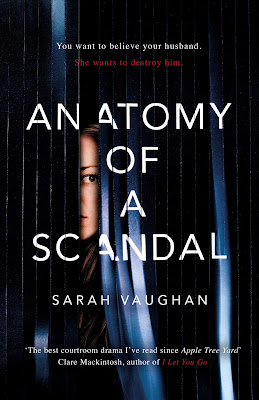 You want to believe your husband. She wants to destroy him.

‘Anatomy of a Scandal’ centres on a high-profile marriage that begins to unravel when the husband is accused of a terrible crime. Sophie is sure her husband, James, is innocent and desperately hopes to protect her precious family from the lies which might ruin them. Kate is the barrister who will prosecute the case – she is equally certain that James is guilty and determined he will pay for his crimes. A high-profile marriage thrust into the spotlight. A wife, determined to keep her family safe, must face a prosecutor who believes justice has been a long time coming.

A scandal that will rock Westminster.
And the women caught at the heart of it.

‘Anatomy of a Scandal’ is a new courtroom drama/crime-thriller from British author, Sarah Vaughan.

So. This was a dud. And I am seriously disappointed that I have started my reading year with yet another disappointing adult-fiction book.

The endorsement quote on the front-cover of ‘Anatomy of a Scandal’ bills it as; “the best courtroom drama I’ve read since ‘Apple Tree Yard’.”  I do not know that ‘Apple Tree Yard’ is, but one of my favourite parts of reading Jodi Picoult for many years was the pattern her books followed – of going from human drama, to courtroom drama and I was hoping to get that same fix here. I also thought ‘Anatomy of a Scandal’ could envelop different aspect of this courtroom drama – maybe the police, prosecution, media pundits … maybe some ‘State of Play’ vibes? Especially as the crime in question – the rape of a woman by a politician who had just ended his affair with her – seemed to be uncomfortably prescient for the times and Time’s Up we’re living in.

The novel is broken down between several narrators – though all told from third-person interiority – the bulk of the story comes from prosecuting barrister Kate, the wife of accused Sophie, and only two or three chapters from the accused himself, Westminster conservative politician and friend to the PM, James.

The present-day chapters leap from 2016 – when James admits to having had a five-months’ long affair to his wife Sophie, then to his being accused of a rape during a clandestine meeting in an elevator, with the woman in question – to the 2017 trial where Kate is prosecuting. But the novel also jumps backwards to 1992/1993 and the year at Oxford where James, Sophie, (now PM) Tom and a woman called Holly were all first-years on a collision course for some alluded-to awful circumstance.

This is an interesting premise, I’ll grant you. On the surface, it sounds a lot like last year’s psychological British drama series ‘Liar’ which likewise breaks down the “he said, she said” faults of the justice system when it comes to rape trials and convictions. There’s also much made of the fact that James is devastatingly handsome, and popular – which Kate as prosecutor freely admits leans on people’s unconscious bias in these matters – in that, I was reminded of another British drama in ‘The Fall’ about a good-looking serial killer (not rapist) but was also playing on subverting people’s assumptions around “villains” in these instances.

But, but, but … ‘Anatomy of a Scandal’ is a sloppy book. All tell, no show. Cheap tricks and no pay-off. And it honestly feels like editorial was rushed to meet the newsworthiness of the book in this moment of women bringing down predatory and powerful men. The book hurts because of that rush (note that the rape victim, Olivia, never gets to tell her story through her own, independent chapters. Because her story and rape is really just a prop for others.) – and honestly, I wondered why it was even green-lit when it actually cheapens the entire wave of change we’re living in right now. To put it bluntly – it’s written more like the sloppy “investigative reporting” (or lack thereof) of the Babe Aziz Ansari piece than the meticulous and precise reporting on Harvey Weinstein by Jodi Kantor and Megan Twohey.

I’ll deep-dive into one of my biggest pet-peeves, but overall – Vaughan summarises. A lot. Even complicated emotions like Sophie first having to grapple with the fact that her husband whom she loves dearly, has been carrying out an affair for five months and is then accused of rape by the woman – all of that is brushed aside. Scenes of James trying to initiate sex for the first time since the scandal broke, and Sophie rebuffing him are later swept aside with oddly tight references to their resumed “lovemaking” later on. At one point in the middle of the trial, Sophie is wresting with her anger and fear for James when she whisks their two children away to the Devon countryside to escape scrutiny – and while watching them, she somehow has a light-bulb moment that ends with her *smiling* at the thought of James getting a ‘not guilty’ and their life going back to normal?

Kate as barrister is another one – early mention to a colleague she is having an affair with but whose wife has recently found out, are alluded to in one tantalizing sentence early on, and then never again. Beyond that, she has no interest or character development – we are repeatedly told that she has high-cheekbones and dresses androgynous, but beyond that … nada.  The tagline literally promises; ‘A scandal that will rock Westminster. And the women caught at the heart of it.’ But the women are hollow.

It’s a sloppy story, over all. One chapter from an entirely different secondary character’s perspective is used purely as exposition – to joint the dots out loud if we didn’t quite fit them all together from the previous chapter – and then we never get another chapter from them, having done their momentary Jiminy Cricket bit.

And though the book claims to be a courtroom drama, this aspect is more ‘tell’ than ‘show’. I can honestly say that reading newspaper accounts of Taylor Swift’s testimony was more heart-stopping, and had more interesting dialogue in the form of witness accounts.

So. This book is a dud when it comes to characters, storytelling mechanisms, writing … basically; everything sucks. Hard. But my biggest pet-peeve with this book was how LAZY and EASY it was.

The level of cliché to James as the “villain” was so frustrating. James and the Prime Minister are ex-Eton men, and all that that entails. They are quite clearly modelled on David Cameron and his set – and early allusions to a scandal during their time at Oxford very quickly conjured memories of “Piggate”, before it’s revealed how much more serious James’s past history is … And of course, these clichés of wealthy and entitled men belonging to a conservative party, largely made up of people who bought their way into positions of power (through socio-economic lottery, lordships, equally entitled family and friendship connections, etc.) while living hypocritical, scandal-filled lives is a cliché for a reason. To the point that James reels off a list of past conservative party men who lived through sex scandals, and still managed to have thriving political careers in spite of (and you bet it was an interesting week to start reading Anatomy of a Scandal at the same time that Barnaby Joyce’s gross hypocrisy was revealed).

So on the one hand – Vaughan is quite justifiably drawing on past public scandals and known political figures to build a believable character of James. His chapters do read on the knife-edge between typical entitled wanker, and outright sociopath – and as a reader you’re constantly asking yourself which he falls into (both, it’s definitely both – because – of course it’s both). moment.

Vaughan leads the reader the same way a lawyer does a witness. There is no gray-scale in this story, no ‘whodunit’, really – no meandering off the path from Point A to Point B. James is an awful character who is awful and shown repeatedly to be awful and is then revealed to absolutely be awful and – oh! – look at the other awful thing they’ve done. Um. Okay? Was … was there meant to be some guess work in this? At one point James says; ‘Look what Blair did with the Iraq dossier.’ AS A DEFENCE. And, reader, I eye-rolled. I eye-rolled hard. WE GET IT. He’s a Tory wanker. So what else is new and interesting? The fact that he’s ex-Eton with the moral outlook of Stephen Miller was just too quiet a characterisation until that line. Ugh.

But part of me wondered if the book wouldn’t have been more interesting, and kept me guessing (as opposed to outright believing James is guilty and thinking the whole thing was a sloppy snooze) if he had been a member of – say – the Labour party? More a Jeremy Corbyn than a David Cameron. As the Time’s Up movement rallies on, there are layers of abuse and gaslighting being revealed – in Hollywood specifically, but also as it alludes to the everyday too. Take the case of Louis C.K. – whose allegations of sexual degradation led to articles examining ‘Threat of Fake Male Feminists’ and ‘17 Types Of Male "Feminists" That Need To Be Stopped’. Joss Whedon’s problematic behaviour involving women and power structures have also been taken to task when talking about toxic ‘male feminists’.

I think this could have been an interesting angle to take a gander at, in ‘Anatomy of a Scandal’. Just as the myth of a rapist being a perfect stranger you meet down a dark alley (rather than somebody known to you, often a family-member) so too is there a myth that once existed but is now being debunked, of a male progressive feminist – with some now revealed to be dressing up as a wolf in sheep’s clothing, to perpetuate harm against women.

As the woman trying to bring a conviction against him, Kate often muses on how frustrated she is that James is such a good-looking man, because it instantly raises the sexist objectifications and biases from the jury (“would he really need to rape someone to get some? A good-looking guy like him?”). But as a conservative running on family values blah blah blah, it’s also deliciously hypocritical that he carried out a five-months long affair and that is an easy mark against him. My thought was how much more complicated could the story have been if, say, James had been a liberal Justin Trudeau-type, replacing ‘conservative family values’ with ‘progressive feminist establishment’? (not that I want such a narrative to come to non-fictional fruition, mind!) But just to shake the narrative up a little bit, and truly keep me guessing as a reader. I hope someone writes that book (if they haven’t already? @ me recs!) – but that someone was never going to be Sarah Vaughan. Jodi Picoult, she is not. Hell – if I’m honest –I’ve seen more complex episode of Law & Order SVU.

This book was an awful, amateur hour soggy “drama”. There’s a ‘Guaranteed Great Read or Your Money Back’ sticker on my copy, and I am honestly thinking of making good on the publisher’s promise for the first time ever on that.

Why was it even called ‘Anatomy of a Scandal’? Is … is this a really crude reference to James’ penis and trying to decipher consent at the point of penetration? I don’t care. I don’t know why I kept reading – I honestly think it was just to see if the last line of the book was going to be; “AND – he fucked a pig, once.” Because – honestly – I wouldn’t have put it past Vaughan to end with one final anvil-drop of subtlety.