'Elizabeth Macarthur: A Life at the Edge of the World' by Michelle Scott Tucker 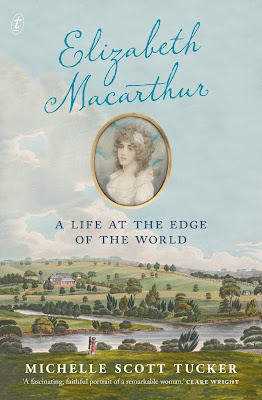 In 1788 a young gentlewoman raised in the vicarage of an English village married a handsome, haughty and penniless army officer. In any Austen novel that would be the end of the story, but for the real-life woman who became an Australian farming entrepreneur, it was just the beginning.

John Macarthur took credit for establishing the Australian wool industry and would feature on the two-dollar note, but it was practical Elizabeth who managed their holdings—while dealing with the results of John’s manias: duels, quarrels, court cases, a military coup, long absences overseas, grandiose construction projects and, finally, his descent into certified insanity.

Michelle Scott Tucker shines a light on an often-overlooked aspect of Australia’s history in this fascinating story of a remarkable woman.

So - full disclosure! - Michelle Scott Tucker is one of Jacinta di Mase's authors, and I work as youth-literature agent for Jacinta. Honestly though, I do not read much non-fiction, let alone historical-biographies. I just don't. So if I wasn't interested in this I just wouldn't have read it, and wouldn't say boo about it. The fact of the matter is, Michelle is a Jacinta di Mase client AND I genuinely thoroughly enjoyed this book. The two are exclusive :-) But I picked this one up (despite aforementioned minimal interest in the genre) because: 1) - Even though it feels like we studied 'The First Fleet' and colonisation of Australia every freakin' year in primary school, I had no clue who Elizabeth Macarthur was. I really had zero knowledge of Australia's female founders generally. and 2) - the blurb had me so thoroughly intrigued: "In 1788 a young gentlewoman raised in the vicarage of an English village married a handsome, haughty and penniless army officer. In any Austen novel that would be the end of the story, but for the real-life woman who became an Australian farming entrepreneur, it was just the beginning." You throw Jane Austen out there, and I'm going to pick it up! And I've gotta say - 'A Life at the Edge of the World' 100% delivered for me, and I was so happy that I read outside my usual comforts and gave this a go. I truly found it to be such a nourishing, fascinating, and eye-opening read. Not to mention - it was just damn enjoyable, and easily one of my favourite books of 2018 so far. So, probably my last encounter with historical biography was my attempt at reading 'Alexander Hamilton' by Ron Chernow because of my HAMILTON the Musical and Lin-Manuel Miranda obsession. I got about 100 pages into that 818-page tome though, and had to throw in the towel. It was interesting but mired in minutiae I just couldn't pretend to care about. I will say though, that Chernow had a lot of documents and correspondence and just general first-hand pieces of information to wade through in building a picture of a man who did indeed; "Write day and night like you’re running out of time?" Michelle Scott Tucker has a slightly bigger obstacle in her way, in that her biography is largely built around Elizabeth's diary - documenting her marriage and voyage to Australia, and years in the established colony, and also her correspondence home. And as Tucker says early on in the book, much of Elizabeth's writing is tempered by her knowledge of an audience. She kept her diary, knowing full well it was an artefact she'd be passing onto her children so they'd have a keepsake of their life in this new land. Likewise, her letters home are slightly coloured by a wish to convince her friends and family (and put them at ease) that she and her husband John are doing fine and flourishing. But this biography, and indeed Michelle Scott Tucker's true talent - is in filling in the blanks, both logically and emotionally so. And you get this sense from her at the very beginning, when she goes over the fact that Elizabeth had a miscarriage during her voyage to Australia;

Convict ship Scarborough was no place for a gentleman's daughter. Elizabeth Macarthur was cold, pregnant, and bone-weary. The Southern Ocean pummelled the ship with storm after storm and her soldier husband and infant son were both grievously ill. Elizabeth prayed.

Somewhere on that roaring sea, exhausted by her nursing duties, and constantly pitched and tumbled, Elizabeth was 'thrown into premature labour, & delivered of a little Girl who lived but for an hour.' There was no one on Scarborough to help. No other women were on board, and the ship's surgeon was unlikely to have been sober, let alone skilled. We only know of the nameless baby's existence from a single line in a letter Elizabeth wrote to her mother, many months later. There is no record of a shipboard funeral, no record of where the small bundle wrapped in weighted canvas was delivered to the sea, and no record of Elizabeth's grief. All we have - all Elizabeth had - is that single tragic hour.

Chills. And I knew I would be in good hands from the moment of that premise - and indeed, I was. Scott Tucker's empathy, interest and respect for Elizabeth Macarthur is so apparent throughout the book - it makes her story sing. I was actually surprised at the suspense created within the pages, but Scott Tucker masterfully leaves each chapter on a note of suspension and intrigue, and I did find myself rushing back to read. Scott Tucker also doesn't shy away from the inherent discomfort of writing about a 'founding family' of Australia, when ours is a nation of First Peoples and rightful owners. She navigates this aspect with the utmost respect and tenderness, and I was appreciative of the education she also gave me about our Indigenous historical figures - like Bennelong and Pemulwuy. As well as the (oft unheard of, because there were so few) positive interactions between colonists and First Peoples, particularly by those British who went to great lengths to learn from and about Indigenous populations - like William Dawes, who was an astronomer, engineer, botanist, surveyor, explorer, abolitionist and first person to record Aboriginal languages when he befriended a young woman called Patyegarang, who became his language teacher. And, yes, William Dawes sounds like a total spunk, his relationship with Patyegarang completely fascinating and sweet (but never improper - though one recorded phrase she taught him was; "Putuwá: to warm ones hand by the fire & then to squeeze gently the fingers of another person" and yes I SWOON!) I also loved that Michelle Scott Tucker doesn't try to impose a modern sensibility on Elizabeth Macarthur (who had really interesting relations with local Indigenous populations, but could still refer to them with the distressing disposition of a British invader) ... BUT, Scott Tucker does wonder if we can also judge Elizabeth by the company she kept - and funnily enough, William Dawes was a dear friend of hers, who taught her the stars. So there's that.I rollicked through 'Elizabeth Macarthur: A Life at the Edge of the World' in a way I was never going to with Chernow's Alexander Hamilton biography. BUT - I think there is something of the Hamilton's to the Macarthur story, and certainly Michelle Scott Tucker's spirited writing of history is something I think even Lin-Manuel Miranda would applaud. I mean - the events of 'Hamilton The Musical' are going on while Australia is *just* being colonised. There's no comparison to story and narrative ... except that Elizabeth's husband (who was a bit of a moron, but whose heart seemed to sometimes be in the right place?) did LOVE a duel. And I genuinely think Elizabeth Macarthur and Eliza Hamilton would have got along like a house on fire as they commiserated over their brilliant but inept husbands who left the telling of history to the ladies and whose stories were, often, even more compelling than their famous husband's. Just sayin'! I really can't do justice to this book or Elizabeth Macarthur's extraordinary life! I can't even begin to tell you the ways Michelle Scott Tucker further elucidated on my abysmal early Australian history education, or the ways she bought this time and place to life for me. I love, love, loved this book and even if you *think* that historical biography isn't for you, you're guaranteed to love it too.