'Harbor Me' by Jacqueline Woodson 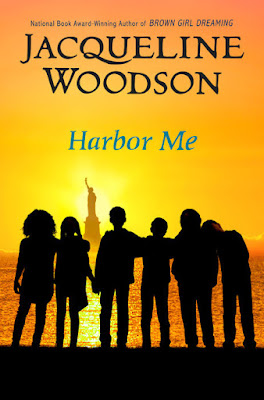 It all starts when six kids have to meet for a weekly chat–by themselves, with no adults to listen in. There, in the room they soon dub the ARTT Room (short for “A Room to Talk”), they discover it’s safe to talk about what’s bothering them–everything from Esteban’s father’s deportation and Haley’s father’s incarceration to Amari’s fears of racial profiling and Ashton’s adjustment to his changing family fortunes. When the six are together, they can express the feelings and fears they have to hide from the rest of the world. And together, they can grow braver and more ready for the rest of their lives.

I miss the beginning of our story together. And the deep middle of it.

Jacqueline Woodson's 'Harbor Me' is easily one of my Top 3 favourite books of 2018. It's a middle-grade of only about thirty-thousand words; but the economy of language is even more remarkable, considering the heartbreakingly big ideas and topics being explored within. Woodson has spoken about how she wrote this in the middle of America's shifting and toxic attitude towards immigrants, and in particular; increased powers to Immigration and Customs Enforcement (ICE), and less rights for recipients of Deferred Action for Childhood Arrivals (DACA). For a book that was written right in the midst of so much hurt and pain, what Woodson has achieved is a remarkable feat of equal parts tenderness and bitterness, hope and resistance. It's about six children with various learning difficulties, who are put into a trial classroom and made to thrive with a caring teacher who encourages them to listen to one another, and speak their truth too, in the ARTT room (A Room To Talk) amongst themselves. Our protagonist is Haley - who is recording everyone's stories - she's a biracial girl whose mother died tragically, and is being raised by her uncle, while her white father is in prison and soon to be released. There's also Ashton - a white child at a predominantly black middle-school, who has to start thinking about the ways his life is different and will continue to be, from his fellow classmates - simply because of the colour of their skin. Esteban's father is currently being held in detention in Florida, after being caught by ICE agents - his family don't know his fate, and are themselves hiding out with relatives, lest they be detained too. The other children have their own plights and insecurities - like a father telling them they can no longer play with toy guns, and a mother who will no longer speak Spanish in the street for fear of having racial abuse hurled at her. These kids are discussing big ideas amongst themselves - like how they speak the 'Pledge of Allegiance' but don't really feel free, and when their teacher asks them to think of the Lenape first peoples of the land they're standing on - and whether or not they would have fought with them to keep their land, or been one of the invaders taking it away? This book is a product of 2018 in many ways - but because of that it also feels timeless, because of the deep hurt being inflicted on society (and around the world) right now. Woodson carves these marks in 'Harbor Me', knowing we'll be dealing with the repercussions of these actions for generations to come. 'Harbor Me' though, feels like a celebration in so many ways. Even at its most heartbreaking. Because the children read true - they feel like an honest reflection of our next generation currently living these times and asking questions, while deciding that it'll be different with them. Because they'll make it so. Jacqueline Woodson is one of my favourite authors of all time. Reading her is like coming up for air. She's the kind of author that makes you want to be a writer, and feel so grateful that you get to be a reader too. 'Harbor Me' is one of her best, and that's saying something.