'The Silent Wife' Will Trent #10 by Karin Slaughter 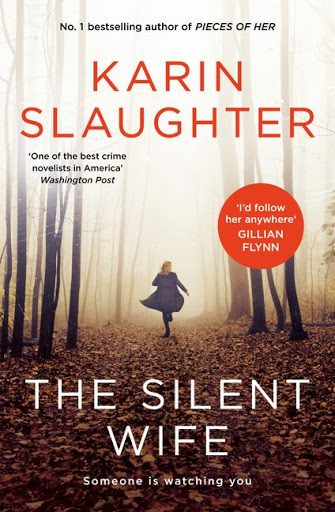 A woman runs alone in the woods. She convinces herself she has no reason to be afraid, but she's wrong. A predator is stalking the women of Grant County. He lingers in the shadows, until the time is just right to snatch his victim.

A decade later, the case has been closed. The killer is behind bars. But then another young woman is brutally attacked and left for dead, and the MO is identical.

Although the original trail has gone cold - memories have faded, witnesses have disappeared - agent Will Trent and forensic pathologist Sara Linton must re-open the cold case. But the clock is ticking, and the killer is determined to find his perfect silent wife ...

‘The Silent Wife’ is the 10th book in Karin Slaughter’s ‘Will Trent’ crime series, and the 20th published book in her career that started in 2009 with the ‘Grant County’ series and the characters of Police Chief Jeffrey Tolliver and his ex-wife coroner, Sara Linton.

Now – spoiler! – Jeffrey was killed in the sixth book of ‘Grant County’ (called ‘Beyond Reach’ and alternate title ‘Skin Privilege’) then Sara transitioned to the established Will Trent series, where over the course of the last eight or so books, she has started a relationship with Will.

This is all important to note because for the first time since his passing, Jeffrey is back. Kind of. ‘The Silent Wife’ sees one of Jeffrey’s old cases and convictions unearthed when a prisoner who swears black and blue that he’s innocent, points Will Trent and his partner Faith Adams (both of the Georgia Bureau of Investigation) to a potential killing spree for which he was imprisoned, but if his hunches prove true then it means a serial rapist and killer has been on the streets for eight years … the book flashes back to the case unfolding as it did then eight years ago when Jeffrey was chief of police at Grant County, shady cop Lena Adams was just starting out and screwing up, and Jeffrey and Sara’s divorce was only a year old and still raw over his uncovered unfaithfulness. The book switches between Sara and Will in real-time backtracking over the case to see if there are fresh clues and new murders, and Jeffrey in the past working in real-time of the past to track down someone who is murdering female students from the local college.

Now let me just say – I have never been so floored by the loss of a fictional character as I was by Jeffrey Tolliver. I – and all ‘Grant County’ fans – were completely stumped and horrified by that twist we never saw coming, and I think in many ways we’ve all been (much like Sara) grappling with it ever since. After reading ‘The Silent Wife’ I even went back to ‘Beyond Reach’ and read that last chapter again and … tears. Floods of tears. Just like the first time it sucker-punched me.

So when I flipped the page in ‘The Silent Wife’ to find a chapter in Jeffrey’s head as he was then – I gasped. I cried. It was like a pressure-valve lifting and all the old hurts over his loss came flooding back because it was also so damn good to have him back. And this is where Slaughter I think knows her audience so dang well, because I’m sure I’m not alone. I am sure that (again – keeping pace with Sara’s emotional trajectory) majority of us were probably at the point of finally being fully invested in the ‘Will Trent’ series and his and Sara’s relationship … to then yank us back to the past heightens everything. Brilliantly. Viscerally.

This is of course why Slaughter did it. ‘The Silent Wife’ even unfolds with Sara and Will at a precipice point in their relationship (he’s proposed but … abysmally. They both agree to circle back to talking about it but never do and suddenly six-weeks have passed and they can both feel the clock ticking as to what to do about their relationship).

Meanwhile; Sara and Jeffrey in the past are at a point in their relationship that readers have only gleaned second-hand from both parties. The time before first book ‘Blindsighted’ when they’re in the thick of their animosity over Jeffrey’s cheating and subsequent recent divorce (even if it’s blatantly obvious that there’s still love there, it’s only amplifying the hurt right now).

At both points in time Sara is on the edge with the two men in her life – down one path we know that she and Jeffrey reconcile and give it another go that only ends with his murder. But in ‘The Silent Wife’ the events of ‘Blindsighted’ haven’t happened, and Sara has yet to confide in Jeffrey all the truths of her past, including her own rape when she was in college.

Down the other side we have Will and Sara – crazy about each other, but still plagued by their respective pasts. And the reopened case presents an opened wound to be exposed; Will is literally coming face-to-face with the ghost of the late, great Jeffrey Tolliver. The love of Sara’s life, who Will wonders if he’ll always feel second-best to as he grapples with the reality that had he not died – Sara would still be married to him. And Sara is trying to squeeze her love and missing Jeffrey around the way her heart has expanded to need Will, to love him dearly.

It is SUCH a good place for this story to spin around. Absolutely, delicious and juicy and exposing the very reason I kept coming back to this series – the relationships.

In fact, at the back of the book in a spoiler-filled Author’s Note, Slaughter outright admits; “I bet you guys didn’t notice that I’ve been secretly writing love stories. Really gritty, violent, love stories, but still.” I noticed. Lots of us did. I started reading Slaughter’s ‘Grant County’ series when I was 22(!!!) and actually – fun fact! – ‘Blindsighted’ was the very first book I reviewed on my blog! It was the first proper-proper crime series I delved into and it was the tension-filled relationship of Jeffrey and Sara that hooked me (aside from a great whodunnit procedural) I wouldn’t have kept coming back to this series if I didn’t love the characters and want to see the best for them. And ‘The Silent Wife’ is really sticking them all under a microscope in the most amazing, curious way.

There’s so many layers in this book.

It’s also fascinating to see Slaughter admit that Tolliver maybe wasn’t the best police officer like everyone (and probably fans) remember. That’s illuminated in ‘The Silent Wife’ and a case that is literally spun around Jeffrey missing clues and letting a killer get away. It’s also highlighting Lena Adams genesis as a dirty cop … I’ve never liked Lena (I mean; who does?) but I’ve also been bitingly aware of the fact that when we met her in ‘Blindsighted’ it was on her worst day and one that irrevocably changed her – the murder of her sister. What’s fascinating in ‘The Silent Wife’ is – we see the actual genesis of Lena’s foolhardy broken morality just beginning. In stupid, human mistakes sure – but also in Jeffrey seeming to make the connection that she could be what Will later dubs his “grey rabbit”, a cop who gets her hands dirty so others can keep theirs clean, she’s will to go down the rabbit hole of grey-areas.

And here I’ll just say – Lena is also in the present and being interviewed by Will and Faith, and much like our spidey-senses were tingling in anticipation of Will’s ex-wife Angie coming back, Lena’s presence in ‘The Silent Wife’ really works to drop breadcrumbs that Slaughter is not done where she’s concerned. She seemingly got her happily-ever-after with Jeffrey’s son Jared and a baby on the way (I dread her rubbing that in Sara’s face like I know she will) and Faith Adams has the best summary of this seemingly perfect life for one of the most undeserving individuals, when she says;

“Fucking Lena.” Faith flapped down the visor to look in the mirror. “How did that bitch get J.Lo’s life with Lizzie Borden’s personality?”

But I am of the belief that Dr. Martin Luther King Jr. was right; "The arc of the moral universe is long, but it bends towards justice.” I think we haven’t seen the back of Lena and her toxicity, but I also believe that she will be exposed for who she really is. Eventually.

At both points in time, we see Sara at a fractious point in both her relationship with Jeffrey and Will. What’s interesting is how differently those trajectories play out, but also what’s illuminated as we observe the men satelliting around the women they love. For Jeffrey, we see him rewriting history and changing the narrative … the same way Lena Adams does in her field-notes. Will has really grown as a character, and though it’s all internalised – we see him reasoning out and talking through his emotions and why he’s experiencing them. That’s Sara’s influence crowding out his head and heart.

What was almost uncomfortable for me to realise while reading ‘The Silent Wife’ was … poking at the idea that maybe Will is the better suitor overall. Much as Jeffrey was – well, Jeffrey. Brilliant and charismatic, bull-headed and egotistical – someone who hurt Sara deeply and repeatedly, but also loved her like no other … Slaughter’s Author’s Note also highlights this when she says she knew Will was going to have to earn Sara’s love. Both between them, and for fans. And reading ‘The Silent Wife’ and the healthier way that he and Sara confront the pitfalls of their relationship head on (eventually) – it’s abundantly clear that he’s done that. Tenfold.

I was uhmming and ahhing whether or not to give this book 4.5 stars or not. The only criticism I have is the whodunnit was very obvious and I had it figured out within a few chapters. But looking back at all the juicy tension and character development and retrospectives … and knowing that this book is Slaughter at her absolute *best* and highlighting the complexities that make her series so wonderful, I am convinced that she always meant for there to be an element of the obvious for the whodunnit. Because a lot of this book is observing the things that are right in front of our faces, but we’re not yet ready to confront and examine or admit to ourselves.

So it’s five-stars from me, and a hearty wish that I already had details of what’s next from my favourite of all crime-writers.